Home Archives Profile Subscribe
The Sounds of the Azores
Too Much 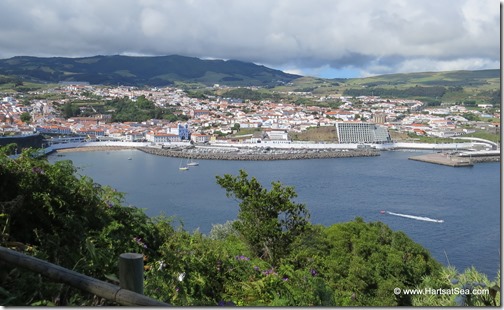 The Azoreans are friendly and they love to assist you with their language. This means they are friendly and will correct and teach you at every opportunity. I welcome that, so I get corrected a lot.

We expected Portuguese to be much like the Spanish language. Well it is, and yet, in surprising ways, it is not like Spanish at all. Having just left the Caribbean where we have been trained to greet each person on the street, we worked to learn how to greet people in the Azores (and mainland Portugal). My first “instructor” was the lady who managed the shower and laundry facility in Faial.

First, I learned to say “Bom dia” for good morning, and “Boa tarde” for good afternoon. I learned that “por favor” is please and blithely assumed that “gracias” must be used for “thank-you”. That brought a frown.

“Really? OK, Obrigada!” I replied and she nodded and smiled.

Now, we knew enough to show interest in the language and therefore to be corrected by any willing native speaker.  After EW said “Obrigada” to someone, we learned that one says “Obrigada” to women, and “Obrigado” to men (though you can say that to genders). And it’s not “Oh bri ga doh”, it’s Ob bri ga due”. If you get confused, anyone can simply say “thanks” by saying “obrigad” – but never “Gracias”, because that’s Spanish.

On the first day in Faial, we learned good morning, good afternoon, please, and thank-you, and I felt quite accomplished..

A couple of days later as I went into the laundry area for the second time that day, calling a cheery “Bom dia!” she replied “ola!” I stopped. “So I can’t say, “gracias” but I can say “ola”? Isn’t that Spanish?” 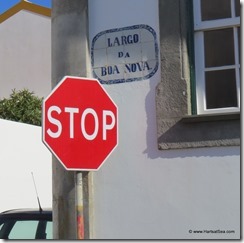 It turns out that their official word for “good-by” is “adeus” but I’ve heard no-one use it. Like the stop signs in Europe, it seems that many Europeans have adopted “Ciao”. We’ve heard it from Belgians, French, Germans, and many, many Azoreans.

Both EW and I thought that the Portuguese language sounded Slavic to our ears. We were delighted when Barry and Maggie from S/V Elska agreed with us, and we all discussed it with our, Azorean/American friend Leo. Mostly, it’s because of the “s”. If an “s” is used at the beginning of a word or syllable it is pronounced with the sss sound. If it comes at the end of a word or syllable, it has a soft “sh” sound, like in the word wish. The town of Velas on Sao Jorge, is pronounced “Vay-lish”. While two glasses of red wine is written as “Dois copos vinho tinto”, it’s pronounced: “Do-ish co-posh vin-u tin-tu”. (All of the “O” sounds in this sentence rhyme with doe, a deer.)

Imagine my delight when I downloaded information about pronouncing Portuguese and found this:

Don't assume that Portuguese is just like Spanish. Though they are very closely related languages, and a knowledge of Spanish will certainly help you in pronouncing Portuguese, the two languages don't actually sound that much alike. Portuguese shares some idiosyncrasies with French, and to anyone unfamiliar with the vocabulary of Romance languages, it's equally likely to sound like Russian. (Italics mine.)

OK, (everybody says “OK”, too), we’re trying to get it right. We try to learn new phrases daily and ask anyone who will be patient to help us. I finally learned how to say “Please excuse me” the other day. Can’t spell it, but it’s “Dosh-cul-pe” and while that last e is a final syllable of “eh” it’s barely pronounced, more of a breath after the hard “p” sound.

We like these islands and the people, and we try to show our admiration and respect by respecting their language, but we are very thankful that most people speak English. Otherwise, how would I have ever ordered those first two glasses of red wine?

We had our neighbors over for a cockpit party in Sao Jorge. With, me here are:

Our friend Leo took that photo. Here’s one that includes him. Leo speaks idiomatic English with a Portuguese accent and is afraid that he now speaks Portuguese with an American accent. 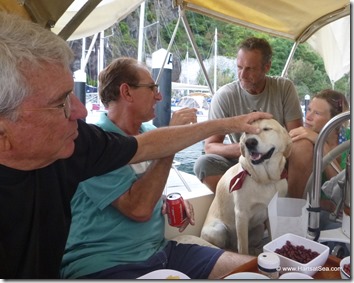 A couple of days later I discussed pronunciation with Barry and Maggie who brought up “the Queen’s English”. Barry taught me this:

Put them all together, “Hair, Air-Lair” and  you have “Oh, Hello” in the Queen’s English.

(When you try this, it helps to smile slightly and move your lips as little as possible. Also, pronounce the “r” sounds like we do in Maine – not at all!)

And we think Portuguese is hard! (Pronounced Hahhd!)

NOTE: The photo at the top was taken on a hike up Mount Brasil in Angra. The sailboat on the right is La Luna.

And now that we've shared this affair of the hair, I think I'll repair to my lair and use Nair. Do you care?
- George Carlin.

Too funny. Great to hear from you.