Sunday with the Rental Car in Sao Jorge - Home Food, Limpets, and Tomatoes 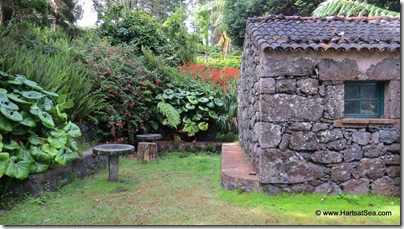 One of the problems with writing about  touring the Azores is that it’s hard to know when to stop. A blog post about a particular day is full of events, food, and people and leads to additional discussions about other similar events, more food, some of the same people and new ones. These islands are small with few inhabitants, and if one stays here any length of time, everything relates, so it’s hard to know when to stop and one blog post could go on forever. 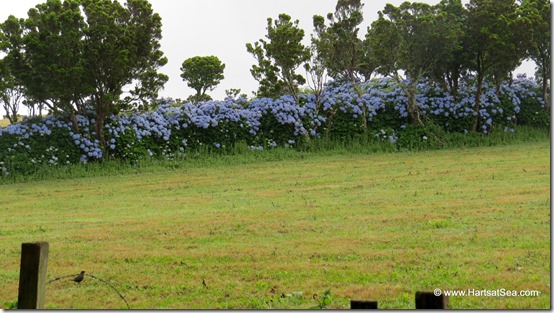 A case in point is the first of the two days when we rented a car in Sao Jorge. We left Velas and took the southern coast road heading northeast to Ponta des Rosais and the national park. We walked the trails through the charming park, drove between pastures of grazing cattle bordered by stone walls and those beautiful blue flowers, and viewed the lighthouse and rocky coast below. After a few hours, we left Rosais along the northern coast road, stopping often to photograph more hydrangeas and other sights which happened to have hydrangeas in them, and took a brief detour to visit Faja do Ovidor. (Some of those photos have appeared in a recent post: A Profusion of Hydrangeas.) By one o’clock on the Sunday in question, we had visited a park, a lighthouse, and a faja. We had taken many photos, enjoyed deciphering the road signs, and marveled at the portable milking parlors, and open trucks with (to our mind) old fashioned metal milk cans. We were on our way to Calheta, where they were having a festival. Before the day was out we would enjoy a “home” meal at a festival tent, view our first Tourados da Corda, and meet a number of people who call the US or Canada home but who were born in Sao Jorge – the most important of whom would be Leo from Watkinsville California. The fajas, the tourados da cordas, Azorean food, and Leo would become frequent topics during the next two weeks.

First, let’s talk about lunch: Our plan had been to cross back to the south road and find our way to Calheta and the festival. EW was hungry and turned into the parking lot of a busy restaurant. It looked like a nice place but I wanted to eat at the festival, not a nice restaurant on the sea. The driveway and shape of the building actually reminded me of one of the seafood places along the stony end of York Beach in Maine; I wanted something a bit more adventurous than that. EW consented to keep going and a few blocks later we found the small festival, complete with food tents. 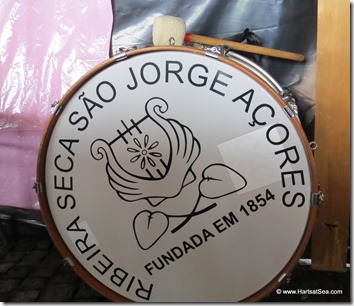 The tents appeared to be fund-raisers for specific groups. The largest tent was actually three: a bar, seated dining, and a kitchen with grills. We stopped at the bar and asked the bartender for a menu. He held up one finger to ask us to wait a moment and returned with John, who speaks English. The menu sounded good, we went into the restaurant side and sat at one end of a three long tables - just like at a Grange Hall Dinner. John’s daughter, home from the university in Lisbon for the summer, waited on us. EW had “frango churresco” or barbequed chicken. I asked the young accounting major if they offered a local dish. She said the fish dish – “bacalhau seco”- was “of the home”, and I opted for that, assuming from the familiar sounding name that it was a salt cod dish. (In Grenada, a salt cod meal generally served for breakfast, and somewhere I picked up the Italian name bacala. I was feeling like a world traveler.) Our waitress plussed us up with an appetizer of “lapis” (limpets in English) a local delicacy served raw or cooked. These were grilled. I had wanted to try them and am glad I did, but probably won’t add them to my list of favorite sea foods. The food was excellent, and we enjoyed the company even more. These were the musicians, director, and board members of one of the local town bands. The band has been in existence for over a hundred years; John and his two daughters are members, and his wife was one of the cooks in the kitchen tent. We had arrived just after the normal time for lunch and were one of the last parties served before the group got their meals and sat at a table near us. Some of those who spoke English dropped by to chat with us between bites. These were people who had stayed in Sao Jorge and raised their families here. John worked for the town, one of his girls was in high school, but planning on college and probably that neither she nor her older sister will live in Sao Jorge after college. All the people we met had family in the US or Canada; some had lived abroad a few years themselves before returning to Sao Jorge to settle down.

At one point near the end of our lunch, an older gentleman carrying a shopping bag stopped by to talk with John and the group. I had greatly enjoyed the municipal mercado (public market)in Horta and the fresh fruits and vegetables we purchased there, and had been disappointed not to find a similar market in either Velas or Calheta. The gentleman carried a plastic grocery bag full of the most beautiful tomatoes I’d seen in three years. “John, can you please ask your friend where he got the tomatoes?” John was a bit surprised at my request but not at the gentleman’s answer. “He grew them himself.” “Will he sell me a few?” I asked. John relayed the request and this wonderful man gave me the whole bag! I was embarrassed and concerned I’d taken all of his bounty, but was told that he had picked them to give away as more were ripe than he could eat. I “obrigadu’ed” him profusely, smiled, and even clapped my hands with delight.

We later found out that many folks have small gardens, whether they live in town or in the country, and relatively few must purchase vegetables in season. We also later met Maria Joao in her store in Velas, and I was able to purchase excellent fruits and vegetables there. But that day, those tomatoes were more precious to me than gold. There were also too many. First I offered to take only some of them, but that wasn’t allowed. Once the gentleman had wandered along, I offered them to various members of the band, but they all grew their own or had neighbors with ripe tomatoes hanging from the vines.

After lunch EW and I took the tomatoes to the car and put them in the cool bag we’d brought for our waters and snacks. I wasn’t going to can tomatoes and already had home-made pasta sauce in the freezer, so EW and I decided to share our bounty with a few cruisers. At the end of our day, we invited ourselves aboard S/V Elska where Barry and Maggie had two other couples on board for snacks and drinks. I  accepted a glass of wine from Barry, portioned half of our tomatoes among the three boats, and all of us were delighted.

Back at our lunch in Calheta, I had noticed that there was one American word prominently displayed on the menu board: Donuts.

Donuts? Absolutely. The Azores are known for their sweets (so much that I find it amazing to have seen very few obese Azoreans) and evidently the emigrants to the US sent back -- or returned with --- a love of and recipes for donuts. Like beautiful vine-ripened tomatoes, we hadn’t had a real donut in three years. We shared one for dessert in Calheta. Thus fortified, we finally pushed ourselves away from the table, and went in search of the Tourados da Corda, where we met a number of vacationing Azorean/Americans – most especially, Leo.

More on the bulls and Leo in the next post – and in subsequent posts as well. Tourados da Corda is a “thing” in the Azores. Leo became a “thing” with us. Trust me.

4. Bass drum from our hosts’ band.

5 and 6. Lapis (pronounced Lap-ish) and my salt cod “at home” dinner

7. Our hosts. John is standing on the left  in the sleeveless red tee.

8. Bag of  tomatoes my dad would have been proud to grow.

Find My Ride New Zealand aims to become New Zealand’s most unique and interactive business in the transport industry. Spanning from car rentals through to car sharing. Our business wants to be the first call for both tourists and New Zealander’s.