Sunday with the Car in Sao Jorge … and Leo 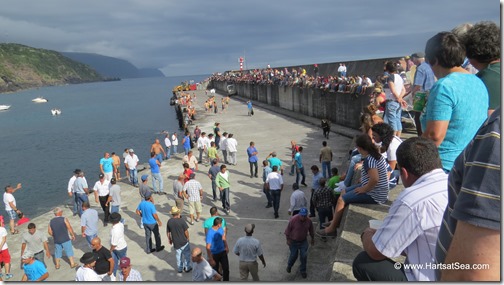 On our epic Sunday in Calheta, two farms each presented two bulls with their team of handlers, with a half hour intermission for the switch from one farm to another. EW went off in search of music and a beer, and I wandered along the top of the wall and watched the people. I heard someone say, “Did you get any good photos of the bulls?” and when I turned I recognized a gentleman who had moved to give me a better shot during the last run. “I hope so, thank you.”

And so I met Leo who introduced himself and his cousin, Manuel. Leo was born on Sao Jorge, and emigrated to California with his parents and siblings when he was 15. He said his folks planned just to stay long enough to pay off the land they owned in Sao Jorge and save up some extra money, but their kids grew up and had kids and they all became citizens and stayed. His folks are close to 90 and still like to return to the Azores each summer. Because Leo didn’t think they should be alone for three months he took three weeks of vacation time from his job as a U.S. Postal Carrier and brought his folks to the island. 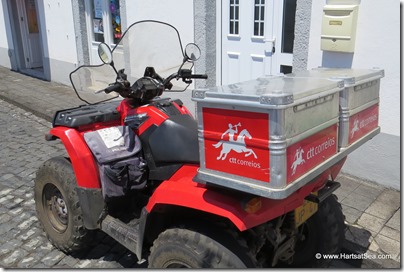 (At left: A postal “van” in Calheta. When I took this, I had no idea we’d meet an Azorean/American US Postal Carrier from California.)

Of course it was easy for Leo and Manuel to see that we were tourists with no ties to the Azores or to Portugal, so Leo asked about our vacation. I’ve learned to say that we are on a barco a vela– a sailboat. (I speak English with Portuguese words thrown in as I know them. So far that works pretty well.) We talked for about ten minutes, with Manuel saying not a word in English, and few in Portuguese – until they asked about our plans for the island.

When we’d visited the tourist information center, we had been helped by Lena, who takes her job very seriously. Sao Jorge is known for its forested parks and trails and there are seven trails that are promoted to tourists. There are seven maps for the seven trails, and Lena carefully explained all of the walks, marking and numbering each of them on our master map of the island. EW and I decided that on our second day with the car we’d hike the Number 1 trail. Lena had been careful to tell us that it was a 10 kilometer one-way trip. She suggested that we drive to the starting and highest point, walk to the end and get a taxi to take us back to our car.

EW is -- shall we say “optimistic” about what he, I, and any others he cajoles can do on a hike. (Any of you remember the infamous “Death March” in Grenada?) He suggested that we plan on driving to the high point, walking down and returning back to the car by foot. What’s 20 kilometers among lovers? I cautiously agreed, but reserved the right to call a cab, and I blithely told Leo and Manuel our plans. This is when I found out that while Manuel doesn’t speak much English, he understands it very well. As soon as I voiced our intentions for Monday, Manuel began speaking in rapid-fire Portuguese to Leo, beginning with, “Nao!” I knew “No!” when I heard it. 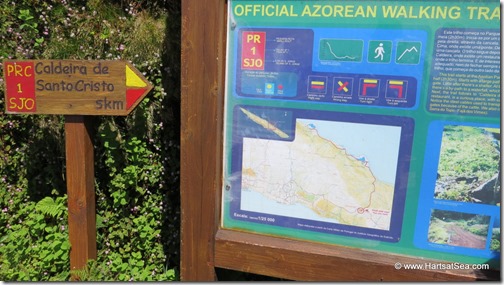 There was a spirited three-way discussion with Leo going back and forth from American-accented Portuguese to Portuguese-accented English. It turned out that Leo’s younger son had completed walk Number One a few years back, but Leo had never done it and wanted to. Manuel had to work on Monday, but that didn’t stop him from making plans for us. Leo’s parents’ car was in the shop waiting for parts from Lisbon. However, he would meet us in the square or praza in Velas and we would take our car to the end point of the hike and leave it there. Leo would arrange a ride from there to the starting point. We’d hike from the top down, and simply drive back to Velas once we finished. Manuel was relieved.

EW joined us shortly after I had made this arrangement, and I introduced him to Leo and Manuel and informed him on our new plans. It says something about some of EW’s finer points that he readily accepted their advice, and welcome having Leo -- who was essentially a strange man I picked up at a bullfight -- join us. Just then, the rocket went off, the bull was out, and we all chose our spot to watch the next round of tourados da corda.

The next morning, Leo met us at the marina and tracked down a taxi driver who has retired back home in Sao Jorge after living for many years near Leo’s California home in Watsonville. Marco followed us to what would be the end of our hike at the Faja dos Cubres, then took us in his taxi to the overlook near the wind generators that is the start of hike Numero Um. 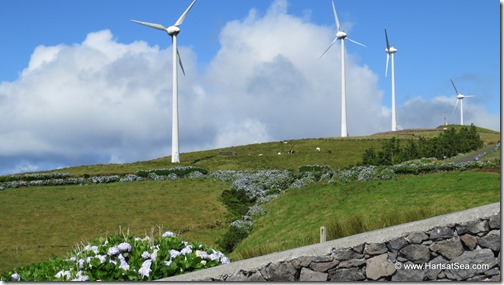 This taxi driver was the first of many people we met through Leo – most of them from Watsonville California or that area of the state. Leo is an extrovert, charming, and funny. Once his parents were settled for the morning he would take his camera and wander the town. Over the next few days, we would invariably meet Leo on our way to the mercado (grocery store) or on a walk in the early morning. We met him so often that I joked  that there had to be three of him and EW thought he must be a CIA spy. Each time we met him, he introduced us to someone who was born in Sao Jorge and who now lived in Watsonville. We met so many people from Watsonville that we wondered if the last person who left for vacation had turned out the lights. 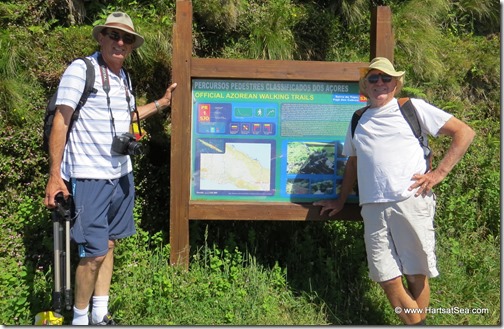 We may have started our Monday in a taxi with a stranger, but by the time we ended our day at Faja dos Cubres, we had made a new friend in Leo – who may have saved our marriage. Finding a taxi at the bottom of that faja would have been very difficult and If I’d had to walk back up that mountain, I would have killed EW.