Still Sunday With the Car in Sao Jorge–Tourados da Corda

We had gone to Calheta on our Sunday drive because we were told they were going to have a Tourados da Corda – Bullfighting on a Rope --as part of the festivities. This tradition was developed on the island of Terceira and has spread to the other islands in the Azores. According to one of the tourist websites:

In this modality the movements of the bull are conditioned by a rope held by a group of men, formerly called “mascarados da corda” (masked men of the rope). The bulls, bred in the pastures of Terceiras’ central region, are chosen for their ability to follow figures and be cunning. The bull, with its horns padded, is then let loose on the streets of the parish, the windows and balconies of which are crowded with people eager to cheer the spectacle. Fireworks are set and men and bull immediately start running about, with steps that are sometimes luckier than others… "Bullfighting on a Rope" has evolved with the passing of time and now held in locations such as near the ocean, on beaches and shallows where boats are run upon for repairs. In it, everyone, including the bull, takes repeated baths in salt water in the midst of the laughs, shouts and hisses of the spectators.

The break wall and cargo/ferry pier in Calheta creates a small harbor that may offer some protection from the north and west. The harbor side of the break wall is the ferry and cargo dock. The break wall itself rises up about 15 feet and steps at both ends allow walkers, fisherman, and view seekers to walk along the wide top. It’s the perfect safe seating zone to watch the Touradas a Corda.  During the festival,  jet ski races roared on the west side off the pier,  while on the harbor side, they held races for kids steering smaller (and hopefully slower) jet skis. Just a bit closer to shore someone had set up a ride along a cable for which participants were delivered via dinghy to a small navigable cliff, clambered up to the top, hooked their harness into the cable and slid down into the water. Nearer shore, kids and adults were swimming to cool off during the heat of the day. As we watched all of this, more and more people began to fill in along the upper level of the break wall; cars and fisherman moved off the lower inner level, and two flatbed trucks arrived, each with two large wooden crates. 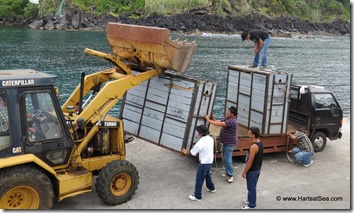 Each crate contained a full grown bull. I was nonplussed as we watched the drivers, bull handlers, and front end loader operator work together to move a crate full of bull from truck to the far end of the break wall. Once the four crates were lined up, the first group of handlers got out a very long, heavy rope, stretched it out fully along the quay and marked the halfway point. Young boys wearing swim trunks lined the water side of the pier, and young men wearing jeans and sneakers skulked around with umbrellas, jackets, and fabric draped over a broom handle or dowel. 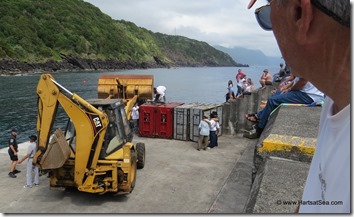 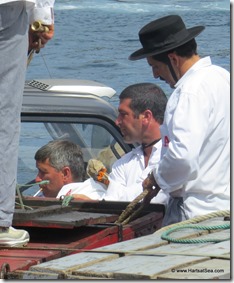 One of the farm trucks pulled an open animal trailer with metal banisters onto the quay and unhitched it next to the stone wall away from the water. It’s use became apparent to us shortly after the start of the event. In the meantime, the bull handlers from the first farm changed into gray pants, white shirts, and distinctive black hats. Some of the handlers reached into the trapdoor of the bull crate, attached covers over the bull’s horns, tied the rope to the bull, and somehow snaked it under the door of the crate without getting injured. 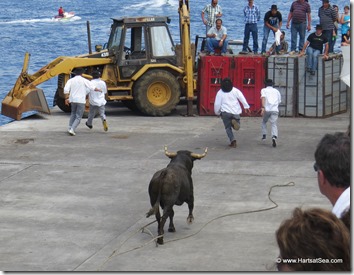 We jumped when a rocket resounded with one BANG! The older gentleman to my right smiled and said, “The bull is out.,” The bull was out and he was ready to rumble.  For the next 10 to 15 minutes until he was sufficiently tired, he was teased and by young men wielding flapping fabric or open umbrellas, shouting derisive phrases, and moving to entice a charge. He charged; occasionally knocking someone over. 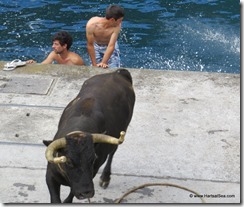 More often, the young boys jumped off the pier into the water, while the young men ran for the parked trailer -- the only dry safe zone along the length of the pier. The bull’s movements were somewhat controlled by the ten line handlers, five on each end of the line, but if the bull charged the handlers, they, too ran for the trailer, or the safe zone behind the traveling bull sheds. On the shore end of the quay were perhaps 100 thrill seekers, mostly men, who taunted the bull and prepared to run into the “safe zone” beyond the supposed length of the line. It’s easy to see that the bull could sometimes pull free and the “safe zone” would then not be fully safe. An ambulance sat nearby. 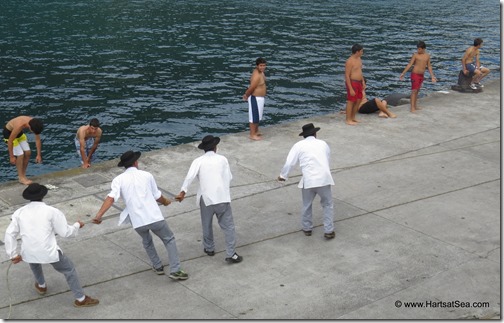 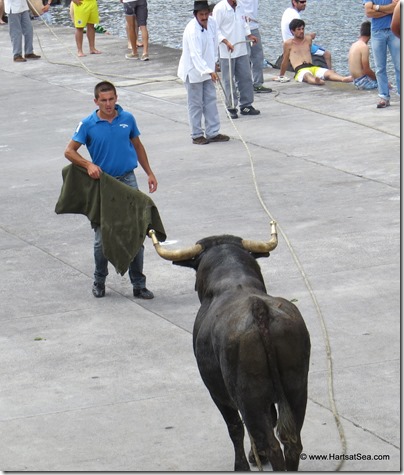 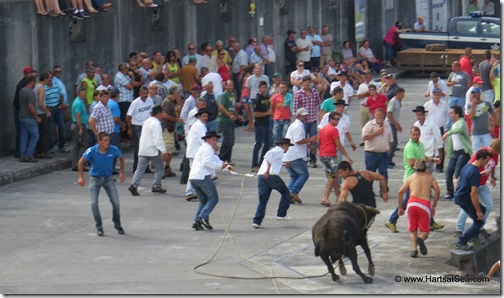 While a few parts of the Azores do have regular bull fights, with toreadors on horseback who must stab the bull with a type of javeline, most of the islands only offer Touradas a Corda. The bull is certainly not happy, and is taunted before leaving the traveling shed so that he comes out looking to inflict harm. I assume the bull could be seriously injured, but saw more evidence of bulls getting tired and folks getting bruised. People have certainly been seriously injured and even killed at these events. We watched sitting and standing along the wall high above the bulls. The event  was fascinating -- by turns funny and scary -- and the young men who challenged the bull worked to perform for the crowd, twisting and turning, and creating a “dance” of man and animal.

When the chief handler determines that the bull needs to rest (and is more tractable) the line is gradually shortened and the bull is herded or pulled back into the traveling shed. Once he’s safe inside another rocket is sent up -- a double one. “BANG! BANG!” means the bull is in. There is a brief intermission to allow viewers to obtain snacks, beer, or soda while another bull is prepared, then it begins again.

So we watched and learned and talked with our viewing neighbors -- and discovered that many were folks who had emigrated to the US or Canada from the Azores and returned home for vacation. Consequently, we could chat with them, learn about the islands, and be delighted to find out they were from Massachusetts, near our home in Maine; or Toronto, near where EW grew up; or California, very near where our son Mo lives in Santa Cruz.

And that brings us to Leo from Watsonville, California. Next time.