Home Archives Profile Subscribe
Sunday with the Car in Sao Jorge … and Leo
What Do the Azores and New Bedford Massachusetts Have in Common (Besides Whaling)?

Monday On a Hike in Sao Jorge 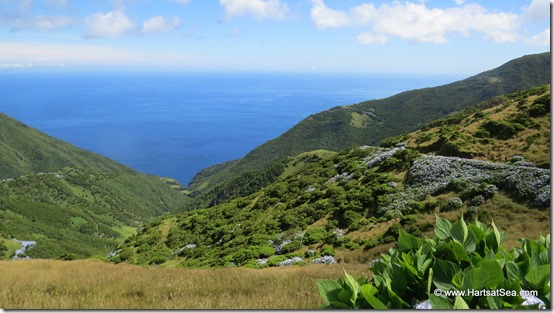 We were delighted with the island of Sao Jorge from the very first day when we’d anchored under the cliffs of Velas. We were thrilled with the call of the Cory's Shearwaters who nested in the cliffs. We were impressed with Jose, the harbor master, and we found the town charming – particularly the dragon statue in the praza. 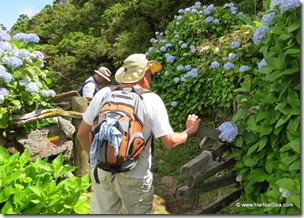 Nothing prepared us for the glorious Numero Um hike one Monday on Sao Jorge with Leo.  We three walked, talked almost non-stop, laughed, and took hundreds and hundreds of photos. The hike begins at the wind farm at Serra do Topo  on a wide path or farm trail,  and goes from mountain pasture to mountain pasture, bordered by stone walls and hedges of the beautiful hydrangeas, and separated by charming rustic gates. Leo told us stories of growing up on Sao Jorge, visiting his relatives who lived on a small faja that we would cross that day, and enlightened us on some of the things we saw along the way.

The perfection of the day was marred only when the sole began to detach from my hiking shoe. I tied it off, first with my bandana, and later with a spare shoe lace gifted to me by a German hiker. It worked just fine, but EW and I laughed to remember when the sandal of one of the cruiser/hikers sandal blew out at the top of the Death March in Grenada. At first we tied it off with a piece of rope for what would have been an uncomfortable hike. Fortunately, when Bill and Joann from S/V Ultra caught up with us, he was able to proffer not an extra shoe lace but an extra pair of hiking sandals that fit! Such is the charmed life of cruising sailors. 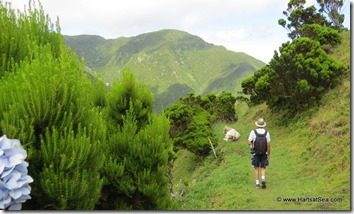 But I digress. The bandana and shoe lace worked just fine We were slowed only by stopping to take photos, and did so often enough that we took much longer than Leo had intended to reach the Faja da Caldeira de Santo Christo. I was hungry, and had packed plenty to share with Leo – but remember, we’d only met the day before and hadn’t really discussed logistics other than transportation. Leo didn’t want to presume to eat our lunch, and hadn’t had anything on hand suitable for a hiking snack. We had reached a small bridge over a mountain brook when I decided to lay out our repast of Sao Jorge bread, cheese, and fruit. Leo turned from taking yet another photo to say, “Oh! I thought we’d wait to eat.” “Really? I guess I could wait a bit.” He assured me he had a place in mind and I (mostly) good naturedly repacked our repast and followed him and EW down the trail. 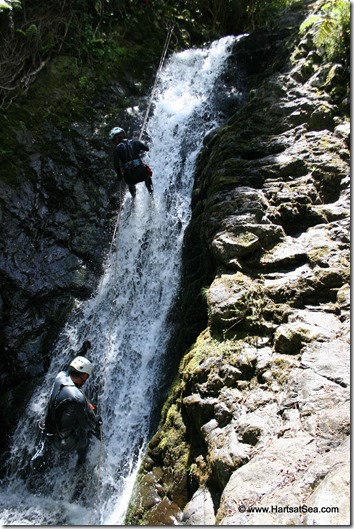 First we detoured to the waterfall and watched two local guides rig lines and rappelled down the falls. Then we continued toward what I hoped was a lunch break, stopping to fill our water bottles at a spigot fed by a clear mountain spring. I was charmed to see plastic piping peeking through the foliage, carrying water down the hillside to a home above the faja. Life is simple in this part of Sao Jorge. 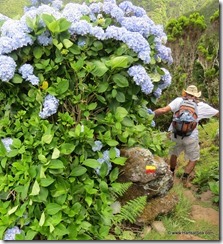 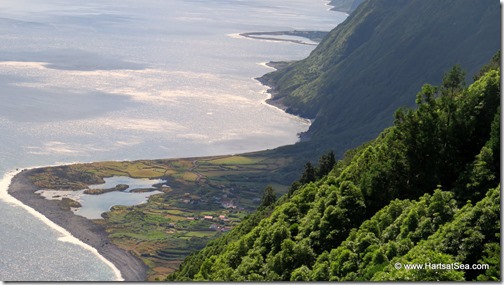 A faja is a land area at the foot of cliffs and just above the sea. At right, Faja dos Cubres is the closer one. In the distance you can see Faja da Calderia da Santo Cristo.

This photo was taken at a lookout on the road down to Faja dos Cubres. There is no road to the fajas in the distance.

Most fajas are the product of landslides, but  Faja du Ovidour, which EW and I had visited on Sunday was made from flowing  lava.Generally fajas have very fertile soil, and if it were possible for people to traverse down the cliffs to the fajas they built homes of stone, surrounded by stone fences and corrals, grew crops, raised cattle, constructed churches, and created small communities accessible by steep, twisting cliff side roads.

Our hike took us down the mountains, among old volcanic craters, now flowing with hydrangeas, through the pastures and the woods to the sea and Faja da Caldeira de Santo Christo. This faja has never been accessible by car, yet at one point the population sustained a small Catholic church. Even today, those who visit or who live there leave their vehicles in a lot at Faja dos Cubres and walk along a trail just above the water. Between these two towns perched on rocks just above the sea, are two more smaller fajas, each with four or five homes. In recent years, the trail has been maintained and widened so that four-wheelers are able to travel along it. Supplies for those who live there, for the guest houses and for the restaurant arrive via these trail riders or by boat. 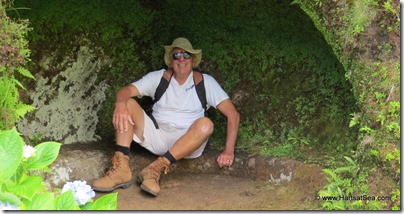 The hike down from the mountain was fun and Leo was charming, but I was getting peckish and complained that he was letting me starve. Finally he told me he’d  planned to dine in little restaurant in this remote faja, where he (of course) knew the owners. There we found other hikers, local tourists, and surfers who were staying in one of the small local guest houses. The restaurant offered good Azorean meals with American style French fries or batatas as a side – and a view of the “lake” a natural lagoon where a few tourists swam and tried out paddle boards for the first time. After lunch we explored the faja and then began the final part of our walk, along that path above the sea to Faja dos Cubres

Leo’s aunt and uncle used to live in a stone house in one of the small fajas we passed.. In the winter, it was very difficult to get supplies, and his aunt told Leo she was glad to live so close to the sea so she could take her bamboo fishing pole out to the rocks just off her house and catch dinner. When he was a young boy, Leo spent a few summers with them. Later, someone else bought the property and still later it was destroyed by a landfall. There have been landslides and earthquakes in the Azores and we’ve seen many properties that have not been repaired. It was humbling to watch Leo point out the yard and home he once knew. There is no roof and the floor has fallen in. A tree grows inside the walls. Still, a neighbor’s cow grazes between the cliffs and the shore. 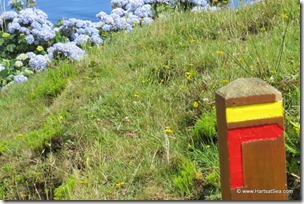 A note about the photos: I took over 600 photos that day and EW and I really enjoyed them, but somehow the disc was compromised. A young man in Velas recovered the photos you see here, but I’m missing so many – from my tied up sandal to Leo walking into the ruins of his aunt and uncle’s home.

Leo gave me the photo of the guides at the waterfall.

And that photo of EW in the cave? That’s mine, Leo told us that these caves were hollowed out by farmers so they would have some shelter when they were tending their cattle during the rainy days of an Azorean winter. Some of these little shelters had stone shelves carved in to store their lunches.