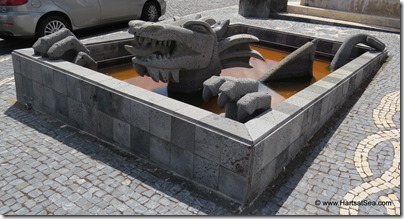 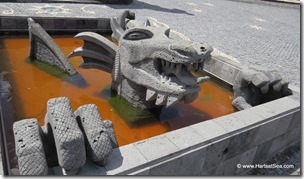 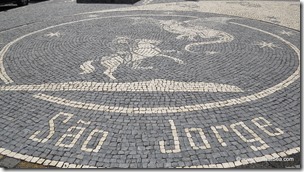 Summer is the dry season in the Azores, but our week in Sao Jorge was mostly cloudy with showers. On our first day ashore, EW and I wandered the town, which slopes up from the sea on a grade that increases every couple of blocks. The village square of Velas (pronounced Vay-lish) honors both Sao Jorge, who slayed the dragon, and the Barefoot Boy who emigrated to America to return years later, no longer barefoot,  to donate needed funds to worthy causes. (I didn’t take a photo of the Barefoot Boy’s statue. Sorry.)

The long narrow island of Sao Jorge, with its ridge of mountains and hills, has been compared to a dragon when viewed from the sea, So St. George is a fitting name and patron saint. As we were to discover, it is also fitting to honor those who emigrated to the US and made good; their numbers are legion and they greatly help the local economy.

After a few hours walking up one street, down another, and talking with ladies in the tourist offices, we were a bit parched, so EW suggested we duck into a corner bar for refreshment. There we met Vasco (pronounced Vash-co), a middle-aged gentleman from mainland Portugal who had moved to the island and opened a bar. (Sounds a bit like St. Thomas, doesn’t it?) Vasco’s English was better than our Portuguese and we easily ordered a beer for EW and a white wine for me. We had a second round when Vasco, who does not sell food in his bar, offered us a sampling of the 7 month aged Sao Jorge cheese. Sharp, yet slightly creamy. Delicious. We sipped and ate, talked a bit with Vasco and watched when, at the request of local customers, he twice pulled a small empty green bottle from beneath the counter and filled it with a clear liquid from a larger bottle that was also kept out of sight. EW immediately said to me, “That’s moonshine.”

When the second customer had left with little green bottle in hand, we asked Vasco what they’d purchased. “Aguardente.” This is a drink local to the Azores which is made by some for licensed distribution. Others make their own for friends and family, which is what Vasco had under the counter, and he kindly offered each of us a shot. Oh my. It was moonshine, but palatable moonshine - and that’s a problem. We talked about how it was made (a number of different kinds of fruits can be used, depending on the chef or vintner), its taste, and its potency. The name, of course, means “Water with a bite”. That gives you an idea of the potency. Oh My. 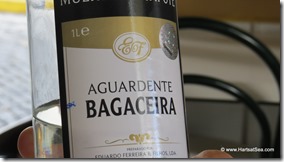 Of course the commercial aguardente was discussed, a labeled bottle was produced and two more shot glasses filled. It would have been impolite not to imbibe, but we both liked the home brewed stuff better. When we left, we bought a bottle.  (When in Rome, right? If you were Portuguese, here’s where you would say, “Pois. Pois,” which means “ Of course. Of course,” and is pronounced “Pu-ish.Pu-ish.”)

We tootled out to the anchorage with happy minds and hearts already in love with Sao Jorge. EW went below to open up the boat while I locked the dinghy just as our Belgian neighbors were returning from their drizzly day touring the island. I enthusiastically waved them alongside and invited them for drinks and snacks. They accepted with pleasure, going first to their boat for dry clothes.

I made snacks, EW got out the glasses, and we prepared for the first guests we’d had at anchor in over a month. Patrick and Patricia were returning home after two years of cruising in the Caribbean (somehow we’d missed them there) and Patrick's son Loic was visiting for part of their cruise in the Azores. As Loic said, “I only join them on the easy parts.” They were delightful: we laughed, Loic and EW played guitar, we made bad jokes about a few suggestive clouds, drank a little of wine and beer, ate, and told each other about our day and our cruise. 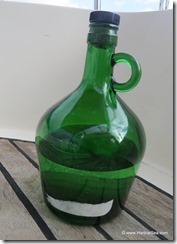 EW eventually brought out our little green bottle of Aguardente and all had a shot. Pois, pois. If you’re counting, you will realize this makes three shots of water with a bite for EW and me. The next day was also overcast, so EW and I used that as an excuse to have had a quiet day on the boat. That evening Patricia invited us to have drinks and a tour of Rih Malti. I drank water. The kind that doesn’t have a bite. 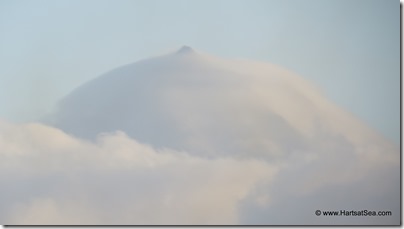 This is a cloud covering all but the tip of Mt. Pico on the island of Pico about 25 miles from Sao Jorge. We all thought it looked like ice cream. Really.