Home Archives Profile Subscribe
If I Had a Boat, I'd Go Out On the Ocean. If I Had a Pony ...
The Sounds of the Azores

Signs of the Azores

EW and I are amused by small things. In Faial, I neglected to take a photo of a powerboat berthed near us. The name, It’s Fay-Al was obviously intended to help visiting sailors pronounce the name of the island. The Portuguese people here have a sense of humor and like clarity.

We've noticed that while all other signs are in Portuguese, every stop sign is an octagonal red sign with with familiar letters: STOP. Victor, the co-owner of Patio Stables said that STOP signs can be found all over Europe. Some friendly guys from the mainland told us that they have created an acronym that uses Portuguese words meaning something along the lines of don’t move if you have eyes. (Rough translation is that if you can see, stop the car.)

Exit signs are unambiguous and found above every door and some floor to ceiling windows in public spaces. 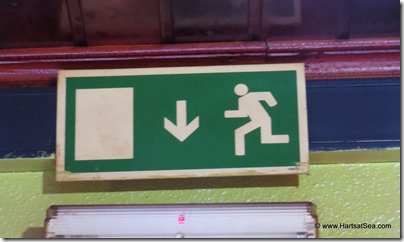 This one is also a no-brainer:

Even some of those whose first language is Portuguese find this sign to be humorous. 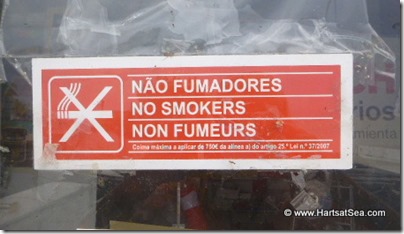 Think about it. If you enjoyed your  last cigarette four hours ago, can you shop here? 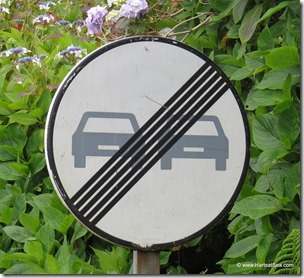 These signs confused EW and me when we were driving around the island.

That diagonal slash usually means “NO” making this a “No Passing” sign.  However, these signs were posted after curves, on what passes for a straightway here on Sao Jorge. 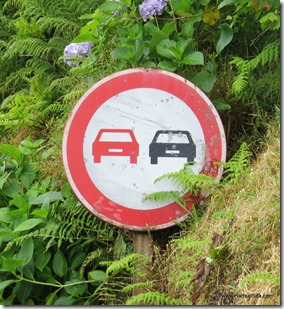 We figured that the diagonal slashes were “Pass With Caution” and the red car signs were “No Passing”, simply because you’d have to be an idiot to pass where those signs were posted. We got confirmation of that the next day with our new friend Leo. (More about Leo in subsequent posts – lots of subsequent posts.)

(After reading the linked article about European road signs. we learned that the slashed sign actually means "The end of No Passing". Still find that a bit confusing, but as you'll see below, "The end of ... " is a common sign.)

Growing up in Maine, I was used to vertical signposts at the town borders announcing “Entering Newport” or “Leaving Newport”.Here on Sao Jorge, they are much more succinct. When we entered Norte Grande, we were greeted by this lovely tableau. 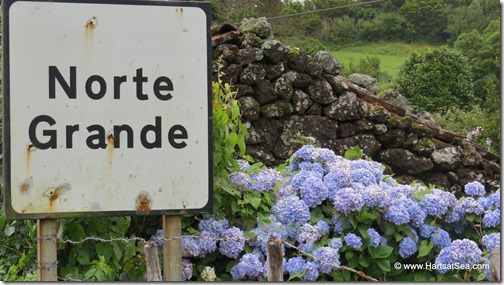 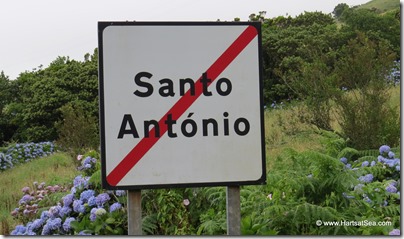 We left Norte Grande with a laugh, but missed the photo. EW made sure he was able to stop as we left Santo Antonio.

I started the hunt for signs, but EW won the prize. We were enjoying a cold beverage one afternoon at a dockside bar. After a trip to the men’s room, EW asked for the camera. This sign needs no translation. 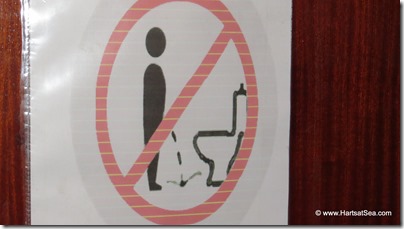