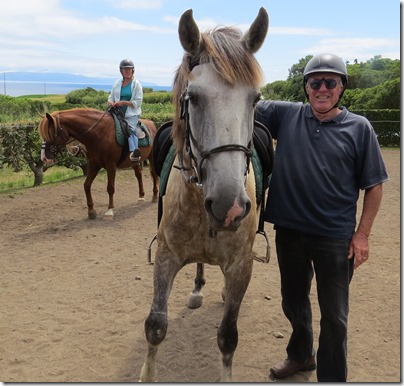 With all due respect to Lyle Lovett.

We didn’t ride our ponies on our boat, but we did ride Lusitanos on Faial. Unlike the Caribbean, though some islands have bus systems, none appear to run outside the major towns. For example, in Faial you can ride a bus through the city streets and out to the hospital and that’s it. Some of the best sights on each island are in the interior, and one must either take a taxi or rent a car. We’re on a budget, so choices have to be made. We could rent a car and see the two apparently amazing volcanic craters, or we could go for a horseback ride and enjoy a typical Azorean lunch at a country home. We figured that other islands would have craters, so we opted to ride.

There are family members reading this who are stunned. I don’t know nothin’ about riding no horses and they know it. So did the horse. EW has had slightly more experience than I, but not in the past 30 plus years.

Still, we decided to treat ourselves to something different and this seemed to be a good idea. After we had made the appointment, Barbara from Great Britain said that she had tried to go for a ride two years prior, but had backed out when she saw the stable and horses. Barbara is a real horsewoman, who could ride her pony on her boat, and she thought that stable did not treat the horses well, so declined to ride. We went up to the tourism office and talked with a helpful but non-committal clerk who did tell us that this outfit, “Patio Trekkiing a Cavalo”. was new, and that they had started their business after the other stable had closed. We decided to go for it, and if we were concerned about the animals and business, we would also decline to participate or pay.

Lisa, a young German horse-woman picked us up at the Marina. She was delightful and told us that she had taken this job after graduating from university, and would return to Germany in the fall to start her career. In the meantime, she was learning Azorean Portuguese, riding every day, caring for the horses, and guiding German and English speaking tourists. The majority of their riders fly in and stay at a nearby guest house for a week, taking 25 and 30 kilometer rides every day and eating dinner at the farmhouse owned by the stables. We day trippers were extra income. EW and I were the only ones that Sunday. 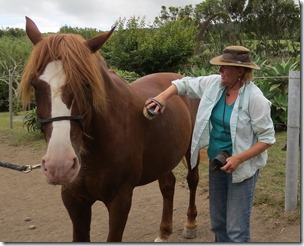 Lisa asked a number of questions to determine our experience. I told her to consider me totally inept. I hadn’t ridden since riding Charlotte Gray’s ponies in Corinna when I was in fourth grade. It had been a long time. She gave me the most handsome boy horse ever,Trevo, which is short for “four leaf clover”, meaning it is the lucky person who rides Trevo. He is ridden without a bit because he is just such a good horse.(With one minor exception.) Essentially Trevo has the personality of an outstanding black lab: food, love, and attention are his three fondest things. Prior to leaving the boat, EW and I had armed ourselves with carrots and Trevo likes carrots. Trevo also likes bamboo leaves, but that’ getting ahead of the story. 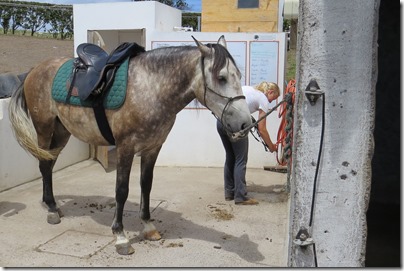 While EW and I may not be outstanding/experienced/any kind of horse people. We know horse people and have been in well-managed stables. These horses are kept outdoors in numerous fields, always with at least one or two other horses, because they are sociable animals. They were well fed, clean, and eager to go on a jaunt. The stable owns eleven horses, and we saw six. All were lovely, well fed, had ample water, and friendly. The stable and tack were clean and kept that way. Caring for the horses came first, caring for the tack second, and we were third on the list – as it should be.

We helped Lisa bring “our”  horses from the paddock to the stable area, then were given two grooming brushes and told to groom them so nothing would chafe under the saddle and gear. Lisa checked their hooves and our grooming, and saddled the horses with saddles she said had been designed for military horses. She said the saddles were comfortable for the riders, and – clearly most important to her – were comfortable for the horses. The day was billed as a 90 minute ride through the Faial countryside on trails, farm tracks, and the occasional paved road. Following that, we would have lunch al fresco back at the farmhouse. There are few no photos taken of the ride, as I was paying attention to Trevo. He is a terrific horse and I fell for him (remember, he’s like a Labrador retriever, of course I fell for him).

It’s a beautiful island. We were on the eastern shore, where we 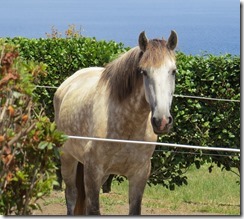 could see cattle, corn fields, quaint farm houses, and the Atlantic ocean. Lisa said that when she has led groups out along the bluff they sometimes see whales spouting offshore. There is no more beautiful place to ride a horse. The lovely mare EW rode was at first upset her girlfriend was left back in the field, so EW and she had to come to an understanding. He handled her and praised her and did so well that after the ride, she transferred her affections to EW and gazed adoringly at him while we ate our lunch. Evidently she’s a fickle filly. My sweet boy really liked to pick bamboo leaves and have a snack while we walked down the farm tracks. They aren’t bad for him, but he was supposed to be paying attention and not dining. I started keeping score of when I could “head him off at the pass” before he got his teeth on a choice leaf. I lost 14 times in the 90 minutes. I think I probably only won 10 times. Most of my losses occurred when we were going downhill or along a group of loose stones. I wanted to “give him his head” so he’d maintain his footing. After all, he knew much more about the terrain and how his feet worked than I did. He caught on fairly quickly that those moments were the best for grabbing a wayside snack. It was all in good-natured fun and neither of us got in trouble with Lisa .

Back at the stables, we met Victor, who owns the business with his wife Anja, who was on vacation with their son. Victor had retrieved the week’s guests at the airport. Now he was able to join us for lunch and a chat.

He is an economist who traveled all over Europe in his career, and who wanted to live a quieter life. They moved to their vacation home, renovated it to provide for public and private rooms, and turned a passion for riding and horses into a lifestyle and income. Three of the horses, including my best boy, had been their own animals and had moved to the island on a cargo ship; a six-day trip the horses and Victor endured. After a wonderful lunch including wine, cheeses, meats, bread, and melon – all from the Azores – Victor drove us back to the marina, making sure to take a different route, with a couple of stops along the way.

It was a wonderful day. We were a bit lame on Monday, and my sit-upon was particularly indignant. We aren’t going to start a new life on shore with horses. In fact, I’ll continue to quote (misquote) Lyle Lovett’s song: 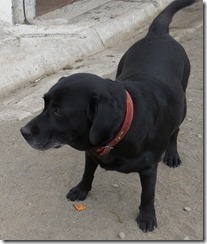 Every good stable has a good dog. This is Nina. She joined us on the first part of the ride, then went back to relax in the shade and wait for lunch. Smart dog. 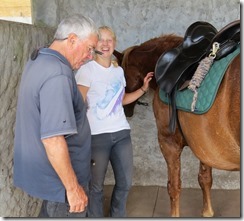 EW and Lisa, after the ride. There is a farrier on the island, who uses “cold” horse shoes. Lisa says it’s better for the horses. 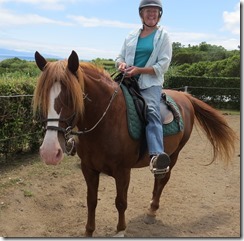 See, I really did ride a horse. We went forward, we stopped, we backed up. Lisa and EW’s horse. She’s new to the stables and Lisa doesn’t like the cut of her mane, saying it doesn’t protect her eyes from flies. 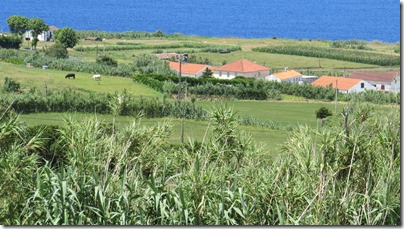 The countryside of Faial. Tough to take. 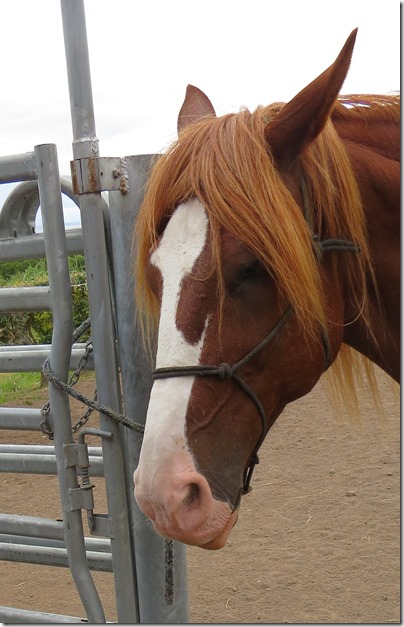 One last shot of my boy.  Lisa said he is equally good with experienced riders who want to gallop. Probably doesn’t get as many bamboo leaves with them.

If you go to the Azores, the company can be found at www.patio.pt – and their brochures are prominent in many tourist locales.

I can image that was a fun day. we rode horses in st lucia, where the horses are much smaller than american horses. it was a memorable day. its great to hear the fun things you are getting to experience now. cheers!