We Pause in the Crossing of the Atlantic 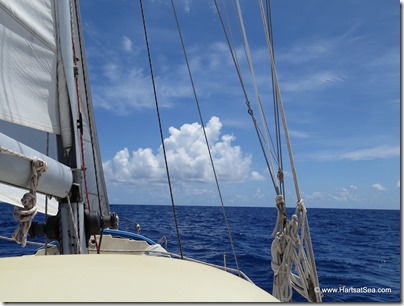 Breathe.  (I put that in for Gabi – who is here! Loyal and long-time readers may remember the yoga lessons we took our first year in Grenada. Near the end of that season, Gabi and her husband Sven sold their mono-hull, JuCa, and flew back to New Zealand. They and their two children, arrived back in the Caribbean about two weeks ago, having purchased a catamaran, Cool Change, and will head back to Grenada when the boat and provisions are ready. It was terrific to see Gabi and she mentioned how much she loves “seeing” me “Breathe” in various blog posts.)

Breathe. Hand-steering for three days totally reinforced our decision to return to Sint Maarten.  Sometimes you just get it right. An engine/fuel filter/solenoid problem also raised its ugly head before we made it to Simpson Bay, so this week is a week of boat mess and repairs. 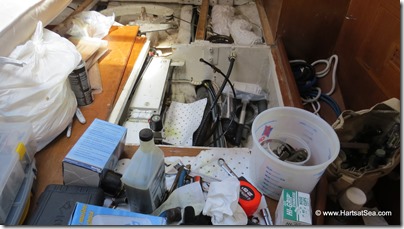 (Below, is the master stateroom. Clearly we are not sleeping there.) Fortunately, we had met Brad and Shana from S/V Quartette right before we left here. In fact both couples expressed regret that we wouldn’t have more time together. On the one hand: Be careful what you wish for. On the other hand: Brad is a diesel mechanic – a really, really good diesel mechanic. We anchored near them upon our return and Brad spent the better part of two days aboard La Luna working and directing EW. EW has a high regard for Brad’s knowledge. We are very fortunate. I have a list of things to accomplish, about half of which are on board. None of those can be done while EW and Brad are in repair mode. The engine/fuel/solenoid problem is fixed and the engine has been thoroughly examined. EW is changing out some hoses that are tied in to both the engine and the engine driven fridge compressor, at which point “Pinetop” Perkins will be good to go.

While Shana and I were shopping for boat parts and a few groceries, the guys tackled the autopilot. We met them underway in dinghies as they were taking the hydraulic pump into FKG. We had hoped for hose issues, so when I saw large metal parts in garbage bags my heart sunk. This auto pilot was top of the line over 20 years ago, but the Australian company is no longer in business, having been absorbed by someone else. Shana and I headed back to the anchorage while the guys took the part to have the seals rebuilt (or whatever that is called) – if possible.

FKG is an outstanding company. EW says it’s one of the best marine companies he has ever experienced – and that’s a lot of experience to consider. The guy took a look at it and said, “Yep. We have to parts kit for this.” It will be ready at 11:30 on Friday.

We are planning a Saturday or Sunday departure – depending on when I can get my stuff done. Of course there will be some re-provisioning as we’ve had two weeks of using food and water and gotten no-where. For those of you concerned that we are leaving too late – as I had been. I’ve talked with a number of sailors who make this trip frequently.  As one charming Italian fellow said, “Oh. Is good time. All June is good time.”. He is planning on leaving in 5 days because it will take that long to get his boat ready. Mike, our friend/mentor on Quinn will head out about when we do. His boat is smaller and slower than ours so we won’t see him until we all get to Horta.

Our friends from Maine on Koukla are still in Bermuda, waiting for the weather to clear. They had left a week ahead of us and run into no wind about 400 miles north of Sint Maarten. They motored a lot, finally making it to Bermuda between a Low and a Cold Front. Once the front passes they will make for Rockland.

So, here are some things I learned during my longest passage at sea (thus far).

That’s about it. Thank you all for the messages via Sailmail. I love Sailmail. We’ll let you know when we set off again. Life is very good here in Sint Maarten, but we are sure it will be just as good in the Azores and look forward to experienced them.

For those of you wondering about our travel “schedule” I include the following notes about our itinerary. Since we are about three weeks late in getting out of here, we have tentatively shortened our goals for Portugal, and after hearing from other cruisers about the costs charged sailors in Senegal, we have omitted that country. This is a rough outline. If you plan to visit, know that you will be picking a date or a location, not both. We cannot guarantee to be someplace on a particular date.

This actually gives us 4 extra weeks, some of which will be spent in the Cape Verdes preparing to leave for Brazil. We hope to do that by the end of  December. We could certainly spend more time in the Azores, Portugal/Spain, and Canaries, if the boat and we are doing well. I expect we will take our time sailing from Recife, Brazil down to Uruguay and Argentina, and would arrive in that region around April. We have to take Tango lessons and do some exploring via bus in South America, so we have not put a time-frame on leaving there.  Sailing and adventurous types are invited to visit aboard. Others may want to stay ashore where we are based for a bit.

We are relaxing a bit – and EW participated in an open mike night. More on that later. In the meantime, he thoroughly enjoyed reading Captain Corelli’s Mandolin. He didn’t enjoy my interruptions with the camera. 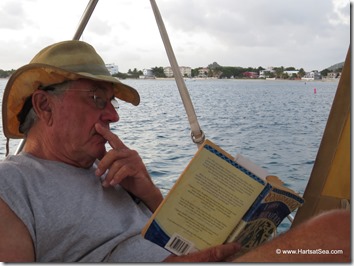 I leave you with how EW expressed displeasure. Good day! 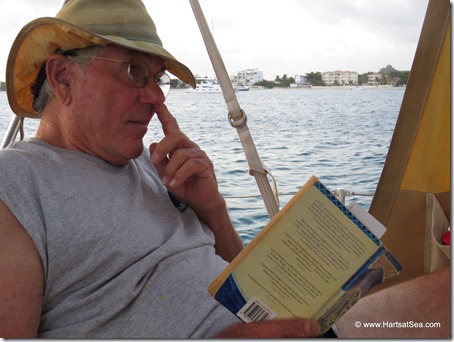 Given that last photo, Ross says he's going to be sure never to borrow Stew's guitar! Love you guys!

You guys are awesome. What an amazing team. Believing for safe travels for you. P.S. I don't have your snailmail address, can you email it to me please. darleennajera@yahoo.com or facebook msg it to me. LOve you Darleen

That is too funny, Diana. Trust Ross to crack me up from half way around the world. Hugs!