Home Archives Profile Subscribe
Pizza
We Are Really At Sea

Blood on the Vinyl and Other Tales

Some boats have left for the Azores, while we and others weren’t ready or didn’t like the weather window. The “Jackrabbits” who left last week are complaining that there is no wind. Some have run their engines to the point that they’ll have to go into Bermuda to get (very expensive) diesel.Some were caught in storms with 35 to 40 knots of wind. We hope to avoid both of those scenarios.

There have been highs and lows out there meeting up and that is never a good thing. The result is that weather guru Chris Parker suggested last week that we hold here for a bit. (I really regret falling asleep during his on-line course a few years ago. EW says he understands grib files. Oh god, I hope so.)

S/V Kookaburra showed up on Sunday morning!  It was so great to see Jaime and Keith again, though the new good-byes will be even more bittersweet. 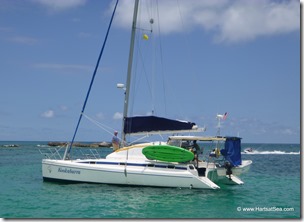 For the first time since moving aboard I have clogged the head. I am dealing with it. It was not a good day. You do not want a photo. <Shudder>

Here are more palatable bits about the past few weeks.

Right now, it looks like we’ll be here until the 24th.  In the meantime, EW will get better at reading weather files; I’ll cook and freeze more meals, clean more and  write more; and we’ll both contact friends and family before we go. Last night we met up with other Grenada cruisers and were introduced to a couple who are also planning on heading off for the Azores soon. We’ll touch base with them and talk weather, buddy boating, weather, and departure dates. Their boat is called Wanda. That’s right, when we call them on the VHF we say, “Wanda, Wanda, Wanda”. You know I want to continue with “Wanda WHO! Who wrote the book of love?”

Thanks for the kind word about Nimble Navigator. http://nimblenavigator.com/