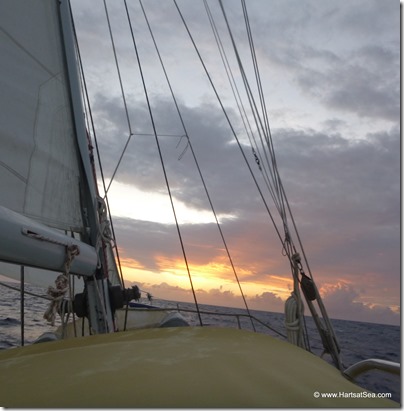 We finally left the Virgin Islands after wearing out our welcome with dear friends on S/V Kookaburra and S/V Two Much Fun. I understand how they felt – how many times can you say goodbye? On one of our last days, Jaime wore a shirt she had been gifted by one of the power yachts she had serviced. The ship is M/V Go, so the shirt simply has the word “Go” on the front.

We were determined to get underway, but not quite ready for the Anagoda passage, so we tacked to St. John in an easterly breeze and picked up a national park mooring. We had a lovely, relaxing Sunday evening and Monday, before setting sail to Sint Maarten on Monday evening.

We should have left sooner. It’s always a crapshoot. Is the weather prediction spot on? Or off by a few knots or a few degrees? Will we be tacking all the way Philipsburg, or will we get a favorable breeze and a straight shot? It mattered because we’ve agreed not to enter unknown harbors in the dark and we had never entered Philipsburg.

I hate one or two nighters – those short over-night hops that don’t let you get into a sleep/wake rhythm. I took the second night watch from midnight to 6 AM,  and didn’t sleep at all from 6 PM to midnight, so I pulled an all-nighter. It didn’t kill me.

We started along a tacking pattern I’d established. Ten miles south of the rum line, turn, ten miles north of the rum line. Any more than ten miles put us too far off course in a wind change. Any less was a pain in the butt. Of course, the wind shifted. One southeasterly tack became more south or even southwest and our actual next tack point was miles to the west of the planned point, closer to our last southern tack point than to the one we wanted.  Twelve hours later, the wind shifted again, and we began heading more easterly than north or south. Sailing is like that.

Thinking about it while tired, I decided that sailing to windward is like that old board game Chutes and Ladders.

Did you play it? Mom played it with me and I played it with nieces and nephews and kids I babysat. (Daddy did not play Chutes and Ladders and started teaching me Cribbage when I was 7 or so.)

When playing Chutes and Ladders, you start at the southwest corner (or lower left corner) of the game board and work your way north and east (or up to the right) to the northeast corner (or upper right finish line).

For this trip, I plotted a course with tacks and we worked to make good from mostly west to east, tacking northeast and southeast along the way. 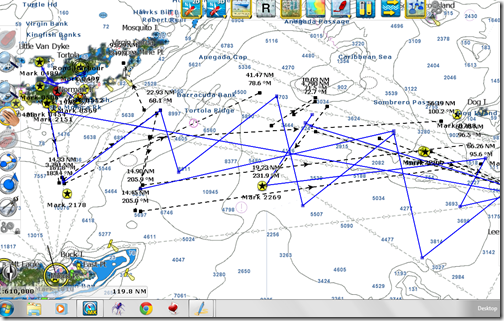 So you roll your dice (or plan your route) and you move forward the required number of spaces. If you land on a ladder, you “climb” up it to a space closer to the winning corner.

We sailed, to the southeast, and  then northeast – hopefully getting closer to Sint Maartin. Sometimes, we caught a favorable breeze and were “lifted” (that’s a sailing term) up the ladder closer to our goal.

In Chutes and Ladders, you can also land on a chute or slide, that will send you right back down one or more levels closer to the starting line.

We sailed, and tacked, and sometimes ended up sailing back closer to our prior tack point than we wanted to.

Four people can play Chutes and Ladders at once, and someone will be the first to the top and win the game.

We weren’t racing, so we were going to win, because all we had to do was make it to Sint Maarten. Which we did – at 9:00 PM. 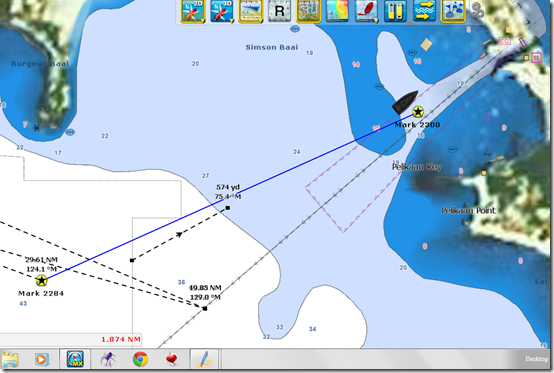 That’s after dark, and we had a choice: 1. hover at sea until daylight; or 2. enter Simpson Bay in the dark, anchor, get some sleep, and sail to Philipsburg in the morning.

Simpson Bay has a wide opening with no obstructions except for Pelican Key. There is a marked channel (not shown accurately on this chart) and would be a whole lot of boats at anchor in the safe anchor zone to the right of the channel. If it was too crowded, we could opt to anchor in slightly deeper water to the left of the channel.  EW had to rely on my memory of Simpson Bay, but agreed to try anchoring there in the dark.

It was perfect. I marked our turn into the bay, marked where I thought we’d anchor and took her slowly in under power with EW on the foredeck. We slipped between a large blue yacht and a large catamaran, pulled ahead into the wind, dropped the hook, and waited for her to grab.

There were definitely more chutes than ladders on this sail, but we won the game. Safely anchored in Sint Maarten.

NOTE: The photo at the top was taken at the 6:00 AM change of watch.