Finally! t was the first morning of my first day of school. I was nearly 7 years old, and we lived in northern Maine in a very small town which didn’t offer kindergarten, so I’d had to wait until first grade. And since my birthday missed the cut-off by three days, I was going to be one of the oldest kids in the class. I had been excited for weeks finding it difficult to think of anything else, and having trouble getting to sleep each night. I was dressed in my new blue plaid skirt and a white shirt, and sat at the table waiting for my breakfast, no doubt talking a mile a minute to my mom. She handed me a glass of juice and a vitamin pill, which I inhaled – literally. As I began to choke, gasping for air, Mom hauled me upside down and slapped me on the back until the pill popped out. (Yes, I predate the Heimlich Maneuver.)

Obviously, I survived, and I really, really liked school, but I’ve always found it difficult to turn off my mind when facing major change. 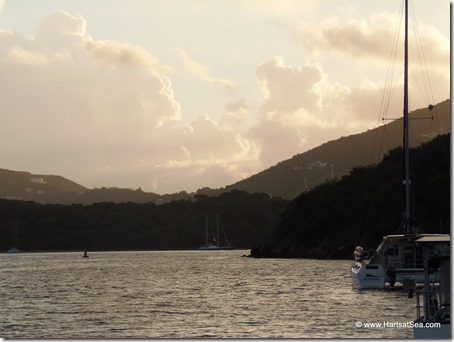 One Morning in February 2014

Fast forward more than 50 years. It’s nearly midnight and I can’t sleep. Just over a year ago EW and I made a tough choice when we agreed that neither the boat nor the cruising kitty was ready for an Atlantic Crossing. We stayed in St. Thomas and worked, becoming Live-Aboards instead of Cruising Sailors: we purchased a mooring, took jobs, stopped cruising, commuted by dinghy, and became known by store keepers, security guards, and wait staff. (You know a cruising sailor has stayed in port too long when…fill in the blank.)

This week, we both “retire” again, and in May we will cross the Atlantic to the Azores.

In the meantime, I can’t sleep. I’m not worried about the crossing. I’m thinking about everything that must be accomplished prior to the crossing. I’m thinking about writing magazine articles and blog posts. I’m worried about anything that would be able to stop us this time. So far, I’ve successfully swallowed my daily vitamins, but some nights it’s just too difficult to turn off my brain and fall asleep. 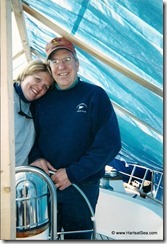 Tonight, curled on EW’s shoulder, his arms around me in sleep, I thought 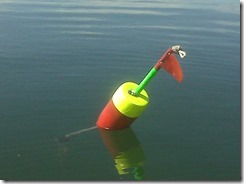 about tomorrow’s To Do list, my strange last day at the Rum Cart, our trip to Florida earlier this month, all the things not yet posted on the blog, and some of  the things that could prevent us from making this incredible journey. Since no-one was available to read me story after story until I fell asleep, I tried the method that had worked many nights in 2002 when we sold the house and moved aboard, and again in 2010 during the last weeks before we left Maine: Counting backward from 11,000.

and make myself concentrate and “say” every numeral in my mind …. I can fall asleep.

The photo above left: EW and me after purchasing La Luna; above right: a lobster buoy near our Harpswell mooring the summer before we left Maine.