Our neighbors towards the sea – where La Luna was heading.

Throughout our experience with La Luna we’ve been impressed with her timing. Maybe it’s because she’s middle-aged and has learned a few things since 1985, or maybe it’s because she’s an ocean cruiser who had been confined to coastal cruising for many years, and just wants to extend our journey. Probably we are being fanciful, but both EW and I believe that La Luna has excellent timing.

Usually this has been experienced in terms of “At least it happened here.” Whatever “it” was – when things have failed on board, they have done so – almost exclusively – in the best possible location for repair, safety, and assistance. If La Luna  wrote a blog, she’d not say the same about us. Human error has put her in peril more that boat failure. Sorry, Sweetie.

I got a kick out of relating the most recent example of this trait when Jaime from S/V Kookaburra and I walked one recent morning. You may remember, that Kookaburra took a walkabout a couple of months ago. A few days ago, La Luna followed suit. That’s how I began the conversation. “So, La Luna took a walkabout yesterday.” Jaime looked shocked and concerned. “She did!?” (There should be a punctuation for a shocked question. I don’t think “!?” is correct; in fact, I’m sure it’s not.)

“Yep.” I replied in a smug tone. “But she has excellent timing.”  Jaime furrowed her brow.

“EW had the day off and number one on his project list was to change the oil in all on-board engines, starting with the big one.” (We call our Perkins diesel “Pinetop”, but I didn’t subject Jaime to that cuteness.)

And I continued thusly:

Evidently he’d broken a screw somewhere crucial to the project while we were walking yesterday. And he was going to have to drill it out, so he wasn’t in the best mood when I returned. He decided to wait until I went off to work before doing anything else. Afterward, he dealt with the screw, then started the engine in order to warm up the oil. Since this would take a few minutes, he went down below and grabbed a coffee which he took back on deck.

I paused for effect.

Jaime looked at me, and exclaimed, “Do NOT tell me that she waited to break free until the engine was running AND he was on deck!”

“She did.” He sat down with his coffee and seconds later realized they were moving. I told you she has excellent timing.” 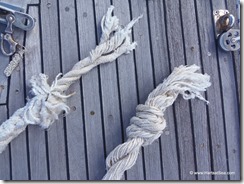 The pennant had chaffed through at the chock, despite EW’s meticulous attention to chafe guard. It only takes seconds for a line to chafe through and the guard had twisted askew. This pennant did not fit our boat, and clearly we should have made a new one prior to this emergency.  Our bad.

EW did not have a good morning, but things worked out well. He successfully untied the wheel (our wheel brake is on the list of repairs) just before he drifted onto another boat, and motored out to the channel. When well away from other vessels, he dashed below to grab his phone and called our friend Kirk from S/V Ainulindalë, who immediately jumped into his dinghy to help. It took them quite some time to jury-rig a system that attached La Luna  to the mooring. Once she was safe, EW dashed to the supply store to get new line and other gear. Then he spent the rest of his day off splicing a new pennant and attaching it to the mooring in choppy seas with additional aggravation caused by  the frequent large wakes from passing ferries.

He did not have a good day.

But he got ‘er done. 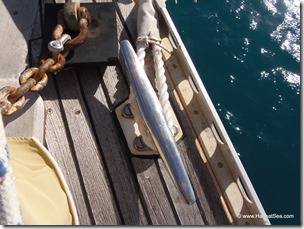 Most of all, thank you La Luna.  You are a wonderful boat.

At right: The new pennant.

you are looking for an interrobang symbol. :-)