LeeAnn ROCKS! Or Yet Another Reason We Don’t Charter

Our good friends LeeAnn and Peter aboardTwo Much Fundecided to become charter captain and crew last year and offer couples the opportunity to enjoy the Virgin Islands aboard a lovely catamaran with Peter’s music, Mimi the dog, and LeeAnn’s excellent cooking. Prior to cruising LeeAnn owned her own business employing 20 or so people, and is accomplished in many ways – she’s also the perfect charter host with an unflinching eye for detail.  While LeeAnn was visit family in Florida between charters, Peter posted the following on Facebook, directing it to LeeAnn.

I refrained from commenting, but a few minutes later he posted the item below, again addressing it to LeeAnn:

I could no longer remain silent.

When LeeAnn returned we met up at Tickles, where Peter, LeeAnn and I had a good laugh about folded toilet paper and bread bunnies. Turns out LeeAnn already folded the TP and was looking for a  new design. (Of course.) She’s like that, but she’s still a very nice person.

A few days later we were excited to host friends Ed and Lynn from New York. They aren’t sailors, but are great sports, and have known EW for 60 years – well Ed has. We invited Peter and LeeAnn and our friends Keith and Jaime from Kookaburra to come for dinner. LeeAnn insisted on making dessert. (She’s like that.) Later that afternoon I saw them on shore and she told me she was going to bring bread too. (Of course.) 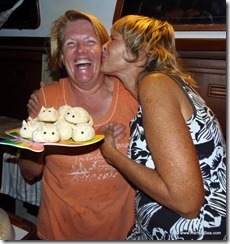 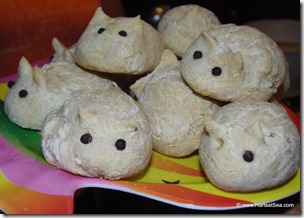 Note that while LeeAnn’s definitely had mouse ears, she had included peppercorns for eyes. Some of them fell out so we had blind mice. Yes, someone sang the song. There was also a discussion about  voles and moles and which one of the two had a tail and which one was a vegetarian. Cruising conversations are like that. 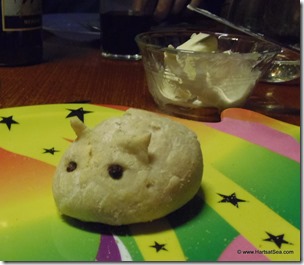 All but one of the mice was consumed that evening. 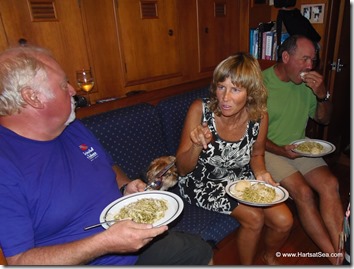 It was a great evening. I asked LeeAnn for her carrot cake recipe, and I’ll make it.

But I will never make bread mice, bunnies, or voles and I am never folding our TP.

So, we don’t charter on La Luna, but we’ll welcome Lynn, Ed, and other friends who can accept life aboard without such amenities.

If you want to enjoy this area aboard a terrific boat with a charming couple, and folded TP check out s/v Two Much Fun. It’ll be a vacation to remember.

LeeAnn definitely rocks but then you ALL do! Miss you guys!

So, Diana. Just had drinks with Kirk and Diana and Peter and LeeAnn. Taking bets on how long it takes you to make bread bunnies. You're up.

This from the one that told me ... you can't go cruising without Bakewell Cream ...I second the little bunnies in your future .... its a long trip across the big water ... have to keep busy! Hugs