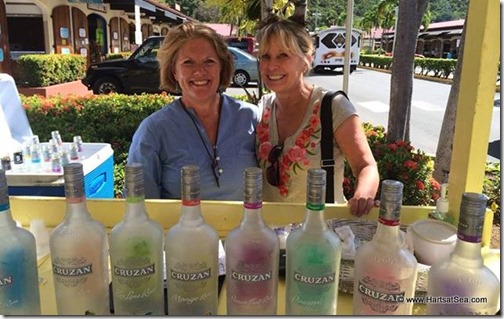 Maine is a small state. Years ago, EW and I were visiting Ottawa and met a couple from NYC at one of the tourist stops. Their knowledge of the other states was limited and I can remember her abject horror that Maine only had just over a million residents. “Do you know that there’s more people in Manhattan, alone?” she exclaimed. I refrained from saying they couldn’t be alone much, packed onto that island.

I’ve often said that being from Maine means that if you ask the right questions, you can find a link to any other Mainah in only three steps. Try it.

This week a whole lot of folks from the Northeast gleefully escaped the cold and visited St. Thomas on cruise ships. I saw a  plethora of Red Sox hats and shirts, quite a few Patriot hats, and two Buffalo Bills hats – offering all of them “free rum”. That’s my job.

One gentleman mentioned that he had vacationed in Maine since before he was born. His family had a place on Mt. Desert Island. It turned out that he knew good friends of ours – I found the link on my second try – and we gleefully discussed our mutual friends and the connection.  Then, with a crowd at the booth, he claimed to be a “Mainah” because, “I was conceived in Maine.”

I couldn’t resist, but immediately brought my Maine accent to the fore and said, “You know what we say about that, de-ah?” I paused and poured a tot of rum. “Just ‘cause a cat has kittens in the oven, don’t make ‘em biscuits.”

I got a good laugh and a few tips.

On Friday, there was only one ship in town and that makes for a slow day. Mine started out great, though. As I waited for oblivious tourists to move out of my path so I could push the heavy cart into place, I heard, “Barb, is that you?” I looked to see a pretty, petite woman behind big sun glasses. She removed them and I squealed, “Candace!”

Candace was part of the staff of the Cabot Celebrity Cruise, when Cabot Cheese hosts one giving, community-minded person from each state for a much deserved vacation. Candace and I hugged, chatted, and hugged some more. I met her sister, Roberta, and a few of her fellow co-workers, such as Carolyn Kingston, who grew up in Maine. Carolyn took this photo of Candace and me, and she gave me presents – one she made which I cherish, and a bunch of Cabot bling. I made pizza that night night wearing my new Cabot Cheese apron.

I would love to have met Holly Mead, from Dear Isle – Maine’s well-deserved winner. Bet we have some friends in common. Maine is like that.

Thank you, Candace, for reminding me of Tweet-ups, social media seminars, the Beach to Beacon, your sunrise tweets, and many of our friends in common. You brought a bit of Maine warmth to me in St. Thomas – and there’s no warmth like the kind you find with friends from Maine.

For those of you who know both Candace and me, you know that I tower over her. I sat in a stool for the photo. I could just hear Lynnelle saying something about it – so I had to mention it. Cheers all!

How I Broke a Nail

We’ve been fortunate that EW and I have both been able to have at least one day off a week together. That way, I can ferry 60 gallons of water to the boat and he can heft them aboard. I make two runs with six five-gallon containers. It takes me a half hour to unload the six containers into the tanks, using our nifty siphon hose. While I was on deck, our neighbors Tim and Julie  aboard M/V MacGregor II a cabin cruiser, returned from a charter and started to pick up their mooring.

I didn’t see what happened but looked up to realize that they had a problem: they weren’t hooked, Julie had run back to the stern to move the dinghy, and both kept looking over the side for something. That’s never good. I imagined that a line or the boat hook was under the boat, which would mean they couldn’t put her into gear.

I was rushing, but and thinking about the best way to get there in a hurry, and conscientiously decided to untie Lunah Landah prior to starting the engines. This is against protocol, but I knew she’d start – especially as I planed to start her with the throttle up higher than normal. There’s a good reason for that because if she doesn’t start on the first pull, she can get a bit stubborn and since I was on a “rescue mission” I didn’t have time for stubborn. 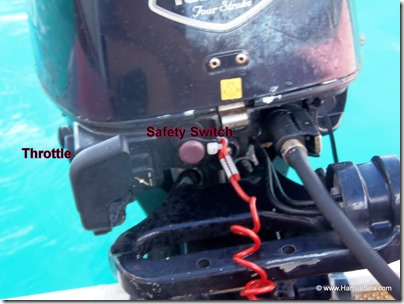 So, I untied the dinghy, securing the painter inside, started her up with power and then somehow did a stupid thing. I tried to loop the safety switch around my wrist at the same time I went to throttle down in order to put her into gear, but the safety cord was evidently around the gear lever. I managed to put her into forward, at nearly full throttle, without getting the safety cord on. Luna Landah  immediately pushed into the mother ship, listed to starboard and dumped me backwards into the water.

This was not a good thing. The dinghy is running, I’m in the water next to her, and I have no way to stop the motor.

My mind moved at lightening speed in many directions at once. None of them helpful.

“Wow. That’s how Lloyd Bridges always got into the water with his tanks on.”

“Hey, my sunglasses are still on.”

“Keep my legs curled up.” That was actually very helpful and instinctual. I came up at the aft starboard side of the boat with my legs curled tight to my body. At no time did any part of my body touch the spinning blades. I grabbed onto the handles and yelled for EW.

He’s a wonderful man. It seemed like he appeared on deck immediately and just as quickly assumed a look of horror. There was his bride, hanging on to the dinghy which was turning in counter-clockwise circles at warp speed. The important parts of the motor head were turned away from me, so I couldn’t reach the safety cord. I tried, until EW told me to work my way to the bow of the boat. 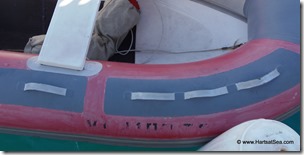 In those situations, I always do as EW says, and used the handles along the side to move farther away from the motor. That was a good idea. In the meantime, he grabbed a boat hook and planned to hook onto the boat during a revolution, pull it toward La Luna, and jump in. He looked pretty desperate while my mind started singing “Ring around the Rosie.”  I think I was getting dizzy.

“Stephanie’s coming!” EW shouted with relief, as our neighbor from SV Eagle blasted over in her dinghy with the same look of desperate horror on her face.

“Don’t get hurt!” I said, to Stephanie as she clutched onto our dinghy and leaned across the two tubes to reach our motor. Now, both boats were turning in circles.

Stephanie put ours in neutral, then pulled the safety cord to stop the engine. “Are you OK?”

“I never want to see that again,” said Stephanie. “Neither do I,” said EW.

EW, snagged our dinghy with the boat hook as Stephanie hovered next to me while I swam to the stern of La Luna. “Do you want to get in my dinghy?” she asks. “No thanks, he’ll put the ladder down for me once he ties up the dinghy. I’m really fine. Can you check on MacGregor, though?  This started because I was going to help them with their mooring.” She tootled over to our neighbors on the starboard side, while EW lowered the ladder.

By the time I got back aboard, Tim and Julie had fixed their own problems and Tim was in the water with snorkel gear diving on their mooring. Stephanie told them about our saga and both called over with their thanks to me for my good intentions and concern for my well-being.

Really, I’m fine. Well, I did break a nail and my arms are tired from the dinghy dance. Luna Landah sure knows how to twirl a girl.

Here I am after my dinghy dance: 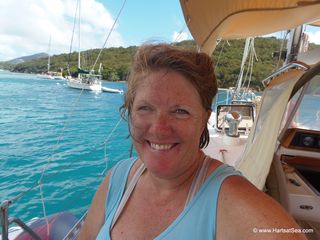