Home Archives Profile Subscribe
About a Landlubbers Advice re: Galley Cooking.
Christmas Away Across the Sea 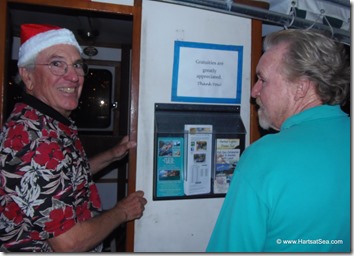 We are live-aboard sailors – no longer cruisers. We still live aboard La Luna, and we still love her, each other, and our life together. That’s the important stuff.

We still don’t have to shovel snow, nor do we worry about power outages and ice storms for our sake – but we do send best wishes or warmth and safety back to our loved ones in the Northeast.

As working live-aboard sailors, we no longer have the luxury of time …

Speaking of which – I was thinking this morning that we’re like the stereotypical 60’s urban couple. The kind where the wife takes the husband to catch the train to the city. She’s driving her station wagon and wearing her pajamas covered by her trench coat. Since we have one dinghy and EW needs to be at work around 8, two hours before I do, I take him to work. This morning I was freshly showered, but wearing a boater’s equivalent of a house dress, covered by a long-sleeved T-shirt and – let’s just say that if I had gotten into an accident, I wouldn’t have to worry whether I was wearing clean underwear.

My mother would kill me now.

Still, this live-aboard life certainly isn’t all bad. Did I mention that we don’t have to shovel snow and that in terms of ice we simply worry whether there are any cubes in the freezer?  Life is good in paradise.

Plus, there are perks of working and living aboard, and some of them we can share with our cruising friends. 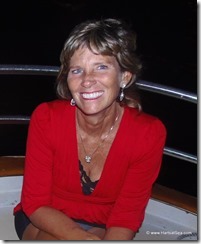 St Thomas held their lighted boat parade over a week ago, and EW’s company made a last minute decision to join the festivities. EW had a hand in that, as the company had decided to put antlers and reindeer noses on the ferries, making one nose red for Rudolf. Heck, if they were going that far, why not add lights and join the parade?

The company agreed, and said we could invite friends to join us. As you can imagine, EW and I are very good at that.  In the meantime, the company invited other employees and decided to send The Cat along and offer it as a paid trip. Suddenly, space became precious. We had invited 16 cruisers, friends, and family and all of them had accepted with glee, agreeing to bring their own libation, and an appetizer to share. A moving cruisers’ party! EW rapidly texted his manager, asking if we could take all of our 16, and he graciously agreed that we could fill “Rudolph” with only our friends. We had a great time. 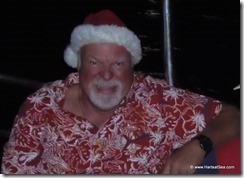 Having participated in the lighted boat parade in Maine in years past – when it has been incredibly cold and windy – hosting one in 75 degree weather is a treat. Our crew came dressed for the holidays and good naturedly sang many, many, MANY choruses of “Rudolph the Red Nosed Reindeer” all along the three full passes we made of the waterfront.

It was a great night. 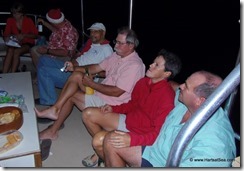 Given my druthers, sure, I’d rather we didn’t have to stop cruising and work a bit – but that’s not just a First World problem, but a privileged, Caribbean Cruiser’s First World Problem.  We’ll be cruising again by May, and I have nothing to complain about. 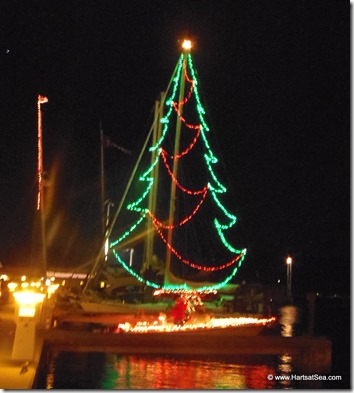 Merry Christmas to you and yours.

May your New Year be filled with family, friends, fun, love, adventure, and prosperity …

and just enough First World problems to keep you grounded. 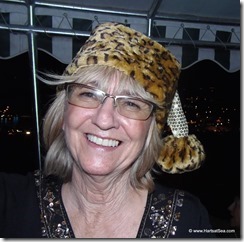 Barb Hart, One --  in her Leopard skin pill-box, Santa Hat. How cool is that? 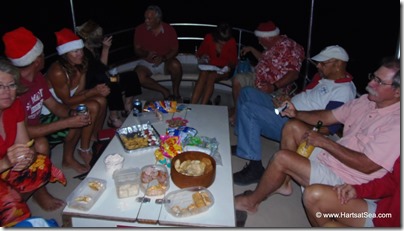 So fun to read this and recognize so many faces! We miss you all very much but we are also glad to be where we are having our own cruising experiences. A belated Merry Christmas and Happy New Year. All the best for your cruising plans for 2014. We're excited for you!