The Queen Mary 2 visited St. Thomas on the day after Christmas.

EW has no desire to ever go on a cruise ship, but I’d go on the QM 2 in a heartbeat.  She docked not far from us at the Crown Bay Cruise Ship Port – and she was beautiful.

“It’s probably just like any other cruise ship aboard.” Scoffed EW.

“I don’t think so! Look at her. She looks nothing like those giant shoe boxes with propellers.” As you can see, for someone who earns money because of cruse ship passengers, I have very little respect for the boats overall.

Later that day, EW had two passengers on Morning Star/Rudolf who had taken two cruises aboard the Queen Mary 2, one of which was a trans-Atlantic crossing. He learned that unlike the shoe-box cruise ships, the QM2 is a trans ocean liner, has much stronger construction, and the experience aboard is unlike that of the cruise ships we see more often.

I’ll tell you what’s different: The QM2 has a real ship’s horn and she knows how to use it. This is not the “If  You Wish Upon a Star”  tune played by  the Disney  ships. I was back on board when the Nieuw Amsterdam left the slip a half hour before the Queen Mary 2did. Once the Nieuw Amsterdam had backed into the channel, the QM2 offered a farewell salute that made our dishes rattle. You can here it on this video at about 17 seconds:

Now THAT’s a horn. While I watched with hands on ears, the QM2 gave the Nieuw Amsterdam three long blasts, which were returned by the departing vessel, whose own horn was no slouch.  They did this three times. I imagine the men or women at the horns had a good time. 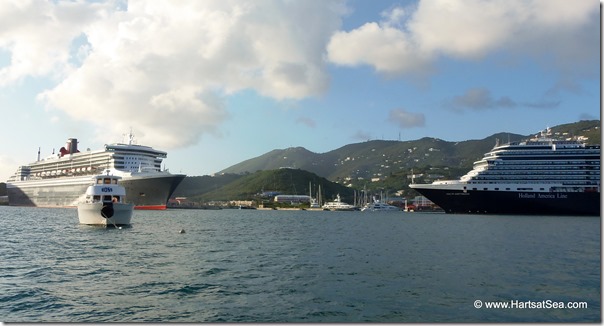 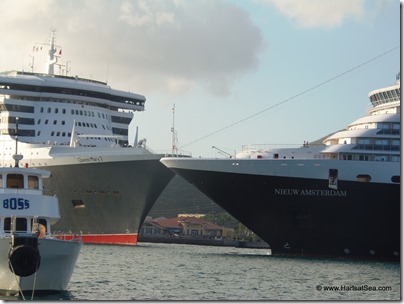 Two ships passing in a port.

I had to transport EW from the ferry back home that evening, and told him all about the horns. He didn’t really believe the QM2 was that loud until he heard it. Like any good ship, she offered three shorter but equally as loud toots prior to exiting the slip.

She’s a big boat, and I imagine that the next time she visits the folks on a nearby trimaran may opt to move. 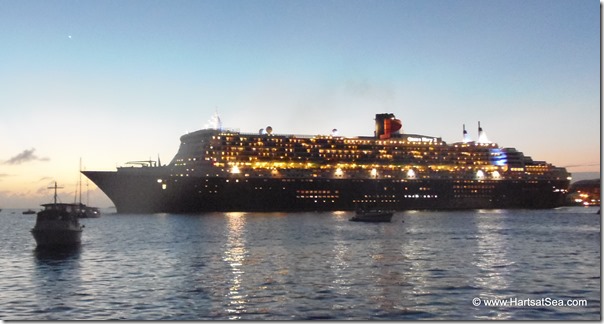 How close did she come to our friend’s trimaran? 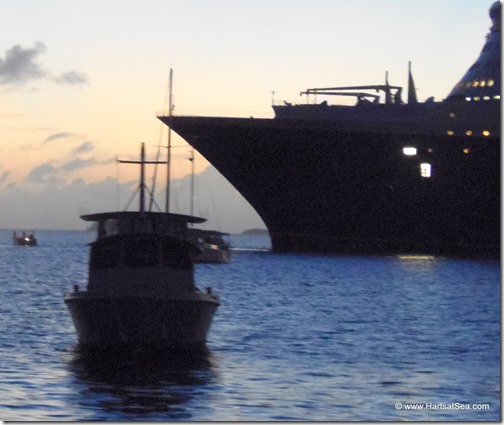 The small boat on the left directed the pilot. From this position, the pilot ooched her stern around, and they steamed out of the harbor. No harm no foul.