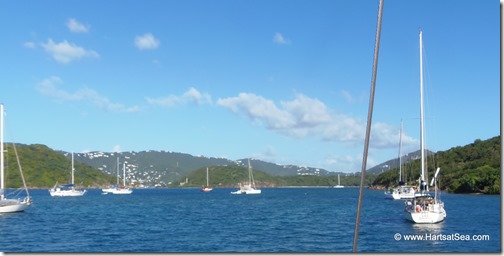 Our mooring field at rest.

I knew it had the potential of being one of those days before it even started. The dinghy has a hole in it that is partially fixed, which is like being a little pregnant. It has a hole. Until EW has two days off at the end of the week we inflate her up before every trip.

Since the dinghy will be hauled and under repair for a day and a half, I had to get 60 gallons of water on board myself. I also had to take EW’s laptop in for repair and purchase 4 ten-foot poles for the awning project, and get a few groceries. I had it all planned. First, I got 20 gallons of water after delivering EW to work. Then I cleaned up a bit, packed the laptop and headed ashore. All the while, writing in my head about this glimpse into a Caribbean live-aboard’s day.  It wasn’t all that interesting, but I had plans to juice it up a bit. Fellow cruisers would go “oh-hum” and land-lubbers could once again be in awe of what we do to make it work. No big.

Here’s the much shortened version of the original post:

Tied up at dinghy dock; walked to computer store and was told technician was out for a week; walked back to marina office and asked them to keep the laptop for me; walked to pharmacy and grocery store, filling the backpack; walked from there to ACE and purchased 4 ten foot EMT steel poles, which they kindly taped together so I could carry them; gave cruise ship couple directions to three beaches ( Seriously, would you ask a sweaty blond with a backpack and four ten-foot poles for directions?); took the poles to the watering place; bought two more water jugs (more on that another time); filled up 6 five-gallon water jugs and carefully loaded it all aboard the somewhat deflated dinghy. (Should have pumped it up before filling the jugs.); headed back to the boat.

For future reference, the partially inflated dinghy does not plane when it carries 240 pounds of water, 4 ten-foot poles, me and a few groceries, so it was a slow, wet trip to the boat. There, I stowed the laptop and groceries in the cockpit,  and then I removed the tape from the poles and carefully placed each one safely on board. Whew. See – I could have made that more interesting, but there’s already been two posts about getting water on board, and all cruisers/moored live-aboards have days like this.

Now, it gets interesting. My first priority of business was to get the poles in the awning, as we’ve had a bit of wind and the awning without poles causes the boat to “sail” on the mooring. So there I was on deck working this out when I heard our neighbor Stephanie from s/v Eagle, “Barb! Come help me!” 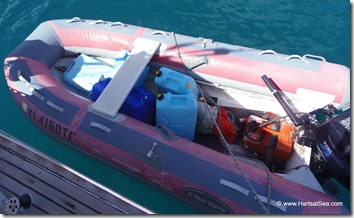 At sea or on the mooring, when a neighbor asks for help, you just go. Remember, I’m going in a slow, partially inflated dinghy with 240 pounds of water. I get aboard and start her up to head for Eagle when I see Steph in her dinghy heading past La Luna’s bow, so I follow. And there was Kookaburra, Jaime and Keith’s Island Spirit Catamaran, adrift heading down the mooring field. That is not a good thing.

Steph jumped on board but couldn’t get her started. Most of us leave the keys in the ignition for just such events, but Steph is on a monohull like I am. She tried to start the port engine and thought that they had left it unhooked to the battery. Actually, Kookaburra’s port engine is in the shop. They have a starboard engine only and while IO knew that I wasn’t all that confident that we’d be able to maneuver her on one engine – especially in the wind. Steph wanted me to call Keith and Jaime, but I didn’t have my phone on me and by now Kookaburra’s bow is heading for La Luna’s starboard side.  We fend with dinghies and I suggest we simply tie her to our boat. I scramble back to La Luna for a dock line while Steph – the clear hero here – takes a line from her dinghy  and ties it to Kookaburra’s  port bow cleat.

In the meantime, I rig a line from our stern cleat, and we trade lines; I cleat Steph’s to La Luna, but my dock line is too short and Steph can’t attach it to the starboard cleat on Kookaburra. No worries. She’s a cat, with no heavy keel to weight her down, I found that I could – barely – pull the cleated line in so that both would attach.

Done. Safe. Whew. Steph says, “I have to go to work, you OK?” “Sure. I’ll give them a call.” So I get out my phone and text Keith. “This is the view off my stern. Everything is fine. No damage, but you need to call me.” 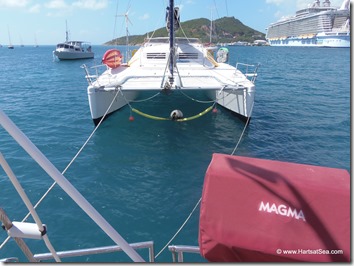 Then I called him and he came home.

He got his snorkel gear out and found the problem with his mooring. The shackle had broken – the pin was still wired to it, but the screw side of the equation had failed. In fact, it was hard to feel the screw ridges on the shackle (I know there’s a word for that. EDIT: EW has since told me that word is "Threads"). It was a bad shackle.

While Keith worked on his mooring, I worked to get the water aboard and the dinghy pumped up so that I could help with the next step – moving Kookaburra home. Keith didn’t think he’d be able to steer her well with one engine, so first we tried to tow her using the two lines we’d tied on the bows. I said to Keith, “Remember, I’m physics challenged. You will have to be clear with directions.” He agreed, and said, we’re going to move her towards shore so there are no boats between us and to try to keep the lines taut and pull in the same direction.

I failed big-time. And since Keith was way over on the port side, he couldn’t see what was happening. I tried to go forward and my boat was pulled so that I was hauling to starboard, straight out for Kookaburra’s  hull. I figured I was doing something wrong, but found out that Keith was having the same experience. Note to self: tow catamarans from one position, preferably from the center -- however, as Stephanie and I discovered, it’s possible to tow from port or starboard bow in an emergency.

Keith got on board and started the working engine and I chugged along beside him ready for tugging duty. He was masterful at the controls and managed to attach to the mooring on the first try. I was no help at all.

All is well. Everyone is where they belong, and boy are my arms tired.

This was taken from the deck of La Luna. Of course conditions, wind and current change. At the time Kook escaped, she missed Sanctuary, passing her starboard side. P/V Macgregor is moored to our starboard and would have been hit by Kookaburra, but they had taken her in to Crown Bay for fuel. This was a good day.