If you follow the news or Facebook, you’ve heard about  Thanksgivukkah. But have you heard about Hurricane Thanksgiving?

Traditionally it’s celebrated in St. Thomas on the Third Monday of October. Even though “hurricane season” lasts from June 1 to November 30, most hurricanes that have hit St. Thomas have done so in August, September, or October. So, according to the report on “Hurricane Thanksgiving”, if a large storm hasn’t hit St. Thomas by the middle of October, the residents here feel safe.

Humph. Celebrating in October seems a little early to me. The only storm to hit in these islands in 1999 was Hurricane Lenny, which pounded St. Croix with wind gusts of 112 mph. Lenny caused over 330 million dollars of damage to Puerto Rico and St. Thomas.

Hurricane Lenny formed on November 13, which is about three weeks after Hurricane Thanksgiving, so you’ll pardon me if I’m not celebrating just yet.

We have had a wonderful hurricane season, and I am deeply thankful. This was a big stressor for me, yet we only took our sails down for one storm, which served as a fine drill for storms that went to the north of us. We had no reason to move to one of our two self-designated safe harbors in Puerto Rico.

We have been very, very lucky.

I’ve been on a serious knocking wood campaign – and I do mean serious. Our friend and fellow cruiser Kevin Boothby, who single handedly sails to Maine and back every year to avoid hurricane season, stopped by the other day and made a comment about what a great season we’d had.

Kevin smiled and went on with his conversation.

He gave me a look, you know that “are you OK?” look and knocked on the damn wood.

We’ll be celebrating Thanksgivukkah with Barb and Jeff and their friends – especially with Mina who is going to teach me to make latkes.

I think I also will celebrate Hurricane Thanksgiving. Just as soon as November is over. 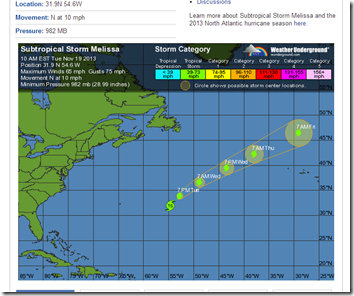 And, to be clear, she started well north of us and she’s heading northeast. 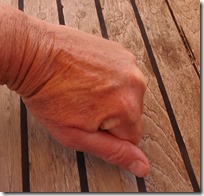