A Taste of Maine

In addition to missing friends and family – during this time of year, I miss Maine’s foods – and not just the real “lobstah” with claws.

Photo used with the permission of the photographer, Catherine Frost, an outstanding marketing professional. Check out her business, Folio Marketing & Creative on Facebook.

Facebook has allowed me to stay in touch with friends and family back home and at sea. On one recent day, my Maine Facebook friends had my mouth watering with posts about Macoun apples, Bean Suppahs, and Maine Lobstah. In late August I craved fresh Maine corn on the cob, caved,  and bought days old corn from Florida. That’s just wrong.

My food cravings “at sea” begin in the spring and continue through the autumn: 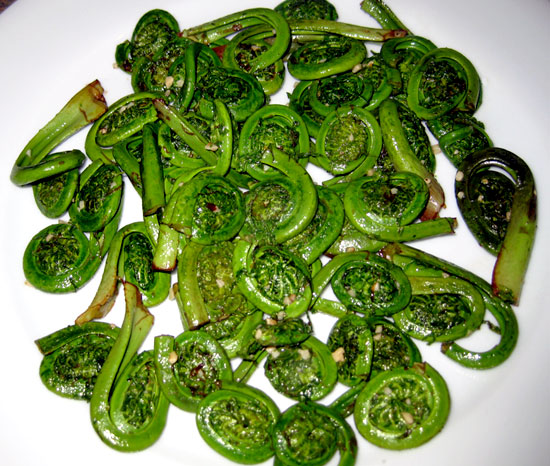 May and June. Rhubarb. Just like every home I grew up in, the one EW I bought had a rhubarb plant: rhubarb raw with lots of sugar, rhubarb sauce on ice cream and strawberry/rhubarb pie. I miss rhubarb.

June into July. Strawberries. Favorite’s birthday is in late June, and as he got older, I served strawberry shortcake as a treat. While one can use sponge cake or pound cake for this dessert, the real Maine way is to make sweet biscuits and real whipped cream. Oh, my. 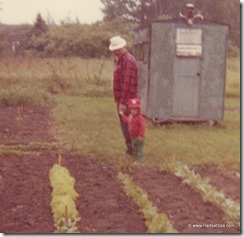 When I was a kid, we’d also start to pick green onions and lettuce in June and keep on enjoying them through the summer. Real baby carrots – not those fake, uniform nubs offered in the stores – were pulled from the ground, rinsed under the outdoor spigot, and eaten as a back-yard snack.  At left: My dad and our young neighbor Brendan F., checking the garden in 74 or 75.  Look at that lettuce!

July If things were going well in the garden, the corn would be knee high and the first peas would be ready to pick. The first raspberries would ripen in mid-July. My Grampa Robbins had a raspberry bush – well more of a wild thicket, actually – right outside his one-room cottage. I loved going out in my PJs in the morning to pick raspberries for my cereal. Later, my dad planted and tended raspberry bushes at the far end of his garden, lovingly covering them with netting to discourage the birds. Mom’s favorite pie was raspberry and each Thanksgiving I’d make it from raspberries I’d frozen in the summer. And as for those peas? A traditional Fourth of July meal included peas and salmon. The best Fourth of July meal had fresh-water salmon. 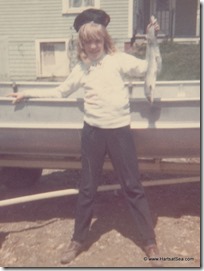 At right: This photo was captioned: “My first fish.” It is my only fish. I was 10. It was a salmon caught in Sebec Lake – in Maine, of course.

August. Green Beans, cucumbers, blueberries and – finally – corn on the cob. In Maine, it must be fresh picked that day. Here’s the old Maine recipe for corn:

Fill a pot half way with water and bring it to a boil. Go out in the garden, pick and husk the corn and run like hell to the house. If you trip and fall, toss that corn to the pigs and start again.

This is not much of an exaggeration. I don’t turn down a lobstah feed at any time of the year, but the best shore dinners are served with fresh corn on the cob and are therefore best enjoyed in August and September.

September – October All of the fall vegetables, are delicious in Maine, but my favorite Maine treat is a crisp, tart, fresh apple. Cortlands and Macouns were our family’s favorites. My mouth is watering.

Fall – Winter The Maine Bean Suppah. First, “supper”, pronounced suppah is the normal evening meal in Maine; “dinner” was served at noon on Sunday, after church. Suppah was served at 5 and if you were attending a bean “suppah” at the local church or grange hall, you’d best show up early. As this excellent post from Maine says, first you pick your piece of pie, and set it at your place on the table; and then you enjoy an all you can eat feast of Maine Baked Beans, Cole Slaw, various side dishes, brown bread or biscuits, and – in later years – hot dogs. Usually, all of the food is home-made and delivered to the venue in the afternoon. A group of volunteers arrives at the sight early in the morning to cook massive of yellow-eye and pea beans in vast pots or casserole dishes. Daddy made the beans at home, and most Saturday night suppahs in the Huff house were bean suppahs with home-made biscuits.

We enjoy eating local foods, especially in Trinidad and Grenada, but, on some days I may see something on Facebook, or simply be reminded of the season, my mouth waters, and I begin to crave a food from home.

To all of you back in the Northeast – please enjoy some of those treats for me. To all of you who cruise – what foods do you miss? It’s all part of our adventure.

Posted at 10:04 AM in Flashbacks and Stories from Home | Permalink | Comments (3)

EW had a rare Sunday off.

Sunday is football day but he proved his love to me by agreeing to spend the afternoon on Honeymoon Beach.  We packed towels, books, sunscreen, and some money for the bar and lunch.

For those who don’t know, Water Island is one of the two islands in the Charlotte Amalie harbor area. A number of people live there, taking dinghies or the ferry to the main island for school and work. We are moored off Water Island, and spent last winter anchored off Honeymoon Beach. Honeymoon is the gathering spot for Water Island, with two beach bars, two pavilions for events, Monday movie night, a roped off swimming area, and plenty of room for dinghies to tie up on shore or anchor out.

We who cruise love Water Island, and so do the local folks. Face it, EW and I aren’t currently cruisers. We are live-aboards who are moored in St. Thomas. There were no cruisers on Honeymoon on Sunday. Most of the people there live on Water Island or took a private boat out from St. Thomas. Some others came in off boats, as we did – but most of them haven’t cruised for years. It was a different crowd with a lot more dogs than a cruiser’s only group ---- and a big screen TV with the NFL on-line plan.

Neither EW nor I knew about the TV when he volunteered to spend Sunday as I wanted. First we went for a swim. After our dip, we played one of the beach games available, one of those bean bag toss things. EW beat me. Then we wandered to the bar and food shacks. Over the summer Lisa and Giorgio, the new owners of what used to be Joe’s Beach Bar, had installed a new food trailer, additional seating, and a hammock or two. They now have a menu with appetizers, salads, sandwiches, and the required fried beach food.

After we ordered, I looked toward the paved seating area and saw that large screen TV and the Packers game. EW glanced that way, then whipped his head back towards me, just like someone trying to avoid ordering a hot fudge sundae by looking at the view instead of the ice cream shop.

“You know.” I said, “I really don’t care where we sit. Want me to move our stuff to be near the game?”

He looked hopeful and guilty at the same time. “Really, I don’t mind. You can watch football, I’ll mingle and watch with you, and you will at least know how the Bills are doing with this third quarterback.” He dropped the feigned indecision, and I moved our stuff. 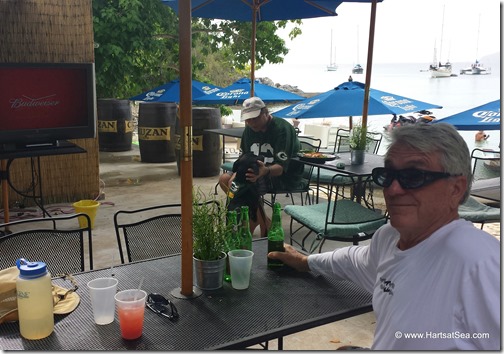 When I mentioned how delighted EW was to be able to join me on the beach and still watch football, Scott deadpanned, “And is better.”

Best of all, Scott, the Packers fan with the NFL plan, kindly bounced over to the Bills game every so often, and  then changed the channel altogether when the Packers game was over. 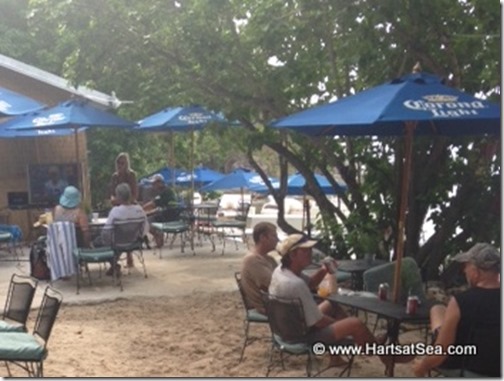 Alas, the Bills lost. EW didn’t expect them to win; "It’s a building year”, he says.

In the meantime, I “dog sat”, bought the drinks, went for another swim and visited with some of the crew on one of the day-sailing boats. Since I hadn’t taken my camera, I can’t show you a photo of Shorty, the black lab/short dog mix that one guy calls “Big Head", riding on a paddle board for the first time with one of his lady friends.

Or the photo of that same woman learning to fly an aquaboard – and then using a hula hoop while hovering 30 feet above the water.

Giorgio and Scott did kindly take a few photos with their iPhones so I’d have something for this post. 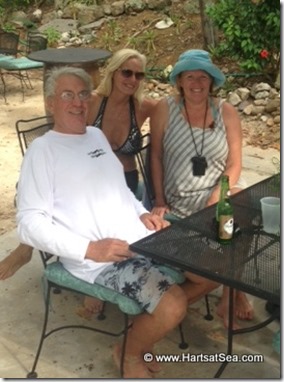 By the way, Giorgio and Lisa call their new bar “Dinghy’s”. They have the old bar trailer and a new kitchen trailer, and all that seating mentioned. A tiki roof for the paved seating area is somewhere in a container making its way to St. Thomas. So all you who actually cruise – let’s meet some Sunday at Dinghy’s – when EW and I have the day off.

That’s Lisa at left. My thanks to Scott and Giorgio.

NOTE: In addition to all the high quality fur-fixes, one of my favorite parts of the day was a brief chat with Giorgio, who is from Buenos Aries, Argentina. We had a brief chat about our next adventure, Tango dancing, waterfalls, bus rides and food. Lisa and Maggie fed our bodies and Girogio fed our dreams.