Home Archives Profile Subscribe
These Hands Smell Like Gas, but They Don’t Smell Gas. That Would be Silly.
And is Better

I’ll always make my biscuits with Bakewell Cream, insist on real maple syrup on my pancakes, prefer brown eggs for no reason, drop my “r’s”, and retain reams of useless knowledge of my home state – but I’ll not be a Mainah for much longer. We are “moving” to Florida. 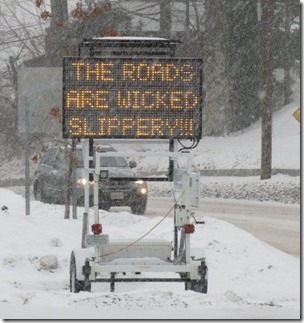 In my 20’s, I couldn’t imagine living where I couldn’t enjoy the four seasons.

NOTE: The photo at left was tweeted out shortly after Christmas in 2010. We were watching football at an outdoor bar in the Bahamas. I laughed.

I haven’t shoveled snow in three years, and I don’t miss it at all. Sure, I’d like to visit Maine some autumn, view the leaves, eat fresh apples, and take in a country “fay-ah” but I like our lives just fine.

Besides Maine kicked us out and I was some pissed er ticked off.

When we left to go cruising I resisted “moving” from Maine and we continued to file and pay our income taxes with the state, retained our UPS mail box service in South Portland, and flashed our Maine Drivers’ Licenses when we needed a quick photo ID. I had no idea that it was possible for travelers to renew their Drivers’ License from away, and let mine lapse. Shortly before EW’s deadline approached, he called the appropriate Maine department to get some advice. Ultimately, he found out that he couldn’t renew his license because, “You are no longer a resident of Maine.”

And those taxes we paid in 2011 and 2012? I called the Maine Revenue Service and – politely – stated that one Maine department can’t take our taxes while another Maine department says we aren’t residents. I was very nicely told I was correct and that I could file under Maine’s Safe Harbors program and get all our Maine taxes back for the two years we’ve been at sea.

I am so very proud of being from Maine, and of Maine, and of having generations of hardy, funny, hard-working, dancing, card-playing, hunting, fishing, neighborly, clever, good-humored, and loving Mainahs on both sides of my family tree. I am a Mainah at heart.

But now, I’m a “Mainiac.”  Not this Urban Dictionary definition of Mainiac – though I dearly love it:

Derogatory term used by Massholes to describe Mainers who drive properly (i.e., without cutting anyone off or flipping off the state patrol).

I'd rather be a Mainiac than a Masshole.

One who is from Maine. Often used when referring to driving techniques of the receiver.
Attempted insult from citizens of Mass. to us in Maine.
See Masshole

Hey, Mainiac! What the hell do you think you are doing?!? Drive better!

Anyway, my definition of “Mainiac” and one I heard frequently in Maine was:

1. Maniac. Any Maine born person crazy enough to move away the State of Maine.

I am a Maniac.

EW is just a transplant. Come on, you’ve heard that old story about the transplant who was excited that he new-born son would be a “native Mainer” until his neighbor informed him, “Just ‘cause a cat has kittens in the oven, don’t make ‘em biscuits.”

So we have a new address in Florida; we’ll register to vote there; and in December we’ll take a few days and fly to Jacksonville to get our drivers’ licenses. We’ll soon send out notices of our new address to friends, family and all business interests. We are moving have moved to Florida.

Why Florida? Two reasons: 1. They don’t have a state income tax;  2. There is a mail services company, St. Brendan’s Isle, that has served thousands of world sailors for many, many years. They have assured me that we can easily establish residency and get our drivers’ licenses – as long as we can pass the test. (Fingers crossed.) I may be moving to Florida, buy my Maine roots go deep. This is one of a number of similar direction signs pointing the3 way to real Maine towns.

By the way, EW has learned that the second one down is pronounced “VI-anna”.

My dad was born in Athens and never went to Madrid, but frequently visit MAD-rid. In Maine, that is.

I’ll be a Mainiac living living aboard La Luna wherever the wind takes us, and “domiciled” in Florida.

The Harts are still at sea, in the best possible way.

FOLLOW-UP:  Thanks to one my Mainiac niece, Karen, I have found a website for us Mainiacs, exiles.com which has this quote:

"Mainiacs away from Maine are truly displaced persons, only half alive, only half aware of their immediate surroundings. Their inner attention is always preoccupied and pre-empted by the tiny pinpoint on the face of the globe called Down East. They try to live not in such a manner that they will eventually be welcomed into Paradise, but only so that someday they can go home to Maine."

We have often thought of changing our state of residence to Florida for the same reason. Taxes! And I just renewed my Ga drivers license while holding my breath. We didn't have an address so I fudged and used my bank paperwork that had our old address on it. (I didn't become an illegal alien when we sold the house, I won't even go there). It looks like we may be around in dec and Jacksonville is only 45 mins from our boat. We would love to meet up with y'all and have dinner. And even show you our boat if you were up for it.

It's Bakewell Cream, you've been away too long! And what about DE-troit, Maine? :)

I felt as though you were right here having a conversation with me when I read your blog. I read part of it out loud for Dan, too. As always, Barb, Thanks for the laughs!

OMG Kate. Fixed it. And I have a can in the galley. Get one whenever I go home. Bakewell Cream. Ayuh.

Thank you, Roseann. You are too kind. Hugs.

We switched to St Brendan's and we're from Florida! It's just way easier to get things done. They scan our mail so we can decide if we want to forward it or not - or just scan it and save it. It's a service - not a "re-birth"! You'll always be a "Mainah" Barb!