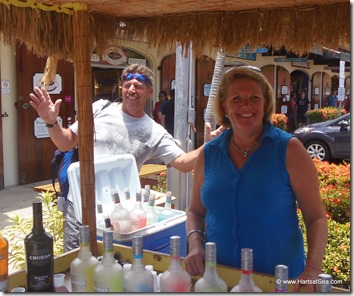 That’s a phrase EW has been known to exclaim every so often. 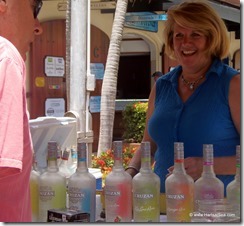 I’ve no idea why.

Now, it’s appropriate as I am running the Havensight Rum Cart.

As you can see, visitors to Havensight love me – just as they have loved all of my predecessors. 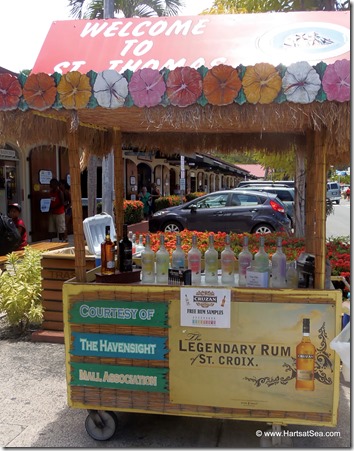 Premier Wines and Spirits distribute Cruzan® Rum – the official rum of the Virgin Islands – and they have a booth at the airport where incoming passengers are offered a sample of one or two their flavored rums. At Havensight, we have a heavy, rolling, colorful cart and offer 11 varieties for sampling. We’d offer more, but I can only fit 11 bottles in the blue cooler.

Legend has it that a crusty cruising sailor knew someone both at Premier and at Havensight and talked himself into a job handing out rum. Havensight Mall built the cart, Premier supplies the rum and pays the server, who has three jobs:

1.  Welcome cruise ship passengers and other tourists to St. Thomas

3.  Tell them where they can purchase said rum.

The first crusty sailor “retired” and passed the job along to a buddy. When he “retired” a lovely cruising lady took the job. When she passed away, her husband handed out rum until he got a captain’s job. Now, Pat from S/V Lone Star holds the position, but she’s been off island and otherwise tied up this summer so I have it. We hope to be able to share it over the busy season if I can find something else to help fund the cruising kitty. We work only on days when there is at least one cruise shop docked at the WICO dock in Havensight. That's about 16 days a month this time of year, and 25-30 during the busy season.

This is a great job for an extrovert. 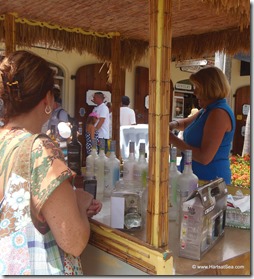 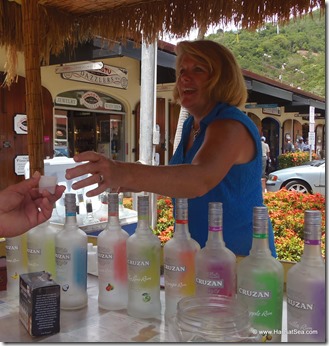 I am an extrovert.

I’ve met folks from Mexico, Canada, the UK, Denmark, all over the US, and from a surprising number of Caribbean islands. Evidently the Islanders' version of a “stay-cation” is to take a Caribbean cruise. Who knew?

Generally, I start by saying, “Welcome to St. Thomas, would you like to try free samples of Cruzan® Rum?  Some stop with a “Sure!” or “Hell, yes!” The first in a couple or group may say “No thank you,” and walk on, while the trailing wife, husband, friend, or sibling gives a look of disbelief and stops in his/her tracks. My favorite are the folks who say “No thank you,” but who’s eyes and body language exclaim “Hell, yes!”. For those I’ll say, “The two operative words in that sentence are FREE. RUM.” Usually they’ll laugh and stop to try some.

I’ve learned not to pour full shots. Those who want full shots are not trying the rum, they are getting a cheap buzz. Most folks ask for “a small amount” but often at the outset I’ll say, “I’m just going to give you a little bit so you can try as many flavors as you want.”

If folks – generally women – are agonizing over which rum flavor to try, I say, “You can try more than one. How else will you find your favorite flavor?” They are delighted. Some have tried little bits of all of the day’s eleven varieties.

Often I serve just one or two people, or four who are traveling together. It’s a really fun job when a crowd builds. Instead of immediately asking each person’s choice, I’ll say, “I’m now pouring Mango! Anyone want to try Mango?” Even if someone was thinking “Banana”, they usually will go for a sip of Mango. After which, I’ll pour Banana. Everyone gets to try their choice and folks who play along with us get to try new flavors they might have missed.

One day I had people three and four deep at the cart, of about three different groups and one honeymoon couple. I poured 14-16 of each flavor and folks had to pass it back to friends and strangers, so they got to know each other: black, white, American, Canadian, British. Someone found out about the newlyweds and wanted to have a toast. Eighteen pours of Banana and two of Pineapple and we all raised our sips to the bride and groom.

Havensight provides warehouse space for the cart and my stock of rum and cups. I spend a half hour before and after my shift setting up/tearing down and cleaning and stocking the cart. It’s an over-built, heavy cart, and provides me with exercise pushing it to and from the spot.

I pretty much love this job. We’ve already learned that I’m dope, and now we know I’m good at running the rum cart.

Want some rrrrrRum, me bucko?

For the record the flavored varieties of Cruzan® Rum are:

My favorites are Coconut, Guava, and Vanilla.

Yep, tough job, but evidently someone’s got to do it. Oh darn.

P.S. The first photo was taken by the gentleman’s wife. The rest of me were taken by a 16 year old girl who’s parents tried the rum. She did a great job.

I bet you attract many people, your so friendly Barb. Have you met cruisers from Maine? Well I must add that your hair looks great!!! you look great!

Awesome! Its genuinely awesome article, I have got much clear idea on the topic of from this paragraph.