Home Archives Profile Subscribe
Focus! Focus on the Dream; Focus on the Means
The Texas Chili Society of the Virgin Islands ...

In Cruising Mode, a day off may mean a day off from hiking, music jams, domino games, and cockpit parties. It is a day of rest, a reminder to slow down and relax.

In Working Mode, a day off means it’s time to get things done.

Maybe this is why we didn’t go hiking in Maine. We worked 50-60 hours a week, worked on the boat, did “boat-hold” chores such as laundry, grocery shopping, and cleaning, and sailed as much as possible. We’re back to that life now, except in the Caribbean where it’s warmer; and we’re on the hook.

I had Saturday and Sunday off, while EW worked both days and only had Monday off this week. I decided to handle all off-boat chores on Saturday so I could sew on Sunday and wouldn’t have to take EW to work two days in a row.

On Saturday, after playing with Facebook, writing a bit, filing an invoice for my J O B, and doing a soupcon of research, I got right to it. First, a bit of boat cleaning, then garbage, laundry, gas, and water. This would be my first attempt at getting water by myself – a process that works best when two of us are available. (Below, a photo of the two person process in which EW grabs the jugs.) 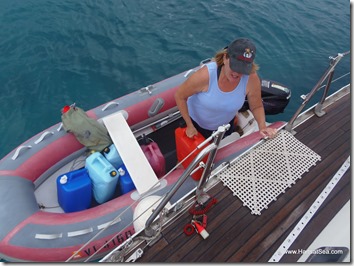 Last week EW loaded 80 gallons of water on board alone. My hero. He filled the tanks, and had 10 gallons left over for me to start with, so I knew I could nearly fill the tanks on two runs of twenty gallons each.

I’m not sure what you do when you can’t sleep  but I generally lie there and think of things. Often I think of new projects for EW, or how to solve a problem I have in a current project, or how to do something I never done before, or other new projects for EW.  A few nights ago, I pondered on whether I could get water on my own, and wondered, “Just how much does water weigh?”

After emptying EW’s stockpiled ten gallons of water,  I gathered the laundry, garbage, gas jugs, water jugs, and an unused dock line and jumped into the dinghy for shore. Since it’s not nice to leave laundry unattended in the washers and driers on a busy Saturday, time management was paramount.

1. Tie up dingy at dinghy dock, get a cart, and trundle laundry and garbage to appropriate areas.

4. Take dinghy back to dinghy dock and arrive back at the washers just as one load has finished and while the second is still in its final spin dry. How’s that for timing?

5. Transfer laundry to dryers, head back to dinghy and scoot out to the boat with the water and fuel. Place fuel jugs on deck. 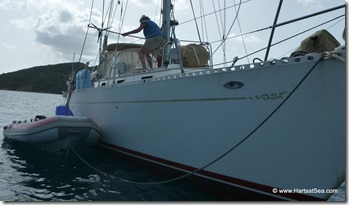 6. Tie the dock line around the handles of two jugs, leaving a big loop. Exit the dingy at the step and haul it forward, cleating it so that it’s next to the spinnaker halyard. Use a boat hook to grab the rope, secure the halyard to the rope, and haul away with one hand while controlling the jugs – sort of – with the boat hook.

It worked! Quite well, actually. 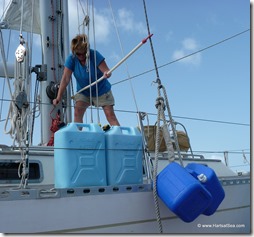 I emptied the jugs and scooted back to the marina, where I immediately refilled them with water, and then went back to the dinghy dock.

7. Fold clean dry laundry, and head back to the boat with jugs and clothes, repeating my jug raising technique.

In the meantime, Jaime and Keith on Kookaburra were back from their Saturday morning of work. I understand the conversation went something like this:

“What’s Barb doing with the dinghy?”

“Why would she do that in the middle of the day?”

“Maybe she has to fix something.”  That’s a generous assumption. Unlike Jaime, I fix very few things. EW fixes. I break things and/or request projects. 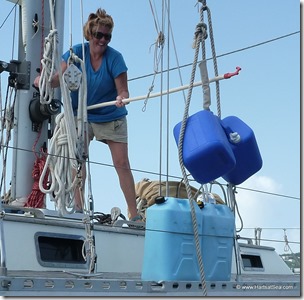 “No. She’s getting water! That’s brilliant!”

S/V Kookaburra is a catamaran. With two scoop hulls for easy access from dinghy to deck. Jaime, AKA Cactus Blossom brilliant in all things except weather prediction, hasn’t had to learn to deal with living on a monohull with a five foot freeboard.

While lifting my last two-jug load, I heard a dinghy and “That’s brilliant! I’m so impressed!” as Jaime sped over to take photos of my jug raising technique.

After that, getting groceries was a piece of cake, involving dinghy ride, safari bus ride, and transporting over 40 pounds of groceries back on the safari.

We need to go cruising.

You mean you haven't begged, bartered, or sold your favorite anything for a watermaker yet?

You're brave, Barb. Brave and resourceful. I'm very impressed by your hoisting technique!