Why This Works for Us

During a delicious dinner and a lovely evening aboard Kookaburra, Jamie and I realized that both couples had twenty-something wedding anniversaries coming up. How nice. I love every year added to those we’ve shared together and I love hearing about others celebrating wedding anniversaries. (As I write this, Rebecca and Mike from Zero to Cruising are celebrating their 10th. Congrats!)

Jamie brought up something else that she and Keith had noted on their recent trip back to Massachusetts, most of their long-time friends have marriages that have lasted. I think she said that there is a group of six from college days, who are all still happily married.

My two closest friends from college, my two most long-standing forever friends, Cathy and Kathy have also remained happily married for over 20 and over 30 years, respectively.  In fact, when I was reminded of Kathy’s 30th – four years ago – I was aghast. “That can’t be,” I said. “You got married the year we graduated college.” Kathy knows me well, smiled, and patiently broke the news, “Barb, our 30th year reunion is this year.”  I got over it. We were 10 when we graduated. 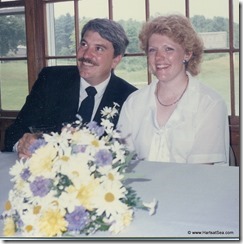 The day this posts, EW and I will celebrate our 28th wedding anniversary. One of the reasons our marriage works is because most of our friends and family – including our sailing friends – have also been able to keep their marriages, strong and predominately happy for many years. Positive reinforcement, encouragement, and establishing expectations 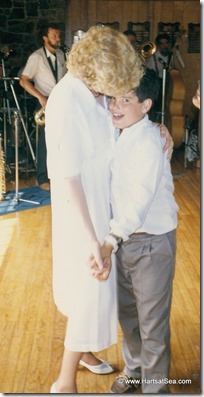 help us through the less fun times. And that positive reinforcement has been provided by our divorced love ones as well. Heck, I married a divorced guy. That’s how I got Favorite, the bonus son.

But I digress. In addition to the modeling and support noted above, there are at least three other main reasons our marriage and this lifestyle work for us.

So, here they are – in reverse order of importance:

We both like this lifestyle, and have fully embraced it. But you know what? We fully embraced the “Fixer Upper” lifestyle as well. Once we decide on something as a team, we pull together as a team. Come hell, high water, Cape Fear, or mudding sheetrock.

We each have our own creative outlet. EW has his music, and I write. We make sure to plan some time for each activity every week, we listen to and encourage each other, and we absolutely enjoy and celebrate the other’s progress and successes.

And the number one reason --- drumroll please --

We both have an extremely developed sense of humor and share it often. When I was talking with Jamie, I told her about the deal EW and I have. When we first met, he was never getting married again, so we moved in together. I told him I’d only live with him for two years without a marriage proposal and then I was gone. He proposed after one year, but qualified it. “I’m not sure I can be married for life,” he said, with brown eyes twinkling. I glibly replied, “that’s no problem, but I want a 50th anniversary. When I was young, a number of my aunts and uncles celebrated Golden Wedding Anniversaries and I want one.” “OK,” he said, “but then I may be out of here.”

Ever since, on our anniversary, EW has always mentioned, “One down, forty-nine to go.” or “Twelve down, thirty-eight to go.” Somewhere in there, I let him know I wanted first refusal on his next fifty years. We call that “the option”.

Come this anniversary, I fully expected to hear, “Twenty-eight down, only twenty-two to go.”

The day before this anniversary, EW gave me a passionate kiss before leaving for his captain’s job, leaned back, looked deep into my eyes and said, “I’m thinking of taking you up on that option.”

Twenty-eight down,  infinity to go.

Thanks for the smiles this morning. And CONGRATS on year 28!!.. We just celebrated year four but we have the same number left as you, forever that is, assuming EW goes for the option. :) Here's to forever!
PS Where are you and what are you're plans for the Fall?
We're in Portsmouth, NH for the summer with Centime in Panama. We hope to go through the canal next season and maybe the South Pacific in 2015 if our luck and wind hold.
FairWinds

You might have made me cry with this one. You two are so lovely together. It is truly a beautiful thing that you have made. Much love, Beth

Congrats on making it work. I have found that being together 24/7 can have its challenges. It's important to have those outlets. Great job and I wish you two the best from here to infinity.