English poet Samuel Taylor Coleridge said in Rime of the Ancient Mariner:
Day after day, day after day,
We stuck, nor breath nor motion;
As idle as a painted ship
Upon a painted ocean. 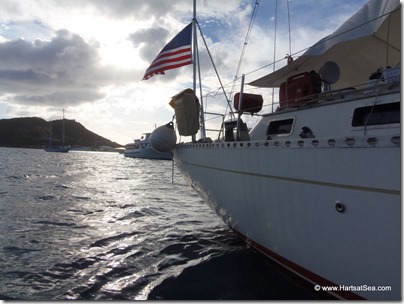 We sit, bobbing with little motion;

As idle as a moored boat

Not sailing on the ocean.

And all aboard did shower;

We drink, we eat, we scour.

Now that Coleridge is rolling in his grave, let’s discuss drinking water.

We do not have a water maker. They are expensive, and when we were outfitting the boat they seemed to be at the top of the high maintenance list for most cruisers. I make mistakes, but I’m no fool and was not about to add to EW’s maintenance tasks.

We have never had a problem getting water along our way, and only once did I find the taste objectionable. La Luna holds 200 gallons of water, and EW did install a Seagull water filter for our drinking water. We have never been ill, and the water tastes fine. It’s our cheapest provisioning item. We use about 50 gallons a WEEK*, and for over two years, we would lift the anchor and head into the dock once a month for water.

As an older sailboat, La Luna has very small fill hoses. If we run the incoming water at full force it will simply overflow, so it takes about an hour to fill both tanks once we are on the dock. Add to that the time to raise the anchor, dock, and get back out to the anchorage and reset, and you can figure one morning is totally shot. 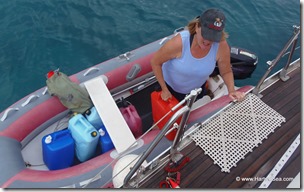 This winter, I noticed that friends and experienced sailors Eric and Lynn on S/V Amarula fill their tanks more often by using jerry cans. At first I thought that would be too incredibly labor intensive, but now EW and I have joined their ranks. Once a week, when both of us are home, one of us – usually me – scoots into Crown Bay Marina with 4 five-gallon tanks, and brings water back to the boat. If we make three runs one week and four the next, we can keep the tanks full quite easily. We probably still spend four hours a month on the process, but at one hour a week, the task seems less onerous.

And for some reason, I don’t worry as much about the amount of water we use, even though I’m not using any more or less than we did before. We have water to shower, clean the boat, and drink. The Ancient Mariner has nothing on us. 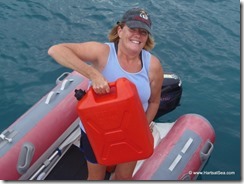 * This edit brought to you by two readers/commenters below -- Lynn and Kirk. Clearly I posted this before EW saw it. We use 50 gallons a WEEK not 50 gallons a month as was originally posted. Sorry about that.

50 gallons a week? I'm really going to have to buckle down. I use that in a week. But only because I can. We only have a 70 gallon tank so we may have to explore alternative options.