I’m am the first definition of klutz:

2. a stupid or inept person; blockhead.

My mom used to say (frequently), “Barbara, you can hit all four sides of a door when you’re going through.” She was right. This was not some version of child abuse and didn’t hurt my ego; it was just the truth. I’ve always had random bruises, and usually can’t remember receiving them. (Fran, one of my cousins, is also afflicted. As is my sister, Pat. Her husband was her boss when they met. Jerry said he married her so that she would have to change departments and stop breaking things in his.)

Back in high school, I had applied to work as a cashier at Bud’s Shop ‘n Save in Newport, Maine. Danny, the manager at the time, saw me in the store one day and said, “Here! Catch!” tossing me a raw egg. To my and my parents’ amazement, I caught it without breaking it. Danny thought that qualified as a test to see if I was coordinated and hired me. I worked for them part-time through the rest of high school and my first year of college. It was a great job and they liked my work. However, I broke many bottles of soda, banged my fingers a lot, and generally exhibited my usual klutziness. Danny swore that “You lied in your interview.”

Most boaters get bangs and bumps, and other women boaters in particular have mentioned their myriad of bruises. It doesn’t help that I’m a blue-eyed blond and bruise easily. My boating bruises appeared more frequently earlier in our marriage when we had a smaller sailboat, and there was that one time on our honeymoon when EW was accused of spousal abuse, but for the most part, it’s the boat that suffers when my klutz happens.

This week, as I was getting ready for work, I somehow stumbled on the way into the aft head. Now there is a lip one has to step over, but I’ve lived aboard this boat since 2002, so one would think that walking around would be automatic. It usually is.

Anyway, I stubbed three toes, and made an arm-wind-milling hard landing on the toilet seat, causing it to break off the head.  I left the lid there, askew, and went off to work, forgetting all about it even when my toes hurt a bit later in the day.

Until EW and I returned home and he went into the aft head.

I wondered, just for the barest of moments, what had upset EW, and then remembered and said, “Oh. I meant to tell you, I fell into the head this morning and broke the seat.”

“Yes, but it will take some time and tools I’m not doing it until my day off.” 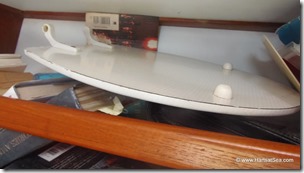 “OK. I’m fine by the way. Bruised my toes though.”

That’s why EW has the toilet lid on his side of the bed. (I disinfected it as soon as I saw it there. Ugh. Men!)

This morning, I found  an article on the web about a TODAY Show report by Savannah Guthrie, who is also a klutz. We are not alone, and it’s not our fault:

Guthrie reported on the science of clumsiness this morning, citing a 2007 Dutch report that essentially found that natural-born walking disasters really do exist – one out of every 29 people is 50 percent more likely to do something clumsy than regular, non-accident-prone people.

Today, Dr. Buz Swanik and his team of engineers at the University of Delaware are investigating what’s happening in the brains of clumsy people.

“They can’t create a plan for what’s going to happen next, and it could be within one-tenth or two-tenths of a second, and you’re exposed, to whatever is around you that could hurt you,” Swanik told TODAY.

TODAY host Savannah Guthrie and I? We are like this: 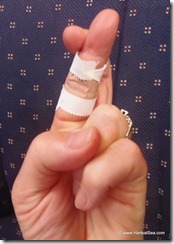 It's nice to know there are more out there like me! (Misery loves company) and how many times have I hit my head on the sliding hatch! I know it's there, yet I continue to hit my head at full force. And for the bruises, I could play connect the dots if I wanted to. Klutz is my middle name.

What is it with toes and boats? I think the little line holders along our deck just wait til I am walking by and reach out and wack my toes whenver possible. Hope you heal quickly!

This reminds me of how your fingers looked at Music Camp back when we were in Jr. High!!!!!

Kathy -- I almost put that in the post! I think every finger sported a band-aid for two full weeks! Hugs!

Lynn and Dora -- I think all of us go through this on boats and it never stops. I just go through it on shore, too. Ugh! Hugs!

I really like what you guys arre usualy up too. This type of clever work annd reporting! Keep up the awesome works guys I've incorporated you guys to my personal blogroll.

Excellent web site. Lots of helpful info here. I'm sending it to several friends ans additionally sharing in delicious. And obviously, thank you on your effort!