From Wikipedia, the free encyclopedia

Dorian /ˈdɔəriən/ is a name of Greek origin meaning "from Doris", or alternatively from the Gaelic name Doireann meaning "tempestuous weather".[1] It was probably created by Oscar Wilde for the main character in his The Picture of Dorian Gray, after whom the syndrome Dorian Gray syndrome.[2] It is used mainly for men, but is also used occasionally for women. It is the name of a long-running female soap opera character, Dorian Cramer, on the ABC soap opera One Life to Live.

Hmmm. So we have tempestuous weather, Oscar Wilde, and soap operas. Kind of appropriate since Dorian was tempestuous only for a short while and simply disappeared.

Here’s what I like about early hurricane season in St. Thomas:

These storms give us a chance to learn the area, sample various weather forecast options, and discuss our storm plans.  We follow a lot of weather sources, but tend to focus on Chris Parker’s 7AM SSB broadcast and Weather Underground. On the 25th, Weather Underground showed the historical tracks of storms that were born in June and July in the same area in which Dorian formed. As you can see, historically we didn’t have much to worry about. 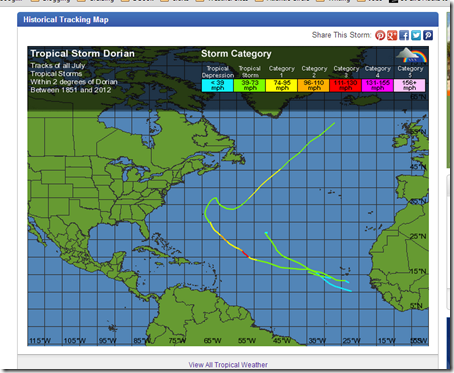 Still, we kept watch – two to three times daily – and listened to Chris Parker every morning. If Dorian hadn’t died out, an option that was mentioned often, he would go north of us, impacting us with some wind and potentially rough seas. We made plans to move into Charlotte Amalie Harbor because when a storm goes to the north, this anchorage can have a very uncomfortable roll. At 5AM on Saturday, they were talking about Dorian weakening. If he remained alive, he was definitely passing close enough to our north to have a bit of impact. 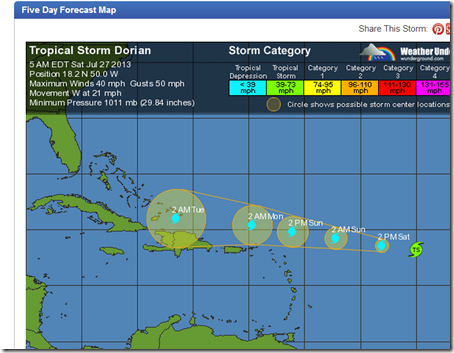 Since EW was scheduled to work on Sunday, we would move on Saturday night after he got out of work. I was aboard La Luna all day and had planned to pull some beef out of the freezer and make an Asian – and fairly healthy  -- sauté. However, it was cooler than normal that morning, and I thought it might be blustery and raining by the time we moved, and the originally planned meal could not be cooked until after we anchored, meaning we wouldn’t eat until late.

I’ve been reading some British mysteries lately and the Scotland Yard types keep stopping into pubs for lunch where steak pie is often the meal of choice. I looked up a few recipes, altered them, combined them, and vowed not to use the gas for the 3-4 hours of total cooking time. Why would anyone need to bake a pie for 2 hours – particularly after browning the ingredients and stewing everything on the stove top for over an hour?

I figured I could start cooking at 5, have the pie in the oven by 6 when EW arrived home, and it would be ready to eat once we had anchored.

In the meantime, Dorian began to die like daytime soaps. By the time EW arrived home, we had both decided that it made no sense to move. 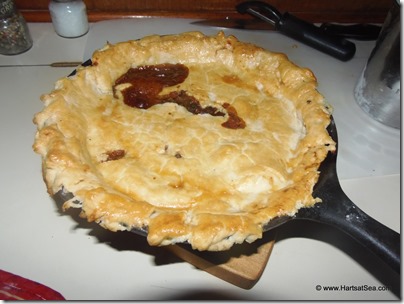 Still, EW was so delighted with the steak pie, that I actually sat down at the laptop and wrote out my recipe. Before we take off next year, I’ll make a batch of this and freeze it, making the crust and baking it as we cross the Atlantic. 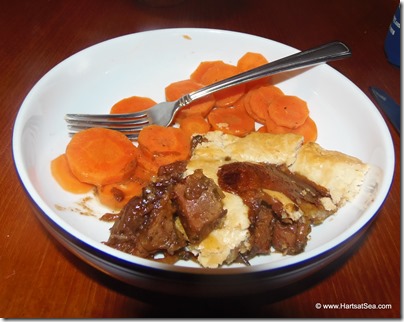 Thanks, Dorian – for being my gourmet muse this week, and for dying out at sea. We’ll remember you fondly.

1 cup beef stock - a bit more if you like a moister steak pie.

1. cube steak, pour half can of beer on it, add salt and pepper and marinate for a bit

1.a. Sip the rest of the beer while cooking.

2. Slice the onion and sauté in a bit of hot oil until gold and brown. Take the time to cook it well. Stir often and stop only when brown bits start clinging to the pan.

3. Remove onion, add a bit of oil to the pan and reheat. Drain the beef, reserving the liquid. Wipe the cubes to dry them, dust with seasoned flour and brown in pan.

4. Add onions, parsley, thyme, salt and pepper to the browned beef. Mix reserved beer into broth and add to pan. Cook on top of stove for about 15 minutes.

5. Make pie crust. I used 1 cup flour, 1 tsp. salt, 1/3 cup shortening, and water to make a dough. Do all the normal cutting in of the shortening, rolling, etc., reserving a bit of dough to edge the pan.

6. Pour beef mixture into pie pan or small iron skillet. Edge pan/skillet with small bit of dough, place dough topping on top of the dough edge and pinch the edges together. Brush entire top of dough with beaten egg. Make a slit to let steam escape.