This is not my opinion. Oh no. A tall, handsome young man declared that I was “dope” and took my photo.

This is not my photo.

I’ve been working at the Rum Cart located at the Havensight Mall in St. Thomas. This job is dope and I’ll tell you more about it in a subsequent post.

I only work when there’s a cruise ship at the dock, and 99 percent of my “customers” are passengers. This young man was on vacation with his family, and roaming around the mall with a buddy or cousin. They were over 18, so they stopped at the rum cart where I hand out free samples of Cruzan® Rum.

As I handed him his first little sample, I peered at his sunglasses and asked, “Are those spikes on your sunglasses?”

He smiled as if I had complimented his first born – “Yeah. Aren’t they dope?”

And with that, he whipped his sunglasses off and urged me to try them on. So I did.

And he laughed, and declared that I was “dope”.

When he asked if he could take a photo, I said, “Of course.”

He got out his iPad and padded a couple of pics, then kindly took my phone and took one for me. 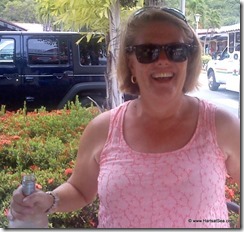 You really can’t see the spikes, so I tried a super close-up.

Then I went to the web, Googled “sunglasses with spikes” and found a plethora of images. The ones below are more like the ones I wore. Except “mine” had spikes actually on the lenses in the lower outside corners.

I also Googled “dope”. According to Urban Dictionary, it does mean cool:

1. Yo foo that new stereo system is dope!
2. Yo man you got some dope?