Chantal \ch(an)-tal\ as a girl's name is pronounced shahn-TAL. It is of Old French origin, and the meaning of Chantal is "stone". From "cantal". It was originally given in honour of Saint Jeanne-Françoise de Chantal (17th-century), a woman of great piety who adopted a strict religious life and founded an order of nuns, the Vistandines, devoted at first to charity and later to teaching and devotion to Jesus. The name has come to be associated with French "chant" meaning "song".
Read more at: http://www.thinkbabynames.com/meaning/0/Chantal#Ei4BtY7wwGrM0Kwp.99

So we have “stone” as in “sinking like a”; and “great piety” as in “pray for deliverance”; and “song” as in “And Windy has stormy eyes”.

Chantal as of 5:00 AM Monday, July 8. Chantal is far right, everything else is conjecture. 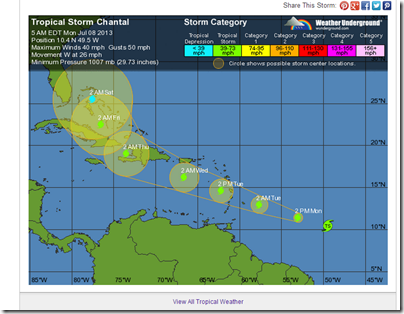 Chantal sashayed across the Atlantic creating all sorts of on-line bruhaha, the best and most helpful being Dr. Jeff Masters’ Wonderblog:

Forecast for 95L Posted by: Dr. Jeff Masters, 4:39 PM GMT on July 07, 2013
The 8 am EDT Sunday forecast from the SHIPS model predicted that 95L would experience low to moderate shear through Tuesday morning as it headed west to west-northwest at 20 - 25 mph. The disturbance should arrive in the Lesser Antilles Islands on Tuesday, and affect the Dominican Republic by Wednesday night. A band a strong upper-level winds … blah blah blah “weather speak” … In their 8 am EDT July 7 Tropical Weather Outlook, NHC gave the disturbance a 40% chance of developing into a tropical depression or tropical storm by Tuesday. I put these odds higher, at 70%. Climatology argues against 95L becoming a tropical depression east of the Lesser Antilles Islands; there have been only 20 July tropical depressions that have formed east of the Lesser Antilles since 1851, an average of one tropical cyclone every eight years.

Dr. Jeff was right, and Chantal did form and was named. In subsequent posts he made us nervous by stating that early onset tropical storms – those that form in July – indicate an active season. 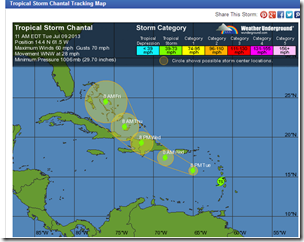 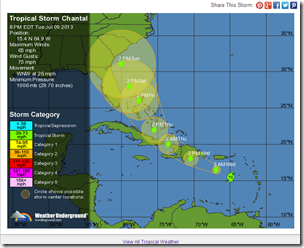 EW and I watched websites, made plans, and had one of those married couple discussions about what we had been told prior to the season by our friends Carl and Carrie on S/V La Creole and Jaime and Keith on S/V Kookaburra. One of us was right. It rapidly became apparent that Chantal was going to come to our south and that St. Thomas would not take a direct hit.

Here are some of the more important things we learned from those friends who have been here for a couple of hurricane seasons:

Here are things we learned:

Here’s something that is very different than what we dealt with in Maine: A direct hit from a hurricane is inherently more dangerous than our time on the dock in the winter, and we have more friends to worry about down here and more time to worry about them.

In Maine, northeasters come with less warning, and we don’t feel guilty or anxious if it by-passes the coast and hits inland towns. If you live in Maine, you will get northeasters. Deal with it. It’s easier to deal with in a home than on a boat, I had no problem wishing a storm would move away from us and therefore toward friends and family elsewhere in Maine. They knew how to handle it and their abodes weren’t floating.

In the Caribbean, Facebook was rife with comments by sailors from Grenada to Bequia, from St. Lucia to the USVI. None of us wanted a direct hit, but all of us worried about our sailing buddies and friends on shore in the other islands. If it turns north to miss Grenada that’s good. If it devastates Guadeloupe and Martinique that’s bad. I didn’t want to meet hurricane Chantal here in St. Thomas, but didn’t want Brittany, Peter, Lynn, Debbie, Dingis, or other friends to meet her at full force either.

In the end, Jeff Masters was right. Chantal was marching along too fast to form into a hurricane. As I said Wednesday morning on Facebook: 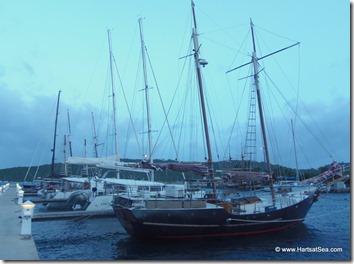 We readied La Luna, then met Chris and Frank, EW’s co-workers, and helped them tie up the two Marriott ferries at Crown Bay. And then, we joined Chris for dinner at Tickles. Afterward. we slept through the night, and didn’t even get the massive rain they warned us about. EW has gone to work. I don’t have to because the X’d out port resulted in a second cruise ship cancellation. So I will write this post, sew, and restore stuff to the deck with the wind dies down.

We have no regrets about doing more than turned out to be necessary. That is the price we agreed to pay when we decided to stay here this season. I have asked to be included in an email list that will let us know when the port has been X’d out. I’ll continue to scour various Internet weather sites when a storm is brewing and we’ll continue to make sure La Luna and we are safe.

This is a stupid headline. The article has no news and, when posted, Chantal hadn't made landfall in the Caribbean. Hard to "wreak havoc" before you arrive.

Not yet a hurricane, but Chantal still wreaks havoc in Caribbean

The National Oceanic and Atmospheric Administration satellite image from Monday shows Tropical Storm Chantal off the coast of Brazil.

Fast-moving Tropical Storm Chantal raced toward the small islands of the Lesser Antilles on Tuesday, with residents of St. Lucia shuttering schools and preparing to close the island's two airports as it neared.

The storm was centered about 45 miles north-northwest of Barbados around 8 a.m. EDT Tuesday, the U.S. National Hurricane Center in Miami said. The storm had maximum sustained winds near 50 mph, and was moving west-northwest at 26 mph.

Tropical storm warnings are now also in effect for Puerto Rico, where the storm is predicted to hit late Tuesday night.

The storm may grow to hurricane strength when it reaches the island of Hispaniola, consisting of the Dominican Republic and Haiti, on Wednesday, according to the Hurricane Center.

Residents of the southeastern United States will have to pay attention to the storm, too, as current forecasts predict the storm moving north towards the Florida coast early next week.

However, current weather conditions in addition to the storm's predicted contact with land in the Caribbean, could slow Chantal before it hits the U.S. coast, the Weather Channel reports.

Chantal is the first storm of what is expected to be a busy hurricane season, which begins June 1st and lasts through the end of November.

I sincerely hope that Chantal wreaks no havoc in Hispaniola, Cuba, or Florida, either. Keep moving forward, girl. Walk that mad off!