*Some of you may be shocked to realized that IRL (In Real Life) my husband and captain goes by “Stew”, not “EW”  -- though he answers to both. On the job, he’s definitely Captain Stew. 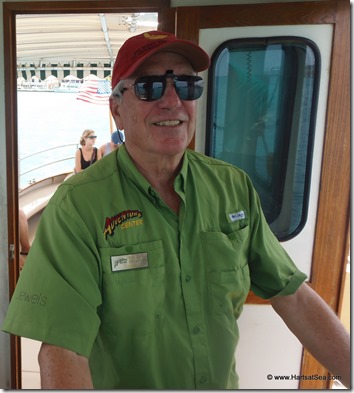 He found out about the job through cruising friends as the cruisers’ grapevine in St. Thomas is an active source of information. There are many jobs for captains down here. Most of them are larger vessels with crew: catamarans, pirate ships, or large mono-hulls, that take  40-80 folks out for snorkeling day trips, sunset cruises, or weddings. EW had the choice of skippering a 60-foot sail boat out of Redhook, skippering a powered dive charter boat, or skippering the M/V Morning Star for The Adventure Center that operates out of the Marriott in Charlotte Amalie Harbor. 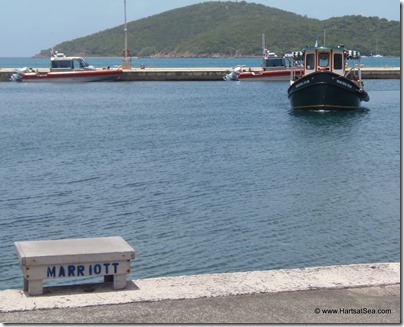 The Morning Star and her partner, the Evening Star, are covered launches, that make the run from the Marriot Hotel to downtown Charlotte Amalie every half hour from 8:30 AM to 5:30 PM. These cute little boats (EW will not like the phrase “cute little boat”) carry up to 22 passengers on a 20-minute slow chug to and from town. Along the way Captain Stew regales his customers with stories about the islands, architecture, and shops; lets kids and kids-at-heart take the wheel; and occasionally mentions our lifestyle and cruising status. 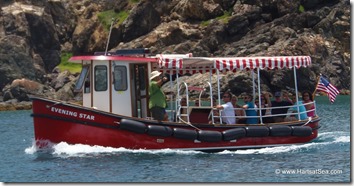 You who don’t know me have probably surmised that I’m fairly extroverted and may assume I married my opposite. Not so. EW enjoys telling stories almost as much as I do. (Fortunately we also enjoy listening to each other.) He played tourist for a day or two before taking the job, learned from Keith, his predecessor, and picked up a few things on his own in order to make the trip interesting to his passengers. The boat putts along at 5 knots (Lunah Landah, with a 9.8 horsepower outboard beats the Morning Star any day of the week.) giving EW plenty of time to interact with his passengers. 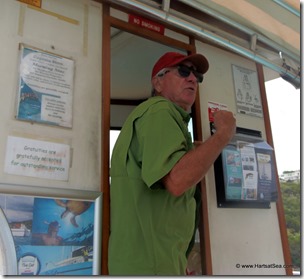 He loves meeting folks from all over, making them laugh, and helping them enjoy their vacations. Late one day, four guests wanted photos with Captain Stew, and a gentleman who was going on the run to town had to wait on the dock for a moment. Once the four were on their way, EW apologized to the gentleman, who brushed that aside. Turns out he was the interim manager for Marriott, a retired hotel executive who took over various locations for a few months until a new manager is hired and gets up to speed. He said to EW.”Do you have any idea how rare – and what a compliment it is that those guys wanted your photo after knowing you for 20 minutes? I’ve been around this business for a while, and you clearly made a great impression on a short trip. I’ll make sure to tell Scott and Mark at the Adventure Center.” EW is still beaming at that compliment. 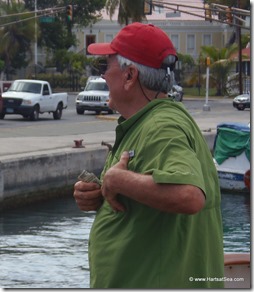 He’s paid an hourly wage, and receives tips from his passengers – most of the time. This working for tips is a humbling thing to do when you are sixty-something. EW has developed a “Tip Zen”, being grateful for those he receives and not worrying about those who don’t tip.

The drunk young man who got seasick on the short trip, and had to “use the bucket” left a quarter - we don’t like him.  Nor are we impressed with the moneyed young things with kids in carriages who entrust EW to carry their precious cargo on and off the boat and barely offer a “thank you”. On the other hand, it is the practice of EW’s company that the day crew in the office or on some of the other vessels can take a ride to work on the ferry for free. They nearly always offer a tip. They know what it’s like.

I have to confess, that while I inevitably tip 20% at a restaurant, I never knew how/what to tip in these situations. The captains are thrilled if they receive a dollar per passenger. That’s not much, but it adds up to a good day on the water and EW and I will remember that when we are once again real cruisers. 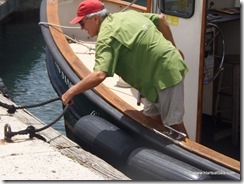 In the meantime, five days a week, EW dons his green shirt and name badge and heads over to the Marriott to power up Morning Star and get her into the dock for the first run. It’s a full day of constant motion and constant customer interaction. He loves it.

But he’s still really looking forward to being “just a cruiser” once again. 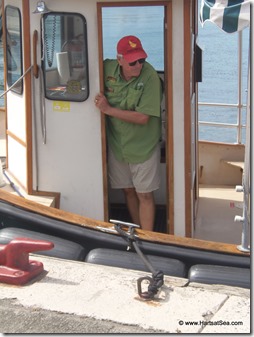 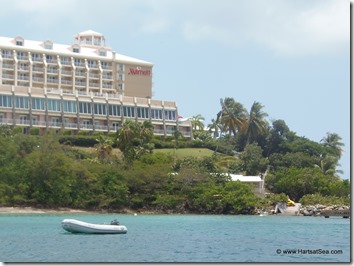 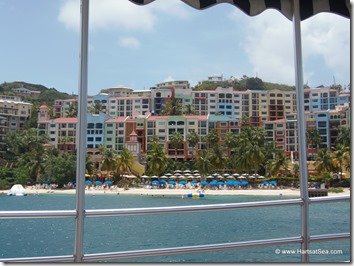 Above, EW docking at town. Above right, the Marriott Hotel. At right, The time shares at The Cove. EW picks up and drops off at both locations.