One Bad Battery WILL Spoil the Whole Bunch, De'ah 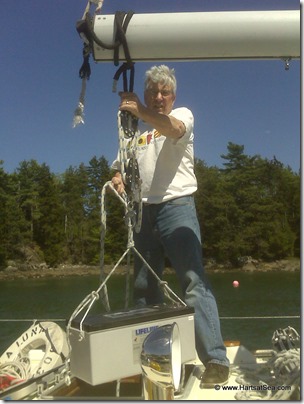 Back in Maine, my wise in-house electrician, with help from the real marine electrician at the boatyard, installed 6 batteries, the last – or first – was a starter battery wired separately from the main bank. In fact, the original starter battery was just as big and expensive as the others, but when one battery failed in Grenada, EW pulled it, replaced it with the starter battery, and replaced the starter battery with a smaller, cheaper one. Sometime between Trinidad and April, EW took another bad battery out of the system, leaving us with four infected ones to keep everything running.

At left, EW is removing our original Lifeline batteries and replacing them with a different brand. The Lifelines were 5 years old and he didn’t want to head to the Caribbean with bad batteries. Yeah.

We left Maine in the fall of 2010 and have had battery problems for at least the past year. Finally, they started falling like dominoes and we had to get new ones.

At this point, EW went into research mode. What batteries should he purchase? What batteries could we afford? How will we get them here? Should we take the boat to St. Maartin and buy batteries there? Or should be go to Puerto Rico? Each month he has three days in a row off and we were actually considering that kind of a “vacation” – leaving here in the evening, sailing overnight to Farjardo, having the batteries delivered to the dock, installing them and sailing back. Oh joy.

I mostly stayed out of it because .. well, because I could. My role was to be sounding board, supportive, and helpful, and to conserve power. During the last few weeks of this saga, we had turned off the Cool Blue refrigeration system and were charging the engine driven system twice a day. The freezer didn't freeze, but it kept milk for a few days. In the end, EW was able to make a case for spending money on five 4D Lifeline AGM batteries. He had decided against the marathon sail/battery installation in Puerto Rico, and the cost of shipping the slightly less regarded batteries from PR to here was nearly three times the cost of shipping the highly coveted Lifeline batteries from Miami to here, justifying the more expensive batteries.

I was OK with the more expensive batteries because I’m a power freak. Seriously, I do conserve as much as possible, I just don’t want to lose batteries when we’re crossing an ocean. I’m that kind of power freak.

EW’s machinations took on the essence of that tired line from "pick any sitcom” about the woman shopping for shoes and justifying them by insisting that she is saving money because they were “on sale”. Buying batteries isn’t about saving money. That is partly what got us here. Since these new batteries are like the first ones we installed on La Luna  and they never caused any problems, and these new ones should actually last 5 – 7 years, then  this all sounds good to me.

Of course choosing the batteries, paying for them and getting them here was the prologue to the Main Event: Installing the Batteries.

With EW working five days a week, we essentially had a day and a half to:

Yeah, doing all of that in Farjado and then sailing back would have been an excellent adventure. Not.

Tune in for the next installment when we find out how many cruisers it takes to install five heavy batteries. 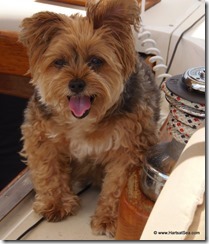 We replaced the battery bank on a tall ship I worked on and it was hell! There were 12 and it took until midnight (all without power during, of course). Since I was "dating" the engineer (ahem) I stayed up as the flashlight holder with him and the Captain. Yuck. Hope it went smoothly (ha).

My previous Lifelines lasted 8 years, the current 3 year olds are still going strong. Make sure you equalize them once a month, that will double or triple their life (from Lifeline tech support).