There are cruisers who are crafty and artistic. They make and sell jewelry, note cards, carved gourds, and rope items; Vicky on Foxy even makes quilts on board. I’m not at their level, but I’ve created a few things that have been helpful on the boat. Friends and former neighbors, Chuck and Diane, sailed around the world and invited us to visit when they traversed the Panama Canal. While aboard S/V Bear I noticed that she had made a sunglasses holder out of heavy plastic needlepoint canvas, and filed that idea away for the future.

We didn’t need a sunglasses holder, but I’ve since thought of a few ways that needlepoint canvas can work for us. These are not cute, colorful, yarn-covered tchotchkes. A quick search on the Internet shows a surprising number of dubious items one can make and give to unsuspecting friends and relatives. My projects are strictly utilitarian and leave the canvas naked – and washable. Instead of yarn, Diane used gimp to lace the pieces together. 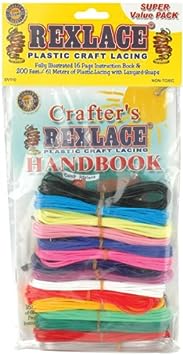 Do you remember gimp? EW had “never heard of it,” proving he wasn’t a Girl Scout.

At Camp Natarswi in Millinocket, Maine, I often had to choose between candy or gimp when spending my miniscule daily camp store budget.Gimp was vitally important in creating bracelets, key rings, or other items for friends and family. Candy was just vitally important.

La Luna was built in 1985 and is a monohull. Both her age and her style will

indicate that she may not have the galley storage found in similar-sized newer boats or multi-hulls. In fact, the only drawers I have for the galley are at the other end of the salon, underneath a small book shelf. They are also small – so small that no commercial ready-made dividers would fit.

When we first moved aboard, I spent a lot of money purchasing home and marine storage items. Some proved to be worth their weight in teak, others did not.  The cut-to-fit plastic drawer dividers with sticky pads did not stay stuck for more than a year, but I kept them in use for a while longer with gorilla glue and other products. (EW and I agreed that 5200 would not be a good idea – though I was tempted.)

You can still get gimp at craft shops in the States and Amazon.com, but I haven’t been able to find it down islands at all. As you can see, above, this manufacturer calls it “Rexlace”, but if you Google “gimp” you can find it. At least one store in St. Thomas claims to stock it – sometimes. I’ve also found that most of the craft and sewing stores in the Caribbean don’t offer the stiffest plastic canvas, so if you want to make these items and you’re already in the Caribbean, I’d suggest adding them to your next guest’s shopping list. It won’t take up much room in her duffle.

Here are my two plastic canvas projects. If you have boat craft ideas with plastic canvas or other materials, please share them in comments, or email me about doing a guest post. 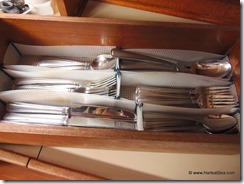 1. Measure your drawer and the items you want to store. As you can see, our table knives and teaspoons dictated how I arranged the drawer. The interior of these drawers is just over 6.5 inches wide, so I decided the holders could be about 2 inches wide,which would allow me a bit of wiggle room. Except for the knives and teaspoons, I simply split the length in half, again, reducing the final lengths to slightly less than half of the length of the drawer to allow for the width of the plastic.

2. Now, add an even amount to each of the four sides. I added two inches for a rise of just less than that. If the dividers are too tall, it would be harder to remove the silverware. Cut rectangles from the plastic canvas in the appropriate width and length. The photo with the sacrificial cardboard shows a one-inch rise.

3. Mark the fold/cut lines. for my drawers, two inches from each outside edge. Then cut the marked square out of each corner. 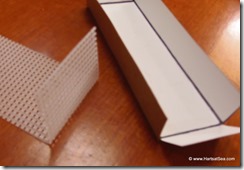 4. Here’s the cool part: While the cardboard I’ve used for these photos holds a crease, the plastic canvas does not … until you use fire. Pinch the canvas along the lines and run it along a flame for a few seconds. Hold, and release. Viola! A fold.

5. Now, simply “sew” the gimp along each corner and you have removable, washable, custom drawer dividers. 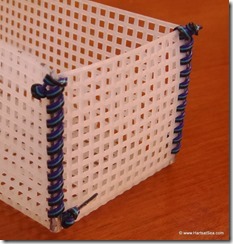 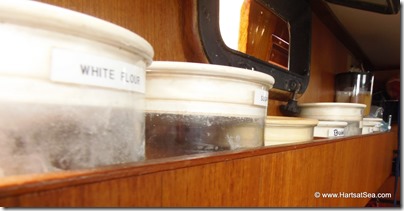 I discovered Click Clack canisters before we moved aboard,and when my sister Pat came to visit our future abode, she helped me measure the canisters to fit. Somehow, I broke the pasta container last year, but all of the others are still locking in freshness and locking out bugs. I love that! Click Clack canisters are definitely on my “Good Product” list. 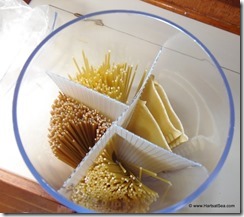 I purchased a new pasta keeper and then looked at the three different pastas I had to keep. I made a quick and easy pasta divider.

I cut each of them half way up the middle. and slipped them together creating a cross and four compartments. STOP

Then I did it all over again because I had cut them both up from the bottom. Cut one half way up from the bottom and the other half way down from the top. Also, make sure that the finished height is short enough to clear the cover, which does take up over an inch at the top of the container.

Insert dividers and pasta. NOTE: This isn’t a perfect divide, but it works – mostly. I will have pasta creep, but I live on a boat and don’t have room for multiple pasta containers, so I’ll deal. It’s a small price to pay for living on our boat in the Caribbean. Woot!

NOTE:  For some good ideas – and some strange ones – check out this. I found the hair clip/cord keepers to be particularly useful. 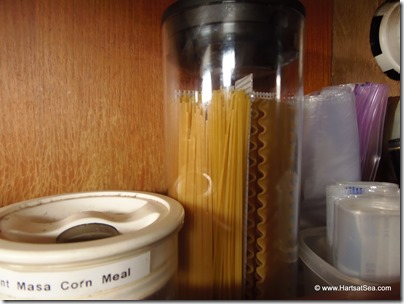 Posted at 07:06 AM in Boat Projects, Maintenance, and Parts, Galley Tips and Recipes | Permalink | Comments (1)

A cruiser-crafter with a labelmaker. Are we twins? ;) Thanks for sharing!