Home Archives Profile Subscribe
If EW Had a Blog
Looking Back 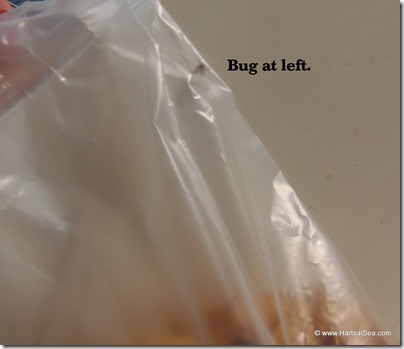 When we left Maine, I vowed to stop our dependence on processed cereals. They are hard to keep fresh and whole, take up a lot of space, and are very welcoming to critters. I do not welcome critters unless they are furry, have four legs, and bark.

In a – mostly successful – attempt to keep cockroaches and flour worms/moths off La Luna we have “never” brought cardboard aboard the boat – well almost never – and “always” store any tasty morsel for bugs in Tupperware, Lock ‘n Lock, screw top plastic jar, or Click Clack container.

The first time I slacked on the rules was in Trinidad when we opted to purchase copious amounts of some of our favorite beverages to take advantage of their prices before we came back to the USVI. The cardboard beer cases were left at the dock, but the boxed wine came aboard boxed. Shortly thereafter, I saw a cockroach.

In theory, if you see just one, you are not “infested”. If you see three, you have thousands on board. I only saw one, but I still made and set out roach cookies to prevent an infestation. Months later, no more roaches. Whew!

Since we’ve been in St. Thomas EW has made a new acquaintance with boxed cereal and I’ve generally kept him stocked in Raisin Bran. The box does not come aboard, since everything we’ve read indicates that bugs just love to lay their eggs in the glue. After the cockroach sighting, I’m even more rabid about the box rule and often remove the bag of cereal and throw away the box in the store’s outside trash bin.

The other morning, EW pulled out his beloved bag of RB, of which he had only had one serving. Gulp. His eyes were immediately drawn to a moth flitting about in the bag. The bag was promptly stuffed into a plastic garbage bag, which was sealed and thrown into the dinghy.

EW had peanut butter and toast for breakfast and I examined and cleaned the cupboards, particularly because we’d gotten lax and the cereal had been closed with a clip, not locked into a plastic container. No other moths. No –ugh- worms, no cobwebby things. I’ve checked everything from cereal to crackers, flour, spaghetti, cookies – no bugs at all. We can only imagine that the one bug was in the bag at the store and didn’t have a chance to infect us. Having read this article about their life cycle,  I’ll be checking weekly in case I missed something.

Here’s what I didn’t know: Those suckers CAN and DO chew through plastic. Still, it’s not their first choice. Since I have no evidence of any infestation, I think these prevention methods have worked quite well so far.

Some of the more scientific articles sniff at the use of bay leaves. I think it helps and I’m going to continue to do it.  I keep all peanut butter jars, rice jars, and other plastic screw top jars to store pantry items. In addition, I love, love, love my Click Clack canisters. I’ve had most of them since we moved aboard in 2002 and only one has broken.

A few days after EW’s moth incident, I went back to Pueblo – not the cleanest of groceries, but the closest – and again purchased a box of raisin bran. While in the store, I opened the box, shook up the contents and checked for moths. Seeing none, I purchased it, tossing the box into the dumpster after checking out. 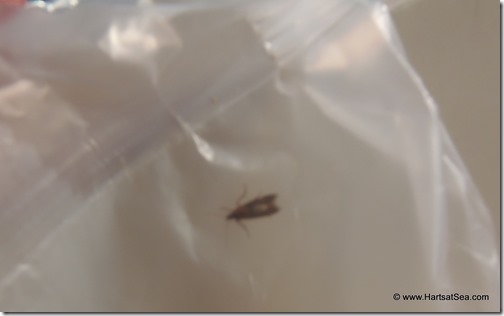 The Blog Gods must have wanted the photo-not-taken when EW found a bug, because once I got the groceries into the cockpit, this little beauty was flitting around in the sealed bag. Back to Pueblo where the manager apologized and cheerfully made a refund, saying, “They like the raisins. And it’s warm here so the egg hatched.” EW will not be getting any more processed cereal with raisins.

He’s OK with that. Evidently the only thing worse than a bug in an unopened bag of cereal, is one in a bag from which you have eaten. 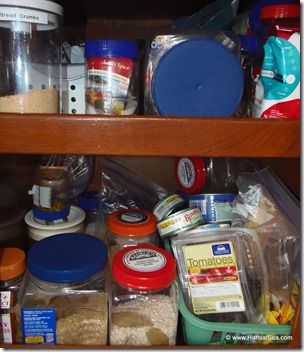 Tell EW it could be worse...I once got up early and made myself a bowl of raisin bran, poured milk over it, sat down and ate. Then I hear, "UGGG! The cereral is full of bugs!" I look down and Yep, they were floating in the milk, of my half eaten bowl of cereal. I now pay better attention to my food when I am half awake in the mornings. :)

We just got back on the boat and the first thing I did was to check our cereal bags that we had left behind. Bug free.......this time.