Home Archives Profile Subscribe
Shopping is Easy. Getting Stuff to the Boat, Not so Much
One Bad Battery WILL Spoil the Whole Bunch, De'ah

If you have a boat – or renovated a home – you are familiar with Project Creep. When we were renovating the home, I called it the “As long as were doing this … let’s also do that” mentality. The biggest project creep for the home went thusly: We needed to have the roof shingled – so we decided to do the siding, too – which led to have all new windows installed. Now that’s expensive Project Creep.

Part Creep is just as inevitable, but more stealthy than Project Creep. Back at the house, I was often unaware of Part Creep because we had a shed, full basement, and attic and EW could hide a lot of stuff. On the boat, not so much.

When we bought her, La Luna had been owned by a sailor who didn’t sail as much as he liked, but who purchased every spare part and doodad he wanted. The boatyard workers were in awe of the boxes of things removed before the sale and had to stack those boxes on a pallet and use a forklift to get them off the landlocked boat. Still, on the day we closed I went aboard with a friend and inventoried the hundreds of spare parts and tools that had been generously left behind. 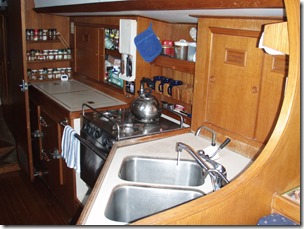 I took one look at our galley and its two small cupboards and informed EW that if he wanted to eat I was appropriating the port side of the main salon for food and dish storage. He likes to eat and readily agreed. A few years later, he humbly requested one-third of the under seat storage for his heavy tools. I graciously relinquished that space – taking the aft cupboard behind the dining seat in return -- and he ultimately remade the port lift top to open for each of the three sections, making my life a lot easier. 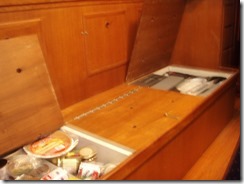 More recently, when he finally decided to make the unused AC/DC fridge into a storage compartment I had to remind him that I would need him to give me some storage space for the vacuum bagger and bags that had been stored in the fridge for the past three years. “No problem,” he said, giving me the center cupboard behind the dining seat. 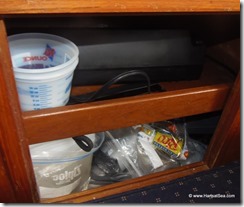 So imagine my surprise when I delved into that cupboard this week and found – sitting in plain sight – a small stack of paint mixing containers.

“This is not your space,” I exclaimed.

“Since when?” EW asked in a tone of voice that implied, “Is too!”

“Since you gave me this spot to make up for the fridge storage space.”

I tossed him the containers, which he then stored with all their little friends in the forward head.

I am the Queen of Project Creep, but I will not tolerate Part Creep. Those of you who generate Part Creep may notice that I have not filled this cupboard , and may even suggest that I share it with EW. Not going to happen. When we cross the Atlantic this cupboard will be full to the brim, so in the meantime, I will continue to defend “my” space.

EW, you are on notice!

Hi Barbara & EW, Am thoroughly enjoying your book. We lived in Europe for 17 years, and sailed in Holland (dry land now that new dikes have been built) crossed the Adriatic several times exploring Communist Yugoslavian coastal regions - lovely; sailed our new sailboat down the English Channel from Holland to Le Havre, France; and finally, succumbing to 1 foot-itis, bought a Northeast 38 in Hamburg and went sailing among the Danish islands for 5 weeks, to find out what problems I had bought and to get them fixed so that we could sail the boat back to the State the following year. Didn't happen.
if you give me an email address I can supply you with more information on sailing life in Europe. Connie Benneck