Home Archives Profile Subscribe
This Blog Needs Work
Living the Dream, But We Still Have to Clean 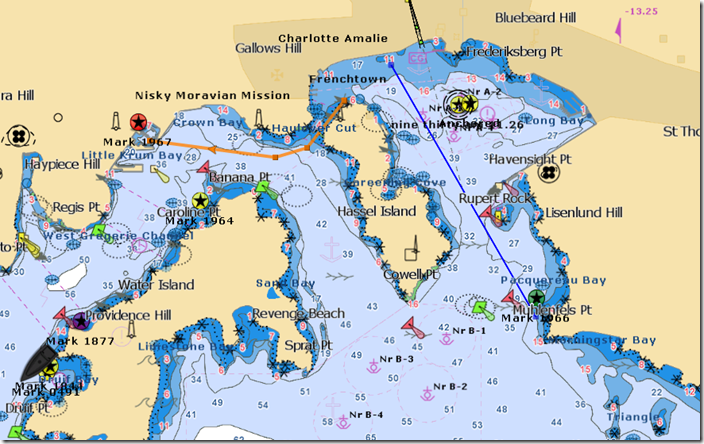 EW has a ten-to-fifteen-minute dinghy ride to and from work each day. Some days I play “suburban wife” and drive him to work so I can have the dinghy. We live at the yellow mark #1964, off the top of water island, and EW works at the green mark across the water from the southern tip of Hassel Island.  If the seas aren’t too lumpy, we take the short cut outside between Water and Hassel Islands, but I more often take the inside passage, going through the cut between Hassel and Frenchtown, which is a more protected, but not necessarily drier route.

On the day in question, shortly before my trip to Maine, I had kissed EW good-by and scooted back around Hassel coming through the cut heading to Crown Bay Marina -- moving right to left along that orange route line -- when I noticed a lot of floating garbage. I’m ashamed to say that I sniffed in distain and powered on through, intent on my own to-do list and mission. A few weeks later, I can’t even remember those all important tasks.

Just as I made the right turn to Crown Bay, I saw another woman in a dinghy, with a lively mid-sized dog on board, picking plastic bottles and bags and Styrofoam lunch containers out of the water. I sped past, then looked around and paused. The area in the bay from the cut at Hassel to the cruise ship dock at Crown Bay was broadly sprinkled with plastic debris, and my rhumb line – that orange route -- ran right through the middle of it. I began my own clean-up campaign.

Now, the thing about starting a project like this is that it’s impossible to stop. Once you tackle a mess and dedicate yourself to cleaning it up, you’ve got to keep going until it’s done. While my unidentified friend and her pup patiently attacked the debris field closer to the source, I committed myself to gathering all of the more broadly spread pieces – those items that had gone past her area.

The next time EW loses his cap from the dinghy, I’m pretty much going to be able to swing around and grab it in one pass. Practice makes perfect and I practiced a lot. I’d choose a small area to attack, count the items in that imaginary circle and scoot around with the dinghy, picking up bottles, yogurt containers, plastic bags, and foam boxes. It was boring, but the weather was nice and I was in the Caribbean. I kept at it until I couldn't see any more debris in my self-designated area and then headed into the dinghy dock at the marina.

At which point, I realized that getting this mess to the garbage container was going to be a challenge. No problem, I’m a boater and boaters help other boaters. Two British gents were enjoying their breakfast on deck. Their boat was tied to the dock and obviously ready for season’s end. Still, one of them knew where the garbage bags were stowed and they passed one down to me, no questions asked. 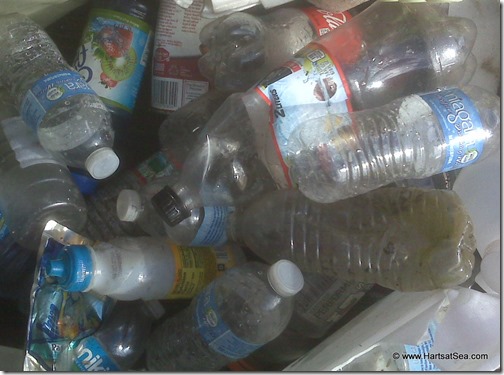 Once Lunah Landah was tied to the dock, I snapped a photo with my trusty old Blackberry, and completely filled a large black garbage bag with plastic items that would be deadly to the marine animals we love to see. I’m still not sure whether my mentor was on her way to take her dog to shore, or on her way back to the boat with a wet, hungry dog. In either case, she definitely had the more arduous task than I, but she never even thought about stopping to clean up the mess. She just did it.

I thank her for the lesson.

Good for you, Barbara! We'll be doing some visits to St Thomas - particularly Peter as he builds his charter business - so hopefully we'll see you there.