We were excited when EW’s brother Howie told us he wanted to come to St. Thomas for a visit. We were also a bit surprised.  Back in Maine, we had subjected Howie to our most uncomfortable Maine sail. In fact – after more than five hours of slogging to windward with the intent to sail from Portland to Rockland, we made a slight detour to the Sebasco Harbor Resort to let a very seasick Howie off the boat.

Now, Howie had been on board once before, for a quiet sail in Casco Bay, with no ill effects, so perhaps we shouldn’t have been surprised that this ex-Marine was willing to sail once again.  In addition – he brought is girlfriend, Mary Jo.  EW’s and Howie’s sister, Dale, had met Mary Jo and liked her, so EW and I were delighted that we were going to get a chance to meet her, too.

It was a lovely visit. EW met them at the airport and rode with them in the taxi back to the marina. From there, we first loaded all of their stuff into the dinghy and sent Howie and Mary Jo to Tickles for a beer or rum punch. Now I know, all of you sailors are rolling your eyes because they brought so much stuff that we had to take it out separately. We often accuse land-lubbers of over packing. However, this was over packing at it’s finest. Howie has a number of hobbies, but is most passionate about making wine. We adore his wine and had long ago finished off the bottles he’d provided at the start of our cruise. Howie paid nearly $100.00 to bring a foot locker filled mostly with wine to the islands for us. I love Howie. 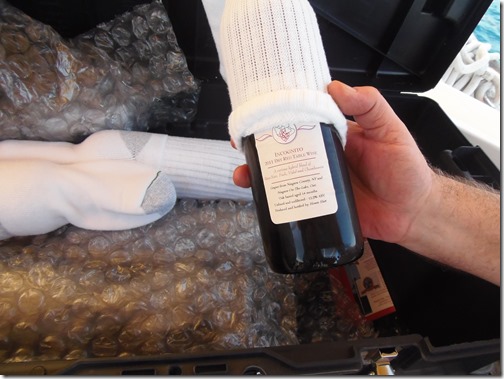 Howie also agreed to be my “personal” shopper and had cheerfully accepted an emailed list for things that I can’t find here, such as vacuum food bags. I really love Howie. 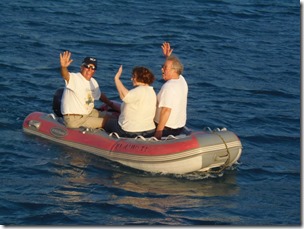 Anyway, despite the order of these photos, EW really did go back to get Howie and Mary Jo prior to checking out the wine. Now, here’s some of the Good Sport part. Mary Jo is essentially terrified of water and she doesn’t swim. This photo in the dinghy is the only time she rode in the dinghy without wearing a life jacket. EW totally forgot – despite being reminded a few hundred times – and Mary Jo was too shy or uncomfortable to insist. She got rid of the shy after that, and we never left the boat without Mary Jo in a life jacket. For some reason, they got into the dinghy facing backwards  -- something none of us do – and that remained their preferred seating method for the trip. It had a little of Driving Miss Daisy about it, but we adapted. 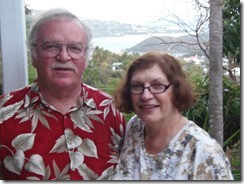 So, we visited.  We drank wine. We spent one night at Jeff and Barb’s for dinner, and another meeting them for dinner at the Pie Whole. 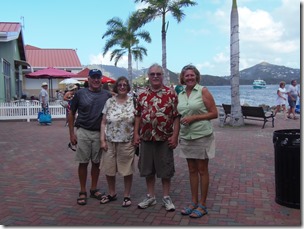 We wandered around Crown Bay, shopping with the cruise ship tourists. 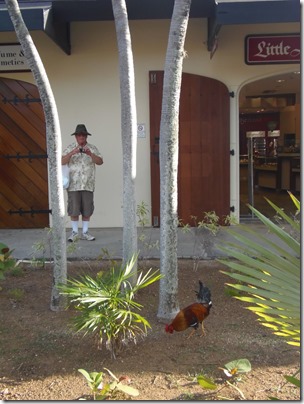 We wandered around Charlotte Amalie and Havensight, again shopping with cruise ship tourists – and roosters.

Here’s my photo of Howie taking a photo of one of the resident roosters. While EW and I are totally used to seeing chickens in almost any Caribbean setting, it’s still a new sight for our visitors. They should have seen the goats roaming in Luperon. 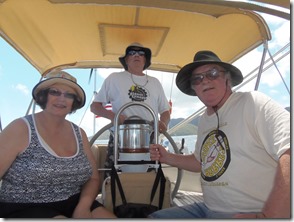 We sailed to St. John, where Howie and EW snorkeled, and Mary Jo and I enjoyed the shallows at the beach. Mary Jo and I also took a cab to town in St. John and had a girls’ lunch out. It was lovely. 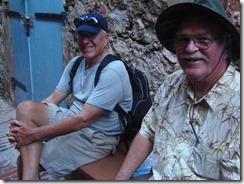 More importantly, we visited with EW’s only brother, met the lady who is sharing his life, and spent much needed family time. Also enduring the male Hart penchant for horrendous puns.

Below, a glass of wine at the Twisted Cork. Howie picked out a delicious Reisling from Argentina. 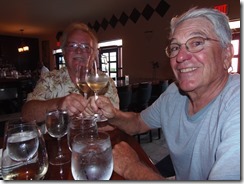 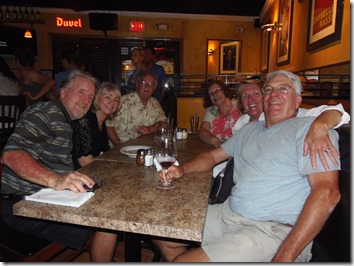 The St. Thomas Harts and Mary Jo at the Pie Whole.

Of course, we also taught them to play Mexican Train Dominoes. It’s what we do. I have no idea why I didn’t take a photo of at least one of the three games.