Home Archives Profile Subscribe
There Was NO Sobbing in Maine . . .
Life is a Beach 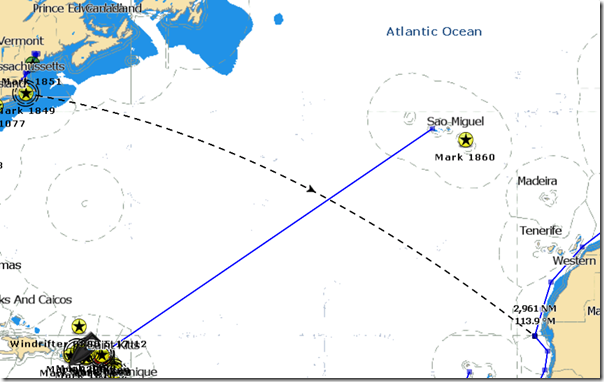 Lately, I’ve been tap dancing around talking about our plans. It’s been an interesting couple of months. In December, we fully expected that we would be sailing across the Atlantic right now. Wouldn’t that be exciting?  Our destination was Mark 1860 – the Azores – the first stop on an 18 month Atlantic Circle that included Portugal, Morocco, Gambia, Brazil and Argentina.

I had contacted sailing and cruising magazines and the Portland Press Herald to offer our Atlantic Circle story, and two publications agreed to pay me for dispatches during our cruise. This was incredibly exciting to me as during the past two-plus years, I’ve found a new passion in writing. Just as EW has practiced his music and worked on his singing style, I’ve practiced on perfecting my writing. The difference is that EW’s music is a cherished and important hobby, while I hope my writing will fund our adventures. That may happen, but my few writing assignments for 2013 did not add up to enough for a comfortable cruising kitty for the Atlantic Circle.

When our third decider, La Luna, made a few issues known, we agreed we weren’t going to be ready to go this year. That led to the question, “If we aren’t going to cross the Atlantic this year, what are we going to do?” Well, we have to work, so we need to be in the US. We had two options: sail back to the States or stay in St. Thomas. We are no longer equipped to winter over in the Northeast, so going back to the States meant randomly picking a state where we had no contacts, no job prospects,and no information. That left St. Thomas.

Within days of making the decision, EW had two job offers and accepted one. I still have to find a job and plan to spend my spare time writing and submitting articles and queries to various publications. We both have a to-do list to prepare the boat and plan to spread those projects out over the next eight months. While we’d rather be sailing in practically any direction, we’re both OK with our decision to stay here for a year. St. Thomas is not our favorite Caribbean island, most of our friends have already sailed north or south or east or west, and we have to W-O-R-K -- still, this living aboard in the Caribbean is a good life.

EW secured a job as a Captain for one of two small people ferries which take folks to and from the Marriot at Frenchman’s Reef and downtown Charlotte Amalie. The run is made at the blistering speed of 5 knots and the sturdy launch tracks like a train, so EW gets to stand backwards for much of the trip, talking with passengers and telling tales about St. Thomas and living aboard. Every night he claims to have sold another copy of my book, Harts at Sea: Sailing to Windward. It’s an interesting job in that it allows him to work as a Captain – and to work for tips – something he hasn’t done in over 40 years. It also allows him more daily interaction with other people than he’s had since we left Maine. He likes that a lot; EW is not an introvert.

My dream job would be to work as a pirate wench, but I’m not sure they are hiring 50-somethings for that position. I’m also looking at on-line/virtual positions and real jobs in St. Thomas. I’d go back to selling media advertising except I don’t have a car – or a driver’s license – and don’t want to get either one here. 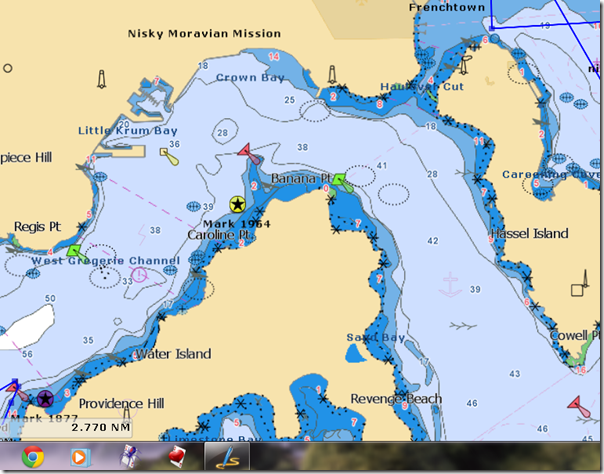 So, here we are at Mark 1964, on a mooring in Elephant Bay, off Water Island in St. Thomas. We’ve ordered new batteries -- La Luna’s most pressing problem -- and will install them this weekend. I’m looking for a kayak so I’m not boat-locked on the days I choose not to drive EW to and from “the office” in our only dinghy. Most of our friends have already left for other ports, but we have a few good boating friends who are also staying – and of course our cousins, Jeff and Barb the First, are here year round. So, we are staying in St. Thomas until May of 2014, when we will then sail across the Atlantic. In the meantime, the only thing we have to worry about are hurricanes.

I completely love reading how things have a habit of working out when you take the plunge! Excellent. I read with just a bit of greedy hope for our future! Much luck continuing with the writing gigs.

I certainly recommend your book. It's great!