Choices and Loss -- A Lesson in Opportunity Cost

I got scolded twice this week – once on Facebook and once here in a comment on my last post. Seems I’ve been missed. Sorry about that.

A couple of days before Howie and Mary Jo arrived EW and I had a Hart-to-Hart and decided that we had to change our cruising plans significantly. We made one of those hard decisions that we know is right, but we had a bit of difficulty in coming to terms with it, and perhaps I needed to feel sorry for us a bit. But only a little – because really, not only is ours a “first world problem” it’s not even a traumatic “first world problem”.  Instead of sailing across the Atlantic to embark on a 14-16 month adventure, we will stay here in St. Thomas to work for a year, build up the cruising kitty, fully prepare the boat, and begin our voyage a year later than planned. Trust me, this isn’t a hardship. It’s just not what we really wanted to do right now. Poor us.

When we left Maine, one of my dear relatives said, “You know, Barb, by the time you come home, some of us will have died, and that’s OK.”  At the time, I found her statement to be more than a bit macabre, and not at all a comfort. But she was right. In these last few months, we’ve lost a young cousin, a fellow Maine sailor, a Caribbean cruiser, and the son of dear friends. Frankly, it’s not “all right”. All of them were too young, all had much left to give, and all are dearly missed. This is true loss. This is why we have nothing to complain about. This reminds us of why we are so stubbornly persuing our dreams -- none of us know how long we'll have to fully embrace and enjoy life, and EW and and I decided to take all the joy we can for as long as we can. Unfortunately, for us that means we weren't able to mourn any of those loved ones alongside their friends and families and that’s not “all right” either. But it is what we accepted when we set out on this cruising life.

I’ve said it before: this is a selfish lifestyle. And it’s particularly selfish for the majority of cruisers like us who have a rather strict cruising budget. We miss births, funerals, graduations and weddings. We are those talked about at family reunions, but not those who brought a pot of Maine baked beans or a batch of brownies – and really, they probably don’t spend more than a few minutes talking about us. We don’t mail Christmas cards, or birthday cards, and we aren’t there to hug a friend who’s down. And you know what? That is our  loss – not theirs. It’s the price we pay.

I had told EW that I was going to Maine for a week before we set sail across the Atlantic. We haven’t been back to Maine in over two and a half years, and I wasn’t setting out on cross ocean sail without a visit. Even though our cruising plans have changed, I’m still flying back to Maine in May. I need a few hugs. I need to reassure my family that I love them and feel saddened by their loss. I need to see my sister. I need to do this for me.

In the meantime, I’m going to find a job for the year, and publish a whole bunch of posts, and keep submitting articles to magazines, and start to exercise again, and … well get a few things done. And then, I’ll tell you what it’s like to live on a boat in St. Thomas during hurricane season. Oh yeah, that’s going to go over big back home.

But it’s a decision we're comfortable with. As EW says, “We’ve made the decision and we’ll make it right.”  We are hoping for an easy huricane season and a low opportunity cost as a result.Tune in for more timely postings about this new adventure. In case you couldn’t tell, we do love this lifestyle and have no regrets – except for not posting for the past three weeks. Evidently that’s a bad thing. My apologies. It won’t happen again.

So, by way of apology – here are some photos from our winter in St. Thomas. Enjoy! 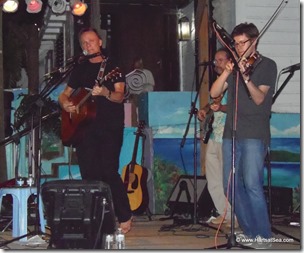 Jonathan Edwards came for a one-night only performance in St. Thomas. We purchased tickets immediately and were not disappointed. 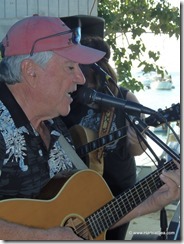 Of course, EW never disappoints me. Here he is playing at a jam at Joe’s Beach Bar.

We’ll move to our mooring in only a few days. Here’s where we’ve spent most of the winter – anchored off Honeymoon Beach on Water Island. 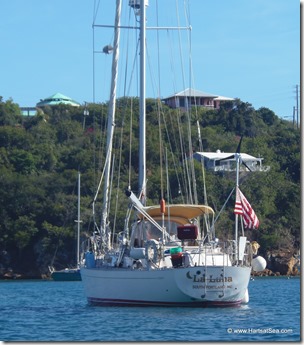 Earlier in the season, we were very surprised to find this ship at the dock.

Does that bow sprit look familiar? The rest of her looked like h.e. doduble hockey sticks. We think she went to Puerto Rico for work. Lots of work. 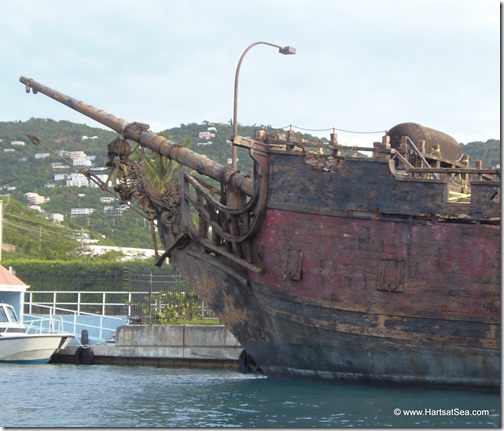 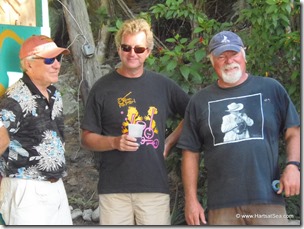 The Three Amigos – EW, Ross from s/v One White Tree and Peter from s/v Two Much Fun. 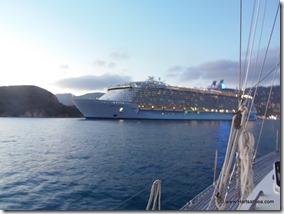 Above right – a frequent view from the deck. 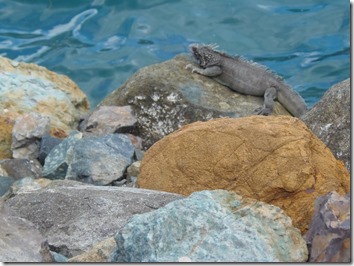 One of the many iguanas who live in the rocks near the Crown Bay Cruise Ship Dock. I assure you, he/she is very comfortable having his/her photo taken. These are a main attraction with the cruise ship passengers.

Missing what happens at home is one of the toughest parts of cruising for me, so I know what you mean!

As for "gap" year, nothing wrong with it at all. Not like the ocean is going anywhere in that time!

and thats why I love your blog.... you don't shy away from the big topics.

I must admit, its the one thing that bothers me about our cruising plans.... how will we handle elderly parents and the inevitable bereavements, children getting married, grand children appearing.... I just don't know.... but I guess like yourselves, we'll cross those bridges as we get to them.

On the other topic, If it helps at all, getting a decent cruising kitty for Europe is a really good idea... its not always cheap here!

Is it a selfish lifestyle? Maybe, but we spend the first part of our lives raising kids and working and building homes, so why shouldn't we be allowed to spend our times, after that, doing what we love to do?! Why can't it be about us and our dreams now? Having said that, I've not "been there, done that". But if all works out, I will be there soon. We have made the decision to sell everything and pursue our dream. We will be live aboards in a matter of months now. It's hard to imagine not being able to drop everything and go home for holidays, births and deaths. Although I have to say that I would probably move heaven and earth to be there for the birth of each of my grandchildren. But we did our time, and now it's time to "live the dream" while we still have the chance. Hard Decisions will arise. I can say I am pleased with the influx of well wishers of our decision to pull up stakes and "go for it". I appreciate your insight. Love your posts and miss it when you go 3 weeks without one......just sayin 😊

Now I have another year before I start worrying about you crossing the Atlantic! You are smart to wait if you didn't feel ready yet. Hope you were able to get a raincheck on your proposal. Miss you bunches. Hope to see you in a few months in STT.

Life on a mooring in St Thomas for a year?
It sure beats mowing the lawn and mulching the gardens!
I have seen first hand that you guys will have a great time at whatever you choose. Sorry you have to put off the trip for a while but just keep having fun!
Mike

Thank you, thank you! We at home feel like we are part of your dream when we read your posts :). Sad I didn't get to give you a cut while you were home, now that's selfish of me. Lol. I know you were on a family fun run. :) I would have done it for free just to see you! Ahhh next time. You have to look all gusseyed ( sp)? Up for your big adventure next year.