Home Archives Profile Subscribe
I Yam What I Yam. Unless I'm a Sweet Potato
Blame it on Steve from S/V Celebration–Well, Not Really 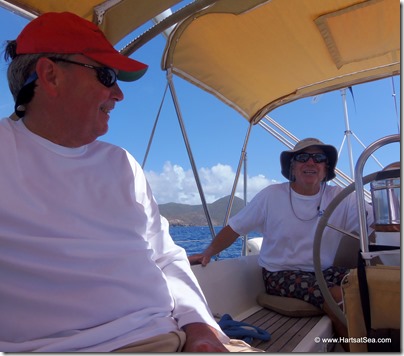 We’ve frequently invited our friend Mike Taber down for a visit. Mike is a sailor – both racing and cruising, and a long-time friend, co-worker, and former boss of EW. When Favorite participated in the World Finn Championship in Marblehead in 2001, Mike generously hosted us at his home and on his boat. Expertly driving us around the race course on a damp, gusty,sometimes rainy day. That’s a true friend. Since Mike knows we are planning to leave the Caribbean and head to distant shores, he decided to take five days and fly down for a quick visit. We were thrilled. His boss, wasn’t, but put up with it. Mike is the New England rep for Sea Hawk paints, a bottom paint we switched to in Trinidad. We are delighted with the paint, but Mike would have been welcome anyway. 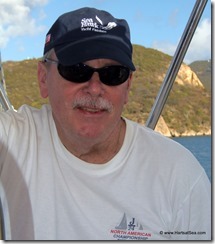 Of course, as soon as his visit was confirmed, EW set Mike up to be his personal shopper, providing a list of boat parts to be found hither, thither, and yon. Not only did Mike successfully find every item, he noticed that the wrong raw water intake fitting had been sent and took it back to get the right one. That’s the fitting that caused the high water alarm to blast during our last guests’ visit. Thanks to Mike, we have the correct fitting and a permanent fix. (Well, as permanent as you can expect on a boat.)

I, of course, provisioned and cleaned for his visit – though these posts may cause you to believe I only clean before guests, that’s not true. However, the pre-guest cleaning is definitely designed to be more thorough and to have everything clean when they arrive. Normal cleaning means I do one thing one day and another task on another day, making sure that everything is clean sometime that week. Just so 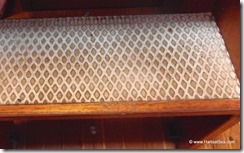 you know.  Part of that before guest or once a week cleaning includes the bane of my existence, the companionway ladder. The deep treads on this wooden structure are covered in a diamond-patterned non-skid that is a bitch to clean and impossible to keep clean. If we were running a charter boat I’d have to clean this sucker every flipping day. We are not running a charter boat. This type of non-skid is porous, and attracts dirt like nothing else I’ve ever seen. This is important to our story, so bear with me.

Above, before cleaning. At left, after liberal use of Amazing Roll-Off and a scrubby.

Mike had an agenda for the visit: 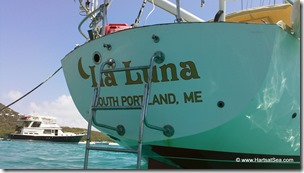 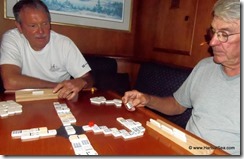 We are proud to announce that all goals were achieved. Mike is a goal-oriented kind of guy. We also taught him to play Mexican Train Dominoes and suggest that the Massachusetts Lake group of friends prepare themselves for a new obsession. If any of that group read this post, do note that Mike is very sneaky.

He knows boats, so he pitched right in and took over tasks or helped with anchoring and grabbing moorings.

He eats anything except Brussels sprouts, which is good because he is the only recent guest who neglected/refused to fill 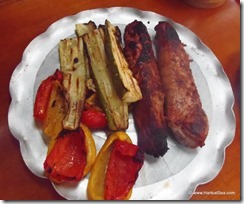 out the Preference Sheet. I found one of my dinners to be sub-par, but he and EW ate with gusto and I redeemed myself with the key lime pie. The dinner at left was nearly perfect, if I do say so myself. Mike wanted this photo of the presentation.

He’s a great raconteur and a good listener. We all talked a lot and most stories were punctuated with laughter.

He has this amazing little camera that works underwater and takes both stills and video. Some of those photos are in this post. 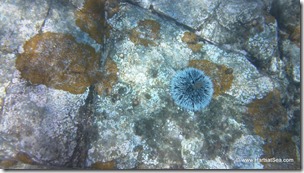 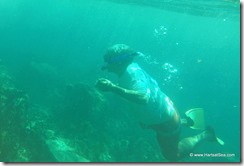 He took us out to dinner one night, though we all elected to do a “Pain Killer Pub Crawl” and dine on appetizers 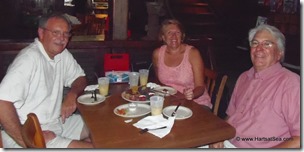 at each location.  The best Pain Killer of the evening – and the best fried pickles Mike’s ever had  -- were found at Tickles.  The best appetizers were the artichoke dip at the Pie Whole, and the mussels at the Twisted Cork. It was a good night, but not all of the bars offer Pain Killers. That’s probably a good thing.

As we were taking the dinghy through the cut between Hassel Island and St. Thomas,  I mentioned that we sometimes had to watch out for seaplanes as this was one of their preferred landing directions. No sooner than the words had crossed my lips and a sea plan flew low over our heads. No hats were lost in this adventure, but it felt darn close!  Those pilots do watch out for us. Bless them.

So, why wasn’t he the perfect guest? Well, for two reasons: 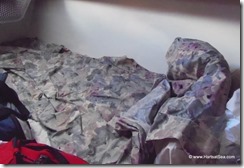 1. As you may recall from the article about the forward cabin, I spent time making it more inviting for guests. One of the things I did was finally finish the custom sheets, so that they <hopefully> won’t come un-tucked as easily as they have in the past. (Again, apologies to our dear friends/guests Cathy and Stu, because  they have been victims of the unfinished sheets on numerous visits.)  When Jimmy and Marcia visited, Marcia had to leave the boat due to mal de mer, so Jim stayed in the forward cabin alone. He found it to be much hotter here than in western New York, (big surprise) so he slept on top of the sheets, not providing a good test of the new, improved version. Mike took it three steps farther. He brought his own sheets! Really. How bad is that? He brought his own towel, too. I assure future guests that we do provide sheets and towels for your stay.

2. At some point, I had mentioned the companionway non-skid to Mike. But he’s a guy and apparently didn’t understand my angst.  A couple of days later, he and I were on deck and I suggested he watch his step when leaving the cockpit on the starboard side as the non-skid is wearing out there. In this case, the non-skid is a special cabin-top paint with sand or some other grit in it. Since we pretty much use the starboard side to get aboard the boat at anchor, that small patch of non-skid is less effective. Mike cheerfully suggested that we could purchase a diamond-back non-skid and stick it down there. I narrowed my eyes in disgust, and he did note that. “Oh! If you don’t like it in the beige color like you have on the steps, you can get it in white.” Stew had joined the conversation in time and made that  wince and a sharp intake of breath, combined with a slight head shake, to warn the other fellow that he is treading dangerous ground. It was too late. “Mike,” I said sweetly, “the non-skid on the companionway is white.”

Mike is welcome back at any time. I’m sure he’ll never mention the non skid again, and I bet he leaves his sheets at home where they belong. 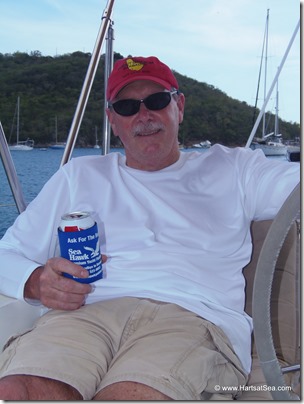 Mike sent an email after reading this. Here's his comment:

Love it!
Next time the sheets stay home and I'll bring a jug of Roll-Off instead
Mike

Nice write up. Mike is a great guy and hard worker. He deserves to have some time off to spend it with friends like y'all. Thank you all for having him. It actually helped me to not have to talk to him for five days. By the way, he called me at least twice in his first day back to work so he obviously missed me. Signed the Boss who really didn't care he was gone... Grin

Safe Travels, Mike speaks very highly of you both

The last time I was in St. Thomas I had the fried pickles at Tickles as well...they are very tasty...although the best I ever had were in Austin, TX at a dive bar....I don't even remember the name of the place.

Your guests fill out a preference form? Please tell me more.