Home Archives Profile Subscribe
A Boater's Language and Our Private Language
I Yam What I Yam. Unless I'm a Sweet Potato

This actually should have been listed in a recent post as one of our phrases in La Luna language.  We’ve said it a lot over the past two years – and loyal readers of this blog may be sick of the philosophy. But really … at least it happened here.

The alternative phrase would be, “It’s better to be lucky than good.” I don’t like that, because it implies that EW and I aren’t trying to keep La Luna afloat and safe. We, particularly EW, work very hard to repair, install, tweak, paint, clean, sew, and keep up with all boat projects. Since we are planning a long-distance sail in a relatively short while, EW has been working diligently to complete a long list of boat projects. Recently, while we were enjoying the much anticipated visit of Jim and Marcia, we encountered Another Project that has become a big, giant “whew” moment. Thank goodness it happened here!

First of all, EW had been worried about the batteries which had not been charging fully. Our friend Ross, from One White Tree, suggested that we needed to go into the dock and equalize the batteries. EW opted to do so a couple of days before Jim and Marcia arrived, allowing them to get acquainted with the boat in a slip. We had a lovely first night together, enjoying sparkling wine and snacks with cruising friends from La Creole and Ocean Star for an impromptu welcome to the Caribbean party for Jim and Marcia.

The next day, we had planned to sail to Buck Island, snorkel with the turtles, have lunch, and return to our anchorage off of Water Island. Diana and Ross from One White Tree had agreed to join us. After we left the dock, I scooted over in the dinghy to pick them up, then EW turned the boat into East Gregerie Channel. And then .. the high water alarm went off. This is never a good thing. I’ll refer you to Diana’s excellent blog post on the incident, after all, she was the only one with time to take photos. Jim sailed the boat. I unfurled the jib – badly, and Ross and I worked to fix my big, huge, mistake with the jib sheets. Diana pumped the bilge, and Marcia handled the chaos beautifully.  There were no photos were taken during these exciting moments.

Once we had anchored – the first time – it occurred to me to ask Diana to document our new form of guest entertainment. She did a great job. We attempted to anchor under sail in a rather crowded anchorage, and just didn’t get far enough into the anchorage before we lost our momentum. Since we’d furled the jib so EW wouldn’t be beaten to death by the sheets, we had no option but to anchor where we landed, and that put us rather very really, really close to the motor yacht Northern Star. When we first anchored, we could actually chat with their crew from our cockpit. That is never a good thing. We were just off their port bow, and explained that we had no engine, that EW could fix it, and then we’d be able to move, In the meantime both boats would keep an anchor watch. They would swing differently than we would, and, as their captain so graciously put it, “We wouldn’t want to damage your boat.” I think we were the burdened vessel as in it would be entirely our fault, but it was nice of him to show concern.

EW had diagnosed the problem while we were struggling with the jib sheets: the raw water pump hose that lets seawater in to cool the engine had ripped. Seawater was pouring into the boat. Seawater outside of the boat, good. Seawater inside, bad.  He had to go into Crown Bay Marina, purchase a new hose and install it. Again, for the rest of that day’s adventure, check out Diana’s blog. She’s very good. I’ll just say that the Motor Vessel Northern Star is my favorite yacht of all time. Thank you.

EW got her done, we enjoyed lunch and consoled ourselves with Diana’s outstanding frosted brownies. I was too late to go to Turtle Cove that day. Unfortunately, the wind and waves were contrary – something that can happen occasionally here – and as the afternoon went on Marcia began to feel ill, and we never did get to Turtle Cove that week. We were dreadfully sorry not to show Jim and Marcia the vacation we’d planned for them, so even though we’re glad “it happened here”, we wish “it” had held off for a couple of days.

Anyway – here’s the big “it”. EW had been changing the hoses, and changing that one before we left was definitely on his list. Unfortunately, he hadn’t gotten to it and she blew at a very inconvenient time. But here’s the thankful it happened here thing.  Once he had replaced the hose, he found we were still having some leakage, and discovered that the hose clamps he had used for every hose in the boat were all disintegrating. Every last one of them. He has purchased the stronger, better hose clamps and has been replacing all of the old ones this week. It’s a nasty, uncomfortable job, requiring him to lay across Pine Top, our Perkins diesel in an uncomfortable and bruising position. He swears a bit, moans, groans, and heaves a heavy sigh every so often, but he’s getting her done. More on that in a subsequent post.

Thank goodness it happened  here, where we have access to new, better hose clamps, and not in the middle of the Atlantic. Oh my.

While we opted not to subject Marcia to any more rolling seas, we had a wonderful visit She definitely gets the Best Sportsmanship Guest Trophy. We enjoyed a hot hike on Hassel Island, where Marcia kept an eye out for birds and proved that she knows how to attract them. This was followed by a lovely afternoon repast at the Cork and Barrel, and now EW and I have a new friend, Jim’s wife, Marcia. So glad that happened here, too. 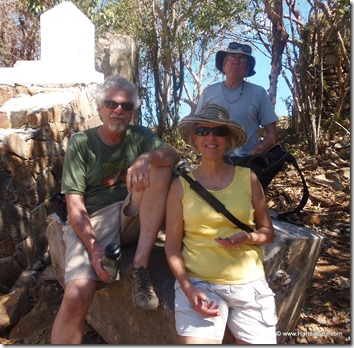 It is YOU and STEW who need to be commended on being wonderful hosts and showing such compassion for this non-sailor!
Your champagne welcome on our first night was delightful, as was meeting your friends. Diana's brownies are to die for - rolling swells, not so much. I was fascinated with how you function so well in the galley and entertaining guests. And I must say, Jim and I are amazed at the work going into the headliner. Wow! The V berth was most comfortable.
After experiencing the mechanical hose fiasco, the high water alarm, and all the work that goes into keeping the boat "shipshape", I have great respect for all that you both do.
I actually have reread "Sailing to Windward" again while we are here in Florida. How much more meaningful it is to me after sharing days with you. The sailing/boating "lingo" made more sense and the trials and love you both share shown through even more since I had a small glimpse of your life.
Thank you, thank you, thank you and your wonderful family of cruisers for all that you shared with us.
I treasure our new friendship and look forward to future get-togethers. Sending hugs and love!

Oh my goodness! Thank you so much for your wonderful comment. We so look forward to seeing you again and are delighted to have had the opportunity to develop our friendship in person. Hugs to you!