Home Archives Profile Subscribe
Getting Ready for Guests: Fixing the Forward Cabin
A Boater's Language and Our Private Language

Flash Back: Moving from Love Nest by the Sea to Love Nest ON the Sea - Part 1, The Decision

NOTE: This post is in response to the www.Raft-up.net topic of the month regarding moving aboard. They've asked new live-aboards, long-time live-aboards, and those in the midst of the move to write about their experiences. I'll post Part Two later in the month. Here's Part One -- making the decision and moving aboard. 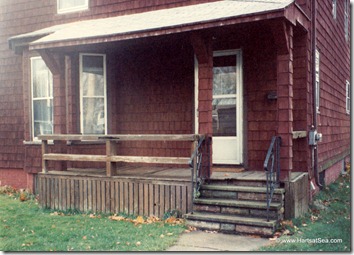 After we married, EW and I had a hellish year trying to purchase a home. It was the wrong time to buy, there were issues with his divorce documents, and we kept looking at old, run down houses. (EW is a fearless do-it-yourselfer.)  Ultimately, we purchased a four-square in South Portland, one block back from the Fore River, and two blocks from Centerboard Yacht Club. There was a smidgeon of a water view from Favorite’s bedroom and the window in the upstairs hall, so we referred to our home as our “Love Nest By the Sea”.  Since the home needed a whole lot of work, this was often said with some sarcasm. Fixing it up took 9 long years, partly because we took every summer off to sail, and partly because we decided not to complete renovations during the two years Favorite lived with us while in high school, opting to subject him to an ugly but not destroyed, main living area. That’s another story, but let me say that undertaking a full home renovation, and doing much of the work ourselves is an excellent test for living aboard.

NOTE: The photo at top is proof that EW is a fearless do-it-yourselfer, that our love nest needed needed a lot of work, and that I was clueless. Honestly, I didn’t know we had this in us. Somehow, we could see the treasure at the end of the rainbow. 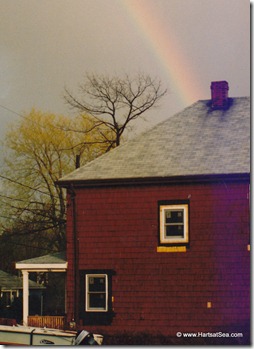 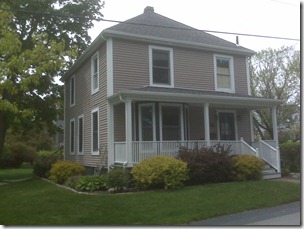 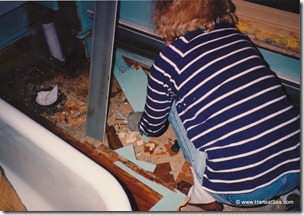 There was a lot of work and angst between the rainbow and the treasure. At right, I’m tearing apart the upstairs bath as one of our first projects. Oh joy.

Spoiler alert: Living aboard is much easier.

Fast forward to the last part of 2001. We had a fully renovated home, and in fact, realized that we had to start in again on the first rooms we’d done.  EW was working as a yacht broker, commuting 45 minutes to work, and often working six or seven days a week. Before that, he had sold marine supplies for a wholesale distributor, rarely worked weekends and was often home by 5:30. Now, I was alone more on the weekends, I was bored, and I had actually begun looking for another “fixer-upper” – which would have been a terrible idea. Favorite was self-supporting and living in California. Our first Lab, Coffee had passed away, and Jake the Sailor Dog had moved in with gusto. Jake did everything with gusto. Finally, we had experienced tremendous losses.

2001 was a tough year. My dad died right after New Year’s in 2001. Three much loved relatives had been diagnosed with terminal cancer in 2000 and 2001, and we lost one of those in July of 2001.  On September 10, 2001, EW and I flew over New York, and marveled at the Twin Towers. The next morning, they were gone. While we were not personally affected by the horrors of Washington, Pennsylvania, and New York, I took it personally and spent hours on the web reading the New York Times profiles of all of the victims. This is not something I would recommend, but the result was that I was open to great change. I was struck by how many mentioned that their friend or loved one had “lived life to the fullest”, and how often travel, sailing, and adventure were listed as past-times. Of course the questions had to be asked, “Was I living my life to it’s fullest potential?” “When was I going to travel?” “Would I sail to distant shores?”  After fifteen years of marriage with EW, I had become an accomplished coastal sailor and navigator. Our stated shared dream was to live on a boat and sail the world. What were we doing to move toward that goal?

I had been doing the research. At the time www. Sailnet.com published articles by cruisers and day-sailors. I don’t remember reading any traditional blogs in 2001, but I lived for Sue and Larry’s posts on Sailnet. Both of them had sailed extensively prior to meeting and marrying. Both of them were good at boat repairs. They had purchased a Formosa Peterson 46, moved aboard, and were doing major repairs on the boat, writing eloquently and with humor about the lifestyle. Let me give you an idea of my infatuation with Sue and Larry. EW and I had decided to attend the Newport Boat Show in September, and though we knew we weren’t in the market for a new boat, we eagerly toured all prospects at the show, subjecting them to three tests:

It was time to shake things up. Early in January, EW proposed a road trip to a junk yard for boats in Massachusetts as he had seen an ad for a Alden 50 that had been in a fire and was for sale. EW is a fearless do-it-yourselfer. Thankfully, even he realized that this charred interior was beyond his capabilities and our time/money. However, I walked around below, observed the layout and stated, “I could live-aboard this.” It was all he needed to hear, and he began to seriously search for our boat.

We viewed the boat that was to become La Luna on January 19, 2002 and called our neighbor that afternoon to ask him to recommend a realtor. He immediately stated, “You’re going to sell your house and buy a boat. I hate you.”  We actually hadn’t originally planned to go whole hog in that fashion. Well, maybe EW hoped and planned. He played me like a fiddle throughout the month of January. Selling the house was actually my idea – one that would have been difficult for him to propose since I had stated fifteen years prior that “I don’t think I can sell my home and all of my worldly possessions and move on a boat forever.”  During January of 2002, he was so cool about the idea and played the devil’s advocate so well that I was pissed. “This was your damn dream! Get excited why don’t you?” Can you here the fiddle music?

We hired someone to survey the boat, re-decorated the upstairs bathroom at the suggestion of our realtor, and accepted the first offer for our home in early February. We closed on the home on March 22nd, and closed on the boat on April 1st, moving into a furnished home in Bath, Maine – closer to the boat. I commuted fifty minutes to work, EW, with a shorter commute, spent evenings at the boatyard working on our new 1985 Cheoy Lee 47,designed by David Pedrick. Jake the Sailor Dog, a victim of divorce, obsessed over the move, and kept one of us in sight at all times. We had a ginormous yard sale at the home before we closed, moved stuff into storage lockers in Portland and the garage at the rental, and had another yard sale in Bath. Between January 19, 2002,  and May 19, 2002, we got rid of a whole bunch of our worldly possessions and our home, and moved onto our Love Nest On the Sea to be full-time live-aboards.

It’s a decision I have never regretted. 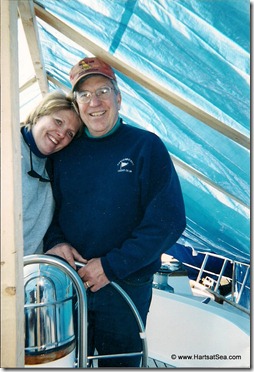 At left: After the closing.

Below, La Luna, ready for launching. 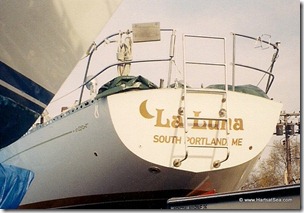 I have been chatting with Jim about their visit with you guys. He gave me the site info from One White Tree so I could catch up on the adventure with your engine hose and where it lead to. Great article and pictures. Be safe.