Home Archives Profile Subscribe
Flash Back: Moving from Love Nest by the Sea to Love Nest ON the Sea - Part 1, The Decision
Thank Goodness it Happened HERE!

A Boater's Language and Our Private Language

Most of us who cruise have learned the language of sailing. Port and starboard, head, galley, sheets, painter, companionway, and boarding ladder all roll off our tongues with ease. In fact, most of us have been known to inquire of a landlubber hostess, “May I use your head?” When you think about it, that’s an unpleasant sentence for folks not in the know. “Use it for what?” “For THAT? How disgusting!” I was not a sailor when EW and I met, and he didn’t have a boat at the time, but I was still made aware of the correct terms and expected to use them. “If a rope is doing something it’s a sheet, halyard, a dock line or painter.” I was in love, so I learned.

A sailor’s language also consists of words or phrases that are universally known, but not required by the captain. Before we left Maine we participated in a charity regatta. When our dear friend, Lynnelle, called her mom in Texas to tell her that she was going to participate in a sailboat race, her mom asked what possible help her daughter could  provide. “I’m going to be rail meat, Mom,” Lynnelle proudly replied. Her mother gasped, “Lynnelle Lynn, that’s just nasty!”

Those of you  who’ve followed for a while know that EW and I have our own private language aboard. We are those kind of people and some of our words or phrases followed us from land home to floating home. Here are a few examples:

I asked some of our boating friends to share their private language, and didn’t get much. Lots of folks call their autopilot Otto, One friend said that they always called the engine in their former boat Mr. Wonderful Engine, Sir, but hadn’t named the engine in their new-to-them boat. That engine has provided months of overheating angst and I suggested it was past time to give him a good name, and perhaps a tot of rum. Not sure if that did the trick, but everything’s fine now. Naming things can be very important.

Recently, we’ve added three new phrases to our lexicon. I’ve had the cold bug from hades and have not been a happy camper. This has gone on for weeks and EW is getting as sick of it as I am. Things have gotten a little slack here and I was low on patience. Now, EW will readily admit that he has a problem finding things. I’m not sure whether it is nature, nurture, or gender oriented, but the man has serious CFS – Can’t Find S##t. Here’s how it goes, EW will lose something and begin to look. He gets exasperated and sighs and mumbles while he looks. He looks in ridiculous places – because why look in the most logical first. He looks past the item because it was upside-down or at the left of the counter when it should have been on the right, or some other foolish excuse. It’s uncanny. 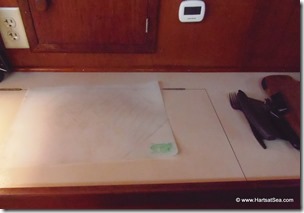 I was feeling lousy but we had to eat, so I purchased an acorn squash and told him that if he peeled and chopped it, I'd make Trinidad Squash Soup. For the purpose of this narrative, it’s important to understand that EW puts the clean dishes away 99% of the time aboard La Luna. I was trying to write something, coughing and feeling sorry for myself when I heard EW banging and mumbling in the galley. EW couldn’t find the vegetable peeler. I paused to watch. He checked both sinks, he got the flashlight and looked behind the stove, he looked in the vegetable peeler storage area – three or four times, his efforts got louder. “I just used it yesterday, and I know I washed it,” I stated. This means that it couldn’t have gone far and that wherever it went, EW did it. He understood the message and was not pleased. Finally, I shooed him out of the galley, walked between the counters and looked. To the right of the lift-up storage area for utensils was a pile of five or six clean utensils that he’d dropped there. Among them was the vegetable peeler. I found it in fewer than five seconds.

Wasn’t there a game show in which someone would bet he or she could name that tune in a certain number of seconds? I should do that the next time EW loses something. I’m sure he’d see the humor … or not.

NOTE: These photos are a re-enactment. Above, the pile of kitchen utensils, located approximately 3 inches from the compartment where they normally reside, would have been further camouflaged by a large acorn squash and chef' knife on top of the white cutting board. 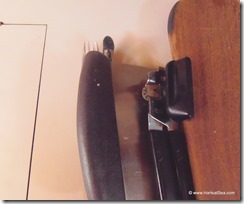 At left, we have the peeler peeking from behind the scraper. Bad peeler! And finally, the dramatic reveal.

Anyway, I was feeling just miserable enough to be a bit snarky at my discovery of the vegetable peeler. You know how we sometimes get, ladies? Men CFS and women LTTT – Love To Tell Tales. Despite my bronchial crud, I was invited to cocktails aboard One White Tree a couple of days later, and dropped by in the dinghy earlier in the day when Diana was talking with Donna from Ainulindalë. I told them about the vegetable peeler and shared that I had used a new phrase that morning when EW couldn’t find yet another thing, suggesting this new lost item was “with the vegetable peeler.” He was not amused, but Donna and Diana loved it. So much so that when EW and I showed up for cocktails, Donna’s guest, Linda, made a funny comment about the vegetable peeler. I glanced at EW, who was chatting with the guys,  turned back to Linda, and gave her the throat slash signal, meaning “ixnay on the eelerpay”. That La Luna event hadn’t yet reached humorous status for all on board.

I left the wonderful party at eight so I could go to bed early, and while alone, I thought a bit about this story. EW really CFS, and he can often laugh about it. “It’s with the vegetable peeler.” is a great way to suggest that the lost item is in the most logical, easiest place to look. It’s a good line. But to be fair, I also suffer from a failure to find things. In my case it’s my reading glasses. I’ll be at the computer or Kindle, get interrupted by a door yard call, boiling tea kettle, or immediate desire for lip balm, jump up and remove my glasses under way to deck, galley, or stateroom. This is a boat, for heaven’s sake. How often could I lose my glasses in fewer than ten seconds on a boat? On average, at least once a day, I then spend 30-60 seconds or more, retracing my steps and looking for my glasses.  So, if I’m allowed to tell EW that his lost item is “with the vegetable peeler”, he gets to say, that my lost item is “with your glasses”. It’s only fair. And it’s true.

So those two new phrases look like keepers and I’m sure they’ll be repeated on board for years to come. But they aren’t my favorite new addition. The winner of our favorite new phrase comes from a reader of this blog, who commented on the recent dinghy article and the link to the old post about the red dinghy key that isn’t a key. From England, S/V Phoenix of Hamble said that he and his wife both forget to attach the safety cord to the outboard motor, and then wonder for a while why the motor won’t start. I’ve gotten much better at this, but struggled for the first year. It was embarrassing. Anyway, my new best friend from England writes that he had his wife love the blog, and have named the cord the “Hart String”.

I love that, so we stole it. As one of us heads up the companionway to go for the first dinghy ride of the day, the other will say, “Do you have the Hart string?”  Thank you, Captain of the Phoenix, we look forward to hearing about your cruising adventures.  And Linda, when you come back from Puerto Rico with Donna and Kirk, you can mention the vegetable peeler to EW. It’s funny now.

I'm pretty sure they have age related counselling for CFS!! And the business card for that? It's with the vegetable peeler.

That's made my day!

I think all boater's, or anyone with a hobby for that matter, has their own language. It was definitely a fun read reading about yours!