Home Archives Profile Subscribe
An Unplanned Row - or Two - or Three
Married for Life, But Not for Lunch? What 24/7 Really Means 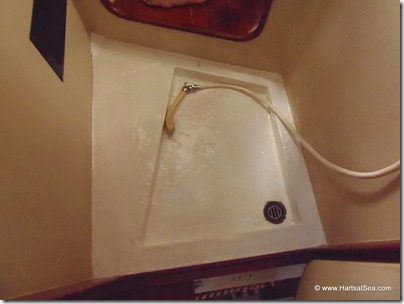 Oh, the joy of showering in one’s own shower. The feel of skin on skin. The aroma of my favorite shower gel, the joy of shaving my legs without an audience. Don’t try to picture this in your mind – I’m over 50 and jiggly with it. And don’t for a minute imagine EW and I showering together. Not saying that hasn’t happened, but that’s not the kind of blog I write – and this is a really small shower. Do feel free to imagine my euphoria when, after six weeks of showering on deck,  I finally was once again able to take a private shower in our floating home.

EW had to undertake a major shower repair, so to keep clean, and maintain our friendships, we would jump into the Caribbean Ocean, climb back on deck, soap up the bared parts and over our swimsuits, shampoo our hair, jump back into the ocean for a swim and rinse, then climb out on deck for a fresh water rinse. Alternatively, we could simply use the fresh water hose on deck, but if we were washing in public in swimsuits we decided we might as well save water by showering the cruisers’ way. At least once during the week I’d be soaped up or even shaving my legs to see one of the tourists boats enter or leave the beach along our starboard side. I do not  want to see those vacation photos.

The Shower Project started out as Another Project when I discovered a hole in the fiberglass while cleaning. I knew right away that this wasn’t a good thing. We have a traditional boat shower stall, with fiberglass over a wood frame, and a teak grate on top. More modern boats have a home-like all fiberglass shower stall – some of those in the catamarans are huge and I get shower envy. But I digress. I was scrubbing the shower, but not overly hard, and my fingers sound this irregular section that hadn’t been there before. It was a hole, about the diameter of a penny. I hated to break the news to EW, but someone had to and I’m the only other person on board. He took it well.

Thus began Shower Project. He could have completed it sooner, but in the midst of the project, Cousin Jeff asked EW to fill in at his carpentry shop for a month. EW also wanted to take his time to analyze the situation and even had Jeff out to the boat for a consult. Of course, no boat project remains a one-task project, and this one fell into the “As Long As We’re Doing Blank, Let’s Do Blank-Plus, Too” category of projects.

SIDE NOTE: I am very familiar with this category because in our “normal” life EW and I renovated a home. As long as we are taking of the siding, let’s put in new windows. As long as we are redoing the wiring, let’s put in an attic floor. As long as we’re renovating the kitchen, let’s move the downstairs bath. You get the idea. I have come to understand that a couple who survived nine years of on-again/off-again full house restoration can easily survive living on a small boat at sea. In fact, it’s excellent training.

So, as long as EW was going to rip apart the shower floor, he was also going to re-plumb the shower, install a new shower sump, and change the path of the through-hull hose so that it bends far above the waterline. It was a big project. It created a bit of a mess, but that was mostly confined to the aft head and pilot berth area. I elected not to undertake more of my big project while his was going on. It just gets too confusing, and there’s not enough room for two big projects at once. EW kept apologizing for the mess and for the time the project was taking – but none of it bothered me. Even the showers on deck aren’t horrible, and I’ll continue to do so some days for the joy of swimming and to conserve water. I just would like to have the option of showering below in private when I want to.

So, here’s what my hero did:

So, it’s the little things, like a working shower,  that make this lifestyle work for us. More than that, it’s EW’s ability and willingness to tackle the big projects. Thank you, EW. Kisses. Wanna take a shower?

PS. You all know that EW tolerates being “The Topic”. Please understand that he often delights in it. Throughout this project, I’d hear – “Come take a photo of this for the blog.”

There are 67 photos of the Shower Job, which are a testament to my love and respect for EW.

I only posted 7 of them, which is my testament to my love and respect for you. 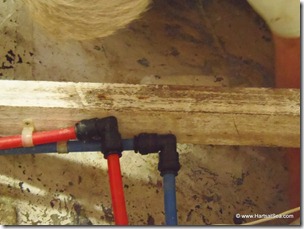 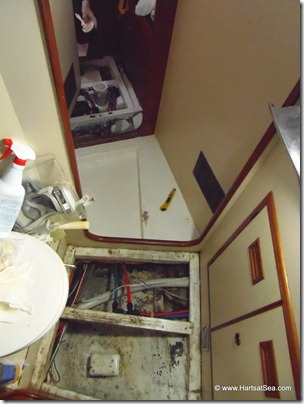 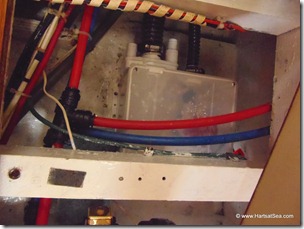