Home Archives Profile Subscribe
L-O-V-E
Flash Back: Moving from Love Nest by the Sea to Love Nest ON the Sea - Part 1, The Decision

Getting Ready for Guests: Fixing the Forward Cabin

I know, big whoop.  EW has been the god of projects – Thor, Zeus – whomever, he’s been tearing it up this month, and his list is a long one. I am not worthy. But the dreaded Forward Cabin Project has been looming on my horizon and time was short. Here’s the thing. The only reason there was a Forward Cabin Project is because I screwed up years ago, and never fixed my mistake. It bugged EW who, 1. probably wouldn’t have made this exact mistake and who 2. would definitely have fixed it long before now. Here’s what happened.

During The Year From Hell, when we hauled out for 6 months that lasted 12 and removed every blessed thing from the deck, one of my projects was to replace the headliner with new fabric when we were putting the boat back together. It was my job. Fabric jobs are always my job and the phrase is “It’s a fabric thing.” This included laying vinyl flooring when we had a house. I am very good at making an exact pattern in the bath, cutting the vinyl and laying it down. Perfectly. Headliner is a whole different story.

So, the old headliner was removed early in The Year From Hell, as we had to reach the million nuts that were attached to the hundreds of deck items. Really, you have no idea. I had no idea. I didn’t know real people could take this stuff off a deck. At that time I measured the fabric and optimistically ordered it from Sailrite. Then, we stored it at each of the three rental properties, carefully moving it from place to place. I did tell you it was The Year From Hell, right? Finally, nearly 12 months later, it was time to install the headliner. Except I kind of forgot how it worked and I definitely measured the forward cabin pieces once, twice, thrice and still cut them too short. In a boat of our vintage and style, the headliner is often fabric, stapled to what I call “ugly trim”. Ugly trim is hidden by the headliner and the staples are covered by “pretty trim”. Well, that’s how I remembered it, anyway. I had carefully removed and marked all pretty trim and most of the  ugly trim. Tying them in bundles to correspond with each room in the boat. The ugly trim that was removed, covered nuts from the deck stuff. If it didn’t cover nuts, it wasn’t removed. 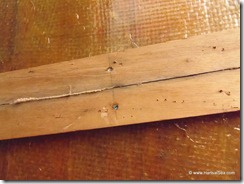 Here’s the error. Since most rooms in the boat are longer than the width of the fabric, you will find two pieces of ugly trim screwed within 54 inches of the forward bulkhead. One is supposed to remove one of those pieces of trim and staple headliner that goes both fore and aft of that trim to the edge of the trim. And then, one re-attaches the other piece of ugly trim to create a nice seam. You “simply” pull the fabric tight at the other end and along the sides, and around the lights, and around the hatches, and around the dorade vents, and … well there’s nothing simple about it. I had forgotten what to do with those two pieces of ugly trim and simply stapled fabric to it, leaving a two inch gap, since I figured there must be a piece of pretty trim to cover it.

Here’s the ugly trim in question. You can see scraps of fabric from the origional headliner at left in the photo. One would think that I would have noticed them and wondered …  hmmm, I bet this is important. I did not wonder. 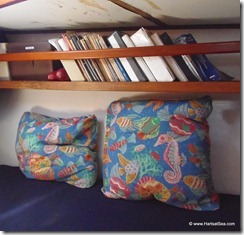 EW wasn’t pleased with me. I had struggled with this room – though it turned out to be the easiest of all of them – and had no intention of re-doing it at that time. Plus, I didn’t have enough fabric. I did try numerous fixes. EW absolutely refused to have a special piece of teak trim cut. Go figure. I found out that various white vinyl from Home Depot looked just like white vinyl fencing taped to the ceiling. EW was even less thrilled. Now I had staples, ugly trim, and tape marks showing.  I completed installing the headliner for the rest of the boat, using the ugly trim as it was meant to be used, and I moved on.

You don’t really notice it much in the photo at right, do you? Much? 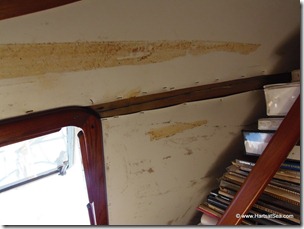 Now you do. This is the guests eye view of the mistake.

EW was still not thrilled. The only time you even saw the ugly trim was if you were lying on your back on the bed. In the guest cabin. So, who saw the ugly trim? Guests. Still, I didn’t rush out and  purchase new headliner. The Year From Hell had traumatized me and I needed time to adjust – five years or so should do it. Before I could fix it, we went cruising. The boat sailed just fine with the ugly trim showing. We went to a fabric store in Fajardo in December 2012, but they didn’t have any headliner. Oh darn. This October, EW accompanied me to a fabric store in Trinidad and we bought headliner. Oh darn – for real this time.

This week, we are delighted to host friends from New York for a few days. Jimmy and EW went to grammar school together have remained friends. We are super excited that he and Marcia are going to join us for fun in St. Thomas. EW pretty much insisted that the forward cabin be fixed for their visit. We didn’t fix it for Favorite, last year in St. Thomas. We didn’t fix it for the Klein’s visit this past summer in Grenada. You can bet that one of us mentioned it both times. In case you’re wondering, I was not the person who brought it up. You probably knew that. 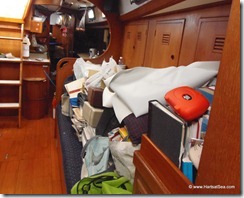 I couldn’t fix the forward cabin until EW completed the weeks long repair of the aft shower. He agreed with that. We can’t have two major projects going at the same time and actually live here. So, last weekend became Forward Cabin Weekend. It wasn’t awful. Here’s what I accomplished: 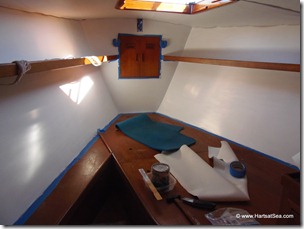 The whole thing – 2 thru10 – only took a day and a half. What had I been dreading? It looks great, all ready for Jimmy and Marcia. My apologies to Stu and Cathy, Favorite, Amy, Lynnelle, Jon, Ed and Lynn, Jimmy, Howie and the rest of you for any indignity you may have suffered due to your view of the ugly trim and staples. Can you forgive me? EW has.