An Unplanned Row - or Two - or Three

I’ve been rowing dinghy again, but not intentionally. It’s often been too windy and rough for a comfortable row. Both of us worked early in January -- EW for his cousin Jeff, at Carpentry Plus, and I for a conference at the Marriott -- so we were using a lot more gas due to the commutes. I would bound out of bed (sort of) with EW at five-Oh-Darn-forty-five (not to be confused with Oh-Dark-Thirty), and deliver him to Crown Bay Marina to meet Jeff. Later, I'd scoot in for my work commute, involving dinghy, dollar bus, and ferry. Around five, EW arrived at the dock, took the dinghy back to the boat, and would motor in to pick me up later in the evening.

You know where this is going, right?

I didn’t have to work on one Thursday, so I planned to write and clean in the morning, and to go in at three to run a few errands before EW returned. I’ve been doing a lot of walking and standing and lifting at work, and didn’t feel like a walk. It was breezy and the seas were too bumpy for yoga on the boat, and definitely would be too bumpy for rowing – at least in one direction. These were my excuses for not planning on exercising that Thursday morning. The universe disagreed.

You do know where this is going, right?

Yep. Early on that fateful day, I started the dinghy motor, EW and his back-pack popped down from the deck of La Luna,  and we booked for shore. It was a bouncy, wet, uneventful ride --  until the motor died just as we passed the entrance to the ferry dock at Water Island. EW said a bad word. Shame. He shipped the oars and started rowing into the wind and waves, making very little headway – precisely why I hadn’t rowed that morning. In the meantime, my mind was going a mile a minute regarding today’s “schedule”, my lack of footwear, and my lack of wallet. Looks like I’d have to hang around for an hour in the dinghy, waiting for the fuel dock to open, and beg Heidi in the office to let me come back and pay for the fuel.

EW continued to row, making little headway against the wind and waves. “Where are all those people who try to rescue you?” he asked rather plaintively. “I think we’re too early for the,” I replied, and then an idea occurred to me. First, I tried to flag down a dinghy that was heading toward Crown Bay from the other end of the anchorage, but he didn’t see us. Then, I saw the ferry coming from Water Island. “Flag it down,” I said. “You can get on and I’ll row back to the boat. We have gas there. I’ll purchase more when I go in to run errands.” EW looked at me, “Are you sure?” “No problem. The wind and waves will be working with me and I usually row farther than that.” So he did and we did. But the ferry captain was dubious. I had to assure him that this was “my choice”, and “my idea”. Then I rowed home. Evidently I’ve successfully indoctrinated the regular commuters because, while all looked over and waved, none of them stopped to see if I needed help. One newbie swung my way, but I waved him off before he got too far off course. I am boat woman. 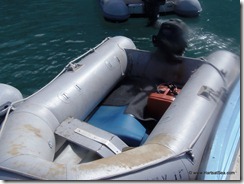 Faithful readers will remember an earlier more embarrassing moment dingy moment from our last visit to St. Thomas. "Dingbat in a Dinghy"  If you don’t want to take time to read the older post – the spoiler is that I left La Luna in our old dinghy without oars and without the gas tank. It seems the motor will run a bit, just enough to leave me adrift among the mooring balls.  Of course, the first folks to get close were a young lady and a sailing curmudgeon. “Humph. Ran out of gas, did you?” “Er, yes,” I replied, praying he wouldn’t actually discover I didn’t even have a fuel tank. He was in a hurry, but did agree to tow me back to La Luna. When we got close I hailed EW, who came on deck to receive my line and knew immediately that the tank destined for Lunah Landah’s  stern, was still on La Luna’s deck. I remain grateful that he didn’t expose my stupidity to my surly rescuer. 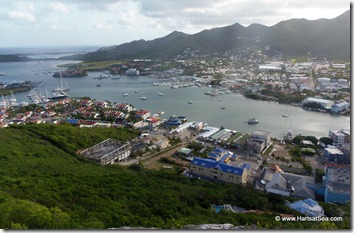 Last spring we visited St. Maartin. One day, EW set aside time to run around the lagoon collecting parts for his home-made underwater breathing apparatus. Lord only knows why I offered to join him. The jaunt consisted of going to one side of the harbor to a dive shop, over to the other side to a machine shop, back to the dive shop, a detour to a marine store, and back to the machine shop -- all via dinghy. That’s the harbor at right. We covered all of it, many times. Just as we neared the dock for the second machine shop visit, we ran out of gas. Somehow EW talked me into dropping him off (“Before they close!”) and then rowing to the gas dock. I had many offers of tows, but maintained my martyred dignity and rowed up to the very tall fuel dock.

The last part of this admittedly short journey was punctuated by encouragement from the local man working at the pumps. “You’re almost here, man!  You can do it!” He grabbed the line, tied it off, and handed down the nozzle. I carefully filled the tank, just as carefully handed the nozzle back up to him, and paid him. Then, I tried to start the motor. It wouldn’t start. I checked to make sure that the little red key thing that’s not a key was holding the kill switch. It was. I tried again. “Did you squeeze de ball?” the attendant asked, in his island lilt. “You have to squeeze de black ball until it’s hard.” Forgive me, the whole thing struck me as ludicrous, and I regressed 40 years. It got worse the more he insisted, more than once, “You haven’t squeezed the ball enough. De black ball has to be hard.” So there I am, a fifty-umpth-year-old, white blond, giggling like a seventh grader. Or suppressing the giggles as successfully as seventh grade girls do -- yeah, not so much. Ultimately, my young friend jumped into the dinghy and squeezed “de ball until it was hard” enough, and then started the engine. I tipped him well, and took myself and my giggles back to wait for EW on the other dock.

3. Finally, if you do run out of fuel, you mus’ squeeze de black ball until it’s very hard.

Great post Barb ... and I still love the ongoing debate about why you can't just leave that red thing / universal key in the dinghy - I guess we are never going to win that one.

You sure had me giggling withe that entry! :)

Good one Barb!!! De black ball, had me rolling.

We've renamed our outboard 'key', the 'Hart string'.... now we laugh and don't feel quite so unique when we forget to clip it in!!!!
Thanks for the great blog... we always enjoy reading it!

This post made me giggle too. I can picture you trying to hold back the laughter--just like when we were in that awful modern dance class together!!