Home Archives Profile Subscribe
The Mystery Pod
My Writing is Improving ... Understanding Photos, Not so Much 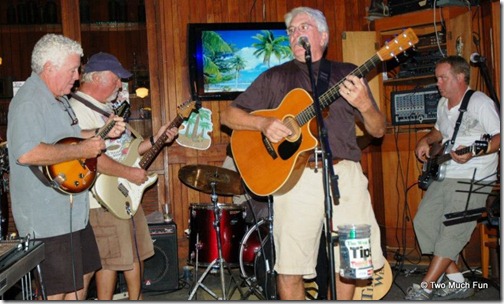 Well, not really a headliner, but he’s my MIE - Most Important Entertainer.

Those following our posts for the past two years know that EW didn’t just want to go cruising, he “wanted to go cruising and play music with other people along the way.” That world opened to him in Grenada in 2011. He joined every jam session at Whisper Cove Marina, and played with musicians from all over the world. Many of them had more experience than he did, and kindly shared their expertise with him. Peter Bonta, from Two Much Fun, invited EW to jam on their boat, and while we were anchored in Prickly Bay, EW often took the bus and walked for the 45 minute trip to play music with Peter.

EW’s music improved. He practiced alone and with others. He listened. He gradually developed his own voice and his “fierce rock star face”. He perfected “his” songs, and learned to accompany others on their favorite numbers. Last year in St. Thomas, Peter encouraged EW to join him at an open mic night at Tickles. They practiced and performed three songs, EW led one and Peter led two of them.  In Grenada this past season, EW again played with Peter Bonta, and another Peter – a professional musician from Australia, sailing on Jabaroo. We anchored in Clark’s Court Bay to be near the musicians and Whisper Cove Marina. Many Sunday nights EW and one or two others closed the place, to the enjoyment of Giles and Mary and their guests. In addition to jamming with the professionals and more experienced musicians, EW jammed with those who wanted his input and he was able to teach them a few things.

Living aboard, we have learned to work around each other and tend to state our desired projects/tasks/plans for the day. That way, if I must clean, he knows not to be in the main salon for a while. If he must change the oil, I’m banished from the Galley, where EW accesses the engine for that project. On Wednesday, I told EW that I “had to write today”, and he said that he wanted to practice for three hours this morning, asking, “Will that bother you?” I could truthfully reply that, “Your playing never bothers me.” He smiled. He wanted to read and have another cup of coffee and I wanted to sweep and straighten up the boat. After that, we both got down to our desired tasks, and I’ve been writing blog posts while he has been playing and practicing up for tonight’s open mic at Tickles.

It’s been a couple of weeks from his 2012 debut, and he’s a bit nervous about following up that successful night. It was magic. 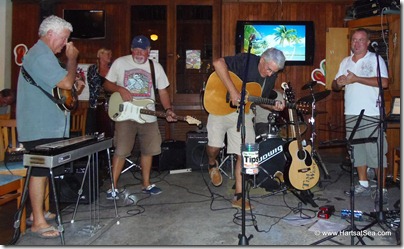 It was the first time EW had ever played with a whole band backing him up. Peter from Two Much Fun, played lead guitar, and musicians from the Tim West Band joined in. EW had drums, bongos, slide guitar, and bass backing him up along with Peter. Here he is checking his amped guitar. 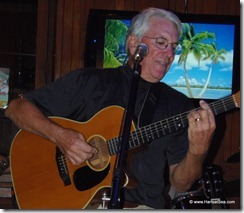 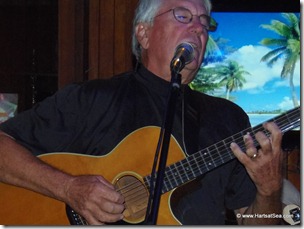 He sang three numbers, Front Door Blues, Stand by Me, and Teen Age Wedding. Folks danced to Stand by Me. 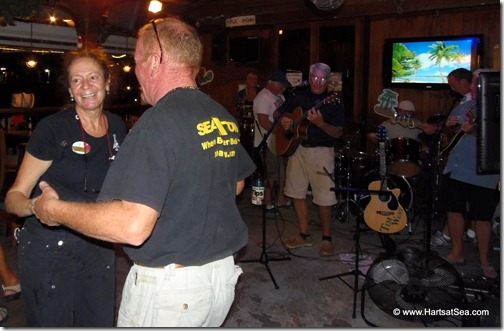 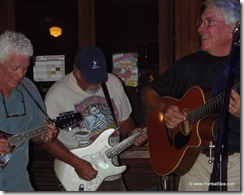 He hasn’t yet learned to “swallow” the mic, so we couldn’t always hear his words, but that’s improved. He had a ball. He performed very well, and he looked great up there, dancing around in his boat shoes, making his fierce rock star face, and passing on the solos to Peter or Mick on slide guitar and mandolin. 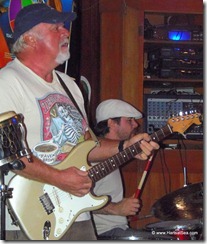 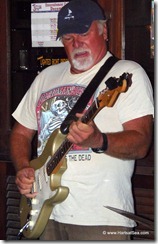 He was high for a week, and he deserved to be. It was his dream, and he has achieved it.

Thanks to LeeAnn from Two Much Fun for the first and last photos. Make sure you clink on their link. Two Much Fun offers charters for two, music included!

Read more about our adventures at sea and on shore in Harts at Sea - Sailing to Windward. The ebook is available for Kindle for only $2.99. 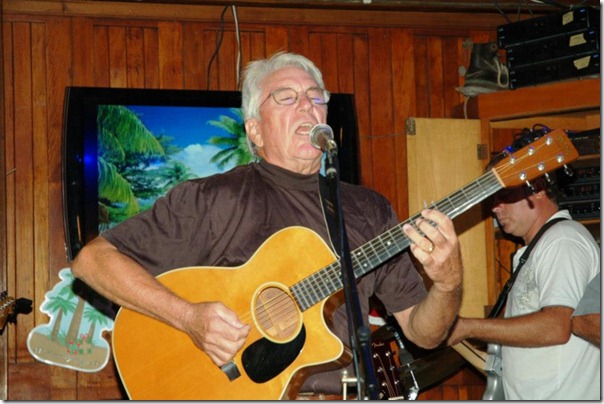