La Luna at anchor off the beach at Water Island. St. Thomas, USVI. 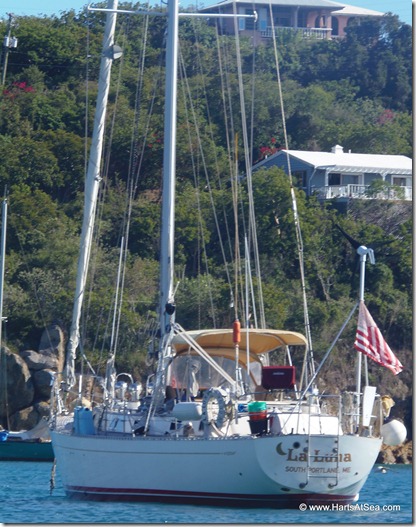 Where does the time go? We have things to do. Money to make. Cruises to Plan. Water catchers to sew. We have every intention of getting all this and more done, and we’ve been busy, but I haven’t crossed much off the list.

We are exercising. If we don’t walk, I do yoga, swim, or row the dinghy.

EW is in the midst of a round of medical appointments that must be completed in order for him to renew his Captain’s license. This is both annoying and interesting. He has this heart murmur thing and has had it all of his life. Over the past twenty years, doctors hummed and hawed and suggested a full cardio work-up and stress test. The results are invariably that EW’s heart is perfect in its own way – he’s special. One cardiologist thanked our primary care physician for referring “this unusual specimen.” We got a kick out of that.

The Coast Guard didn’t get a kick out of it and has required the full heart work-up yet again. Fortunately there is an excellent cardiac practice in St. Thomas and even more fortunately, they take EW’s insurance. It’s costing little more than a bit of time.

He had a physical last week and came home with the written report. He’s just fine but the doc made a note that he might want “age related counseling”. I’m not sure what that is but you can bet I’m having fun with it. There are just so many possibilities. It boggles the mind. On Monday, NPR announced that it was Ozzy Osborne’s 63rd birthday. EW stuck his half shaved face out of the forward head compartment and asked, “Who’s birthday?” I replied, “Ozzy Osborne is 63 today. You are older than Ozzy Osborne. Do you want age related counseling for that?” He is finding me less humorous as time passes.

I’ve spent time cleaning the rest of the haul out dust from the boat, organizing stuff, losing a battle with Toshiba and escalating it to the Better Business Bureau. I was evilly thrilled to find an email from Toshiba asking me to take “a minute or so” to provide feedback on my customer service calls. Believe me, they got an earful.

We purchased an iPad. EW is learning to use it and delighted so far. Figures that the first ap he downloaded is “Garage Band”.  We’ve also downloaded Navionics for charting, Find a Friend, SKYPE, Kindle, and a few others. This will be EW’s project, though I’ll learn to use the navigation part of it and we’ll get a waterproof case so it’s safe in the cockpit when we need back-up for our primary navigation system.

We finally met Chris and Ann from s/v Mr. Mac. Chris writes fantasy novels, for which he has won numerous awards. Friends aboard Sanctuary and Celebration recommended his books. I’ve now purchased all four in the Scimitar Sails series – how can you go wrong with fantasy and sailing combined? Start with Scimitar Moon and go from there.   Chris and Ann are just as nice as we had been told they were.

We also were delighted to be invited for sundowners aboard s/v Ganesh with Fatty and Carolyn Goodlander. We had met very briefly in St. Martin and spent a bit more time with Carolyn in Grenada when she joined us for the Friday Music night at the Museum when Fatty was under the weather. Both are great people. Carolyn is just one of those women I instantly like – it’s incredible how often that happens out here. Fatty is also a delight, and funny – but more than that, he’s wonderfully encouraging about my writing. Each time we’ve chatted he’s offered a caveat or advice or bit of wisdom and I greatly appreciate it. I don’t intend to take advantage, but I do intend to soak up every bit of knowledge I can. I have read Fatty’s articles for years, but never purchased one of his books. He’s published books since the eighties so shame on me. After I purchased Chasing the Horizon – he told me that was one of his favorite of his books. Can’t wait to read it.

So, now that the eating, exercise, and cleaning are on track I have three priorities.

1. Keep up the new eating, exercise, and boat maintenance programs.

2. Write four hours a day and promote Harts at Sea – Sailing to Windward.

3. Sew the awning/rain catcher. We’ve missed out on a bunch of free water so far as we’ve had some major rain storms during a number of nights – and a few showers during the day. Gotta get that done. This past weekend, I successfully completed the forward panel – the most difficult one.

I'm also determined to remember to enjoy the experience for all of you in the “north”. My nephew Brian – a Master Chief in the U.S. Coast Guard – is stationed in Hawaii. Poor baby had to bike to work in sixty degree weather last week, and Maine had snow over the weekend. It’s eighty-two here. I swim often after walking and before my shower. Just sayin’.

Tough life, but someone’s got to live it.

Speaking of books -- if you haven't checked out mine, it's about our first year at sea. We learn a lot. You can purchase Harts at Sea - Sailing to Windward for Kindle for less than three bucks. Makes a great gift.

Barb, thanks for all the new posts. I'm just catching up now. Lol. The tour of many foods sounded like a blast. I'm looking forward to more reading. Fun to hear the warm weather tales of the harts when I'm snow bound. I know you swim often, Ha! Float around a bit for me! My vacation this year was spent in a hotel on the las Vegas strip for a week. No peaceful beaches for sure, but lots of family time, Freddy was loving seeing his family and showing off Ava. So happy hubby, happy wife. Next time will be tropical!!! Xo Dar

While visiting in Ireland two years ago, my mother and I took a two-hour round trip bus ride from Dublin to a small village in the center of the country, and the total cost came to only 10 euros. Travel To India and everything is in bountiful as farr as natural beauty of the countryside is concerned. Isolated from the rest of the country, Kullu came into limelight under the British rule.