My Writing is Improving ... Understanding Photos, Not so Much

I’m delighted that the last three articles I’ve submitted to the Caribbean edition of  All at Sea magazine have been accepted. Gary Brown, the editor, has been encouraging and patient. I listened to well-known and accomplished author Fatty Goodlander when he told me to be a low-maintenance author: get my articles in ahead of time, edit when asked, and provide whatever the editor needs before he or she needs it. The minor problem has been the photos.

The most recent article accepted was about rowing the dinghy for exercise in St. Thomas. I had written a blog post on the subject earlier this year, but felt an entirely new article would be of interest in the magazine. The whole thing was prompted because friends Kirk and Donna had been anchored near us off Water Island and Donna had emailed photos of my rowing experience. I sent the article with the photos and found out that Donna’s photos didn’t have enough pixels.

Of course that meant EW was drafted as photographer. I assured Gary that there was a cruise ship slated to arrive in Crown Bay on Tuesday morning and EW and I sat on watch for her arrival. I readied Lunah Landah, while EW moved to the bow of La Luna. First, I rowed against wind and current to the bell buoy that I had mentioned in the article. EW took photos. I returned to the boat and reviewed them, offered suggestions, made a change in the camera settings, and took off again as the cruise ship turned into the channel. EW took more photos. After the shoot, I immediately chose the best, edited them, and sent them off to Gary.

Just one of these is usable PC181063. When we pull them up to full size, they are blurred/fuzzy. Not sure what kind of camera you are using? Camera/phone?  Also, they are on the edge of being too small.

Oops. I apologized to Gary and promised to get good photos to him ASAP. The deadline for each month is the about 40 days from publication – on the 20th of the month. Gary hasn’t told me whether the article would be published in February or March, but I wanted him to have the option for February so getting good photos to him was a priority.  Even so, we had a busy day yesterday, and I didn’t take the time to find out whether a cruise ship was scheduled for this morning. No problem. EW picked me up last night after a shopping trip, and we stopped by Tickles to grab a pizza to go. Outstanding Bartender, Lindy graciously looked up the cruise ship schedule and assured me one was going to arrive this morning. Sure enough, I got up to see a cruise ship just making the turn into the channel.

Whoa. This was an early ship, and we hadn’t yet engaged an accomplice to drive the photographer. Who was up? Well, EW, the photographer, wasn’t. The first order of business was to get him up and going. No morning ablutions, we had to move it. Into the dinghy, camera ready, oars in the oar locks, EW motored past boats in the anchorage to see who was on deck before 7. There’s one!  Nick from a lovely Hughes yawl, said he’d be happy to help, and asked, “When?” “Well, right now actually. We need to get in place for that ship,” said EW pointing to the Celebrity. Nick got a shirt on while EW transferred to his dinghy. I used the motor to get Luna Landah into position, then raised it and began rowing.

Nick and EW arrived within minutes and EW took photos of me and the cruise ship and of me going around the buoy. Then, EW and the camera transferred to our dinghy, and Nick went back to his morning coffee. I’m going to make him some cookies. The photos were in Gary’s inbox by 8 AM. He’s happy, and thanked me for “Going the extra mile.” I’m happy. EW and Nick will be happy when I give them ginger cookies.

You can’t see that article yet – but here’s my article in December’s All at Sea. There’s bacon in it.

Here’s my favorite rejected photo. Both EW and I love the ‘TUG’ notice next to me. As if.

By the way, the gist of the article is that whenever I row the dinghy from this bay, I am inundated with offers of a tow. This never happened in Grenada or St. Maartin. It happens with much less frequency in Long Bay here in St. Thomas. So, while we were taking the rejected photos on Tuesday morning, three boats stopped by to offer a tow. One was this very large inflatable from the neighboring power yacht. NOTE: I did not try to send this photo to Gary. EW said that I didn’t allow the “rescuers” close enough for a good shot. 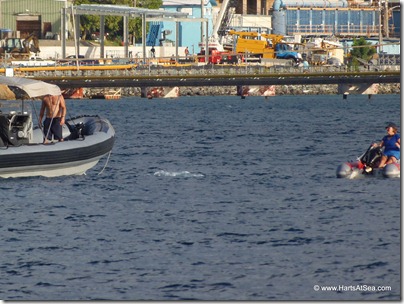 Read about our first year at sea: Harts at Sea- Sailing to Windward is avaialble for Kindle for only $2.99.

Hello Harts! I was at an "End of the world" party last night with some sailing friends. One of them (Jim) mentioned he and his wife were going to the USVI in Feb. to spend a few days on a sail boat with friends. Since Jim is the one who told me about you guys and your blog two years ago, the natural next question was "Is it on Laluna with you guys?" YEP! Small world isn't it?