Hope you all had a happy turkey day. We did – just as planned. This year Thanksgiving fell nearly two weeks after I had begun a (for lack of a better term) diet.

It’s past time. While I lost some weight traveling down the US coast two years ago, all of those pounds are back and they brought friends. I hate that. I’ve been fretting and complaining and smirking in disdain at every photo and I hate that, too. Here are things I’ve begun to understand about me and food, weight and fitness:

(Don’t worry, we’ll get to two absolutely super recipes, one of which is certainly not suitable for dieting – or you can skip down to the bottom of the post. I won’t mind.)

Back to what I’ve learned:

1. Next to EW, Mo, family, friends, and our two late Labradors, I have love carbs more than anything. They love me, too. Carbs are a beautiful thing: they come in many varieties, go with every meal and with every course, can be savory or sweet, and pretty much always beget more carbs.

2. Exercise is a beautiful thing. I am learning to love exercise again, although we were estranged this season in Grenada. I got lazy. I carried on a love affair with carbs and ignored exercise as if he were a justifiably hated ex-boyfriend.

3. That body I had in my twenties? That one I still wouldn’t have put in a bikini or two piece swim suit? That one that had thighs that never touched, a smallish stomach, breasts not meant to go braless, cheekbones, and one chin? (See the photo of me and my mom from the last post.)  That body? That was the best body I’ll ever have and I didn’t appreciate her. I saw her flaws (short waist, bit of a stomach) and didn’t treat her right. I fed her carbs to alleviate stress, drank too much Chinese Beer at Three Dollar Dewey’s (the old, small, quaint one) in Portland, exercised only sporadically, and contrived to never stand naked in front of a full length mirror. I am sorry, My Twenties Body. You were beautiful. If I could give a gift to every young woman it would be to have her understand how beautiful her body is, right this minute.

4. It is up to me whether I will be seventy years old and look back on my fifties and say, “That body I had in my late fifties? That was a beautiful body. Fit, happy, healthy, It was a body in love with exercise, good food, and moderation. I am proud of that body. I love that body now, and I loved it then.” (Even though I still may have not put a bikini on her.)

5. So, I’ve started a diet plan that I actually paid for. I’m a little embarrassed about the paying-for part, and have started writing a weekly journal post about the diet and the process. I’ll share that at a later date. For now let’s just say that from Monday, November 12 through lunch on November 21, I had  zero sugar, caffeine, white flour, simple carbohydrates, fried foods, cheese, or meat of any kind – and I began to exercise daily. The first two days were a struggle and I’ve had two personality shifts in the process. On day two I acted as if I had the worst case of PMS in the entire world. Both EW and I are thankful that only last 24 hours.  A week into the program, I suddenly realized – and EW has confirmed – that I was a nicer person. Softer. Hmmm. That’s not just from the exercise of walking, swimming, and yoga, because I’ve done that before. It’s either the lack of caffeine, or sugar, or tons o’ carbs, or all three. I’m not sure which, but I want to hold on to that feeling. (Cue the uplifting orchestral music and an exuberant jump in the air.)

6. On day six of the diet I suddenly got a clue that Thanksgiving – my favorite holiday EVER – was literally around the calendar corner. Deep breath, soften, relax, lifestyle change. I went off the diet reservation for one twenty-four hour period, making sure I drank a lot of water, had a healthy snack option on the appetizer table, and chose to eat as much as I wanted of only my favorite Thanksgiving things. I’m not going to tell you that I didn’t eat too much – because I did eat too much. I have a lot of Thanksgiving favorites. But I did eat more vegetables and fruits – and not just in pie – than I have during past turkey days. Now, I’m back on the plan until Monday, when I’ll move to a different phase for a long-term weight loss plan.

If this program doesn’t work for a long term weight loss, I’ll find something else. I’ve learned enough during these two weeks to help me keep weight off  and to give me incentive to be nicer to my lovely body. That’s certainly worth the forty something dollars I spent on the program.

For our turkey day with the St. Thomas Harts, I provided two healthy or healthier dishes, and one flat out decadent pie. Here they are: 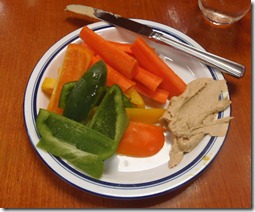 1. My new favorite lunch consists of raw veggies and Tribe's Forty Spices hummus. I don’t feel deprived at all – even when EW is seated across from me, eating a ham and cheese sandwich with corn chips. That’s a very good thing. I took the hummus and veggies to the Harts and ate more of that than the other appetizers – including the wonderful selection of cheeses. Additional Note: While chick peas are easy to purchse -- uncooked or canned -- in the Caribbean. I can't be sure that this spice hummus will always be avaialbe to me. I was delighted to find a recipe on the 28 Cooks blog. Everything there is easily found in the Caribbean.

2. I was asked to take a squash dish with added protein for vegetarians. I found a butternut squash recipe in my beloved The Gourmet Cookbook, edited by Ruth Reichl. Here it is:

Method: Put a rack in the middle of the oven and preheat to 450 degrees Fahrenheit

Toss squash with 1 1/2 tablespoons of olive oil on a baking sheet with sides, then spread out in one layer. Season with salt and pepper and roast, stirring once half way through, until squash is tender and pale golden, about 30 minutes.

While squash cools, heat remaining 4 tablespoons of oil in a 10-inch heavy skillet – over moderately low heat. Add almonds and cook, stirring constantly, until golden, about 3 minutes. Season with salt and pepper, pour almonds and oil through a fine-mess sieve set over a large bowl and cool until warm, about 10 minutes. Whisk lemon juice into cooled oil until well combined and season with salt and pepper. Add squash, spinach, and half of the almonds to the bowl and toss gently to coat. Serve squash and spinach sprinkled with remaining almonds. If you want more flavor crumble Roquefort, Stilton, or Blue Cheese on top.  Serves six.

Barb’s Notes: EW peeled and chopped the squash – the hardest part. I cooked the squash and almonds, and made the dressing on board. On shore, once the turkey was out of the oven, we heated up the squash and I assembled the dish as directed above. It is absolutely delicious cold the next day. The amount of olive oil may not make this a diet dish, but it is certainly a healthy option. I also love it because the ingredients are easy to find on any Caribbean island. NOTE to other Cruisers. This will be my pot luck dish of choice until I’m tired of it. I call dibs. 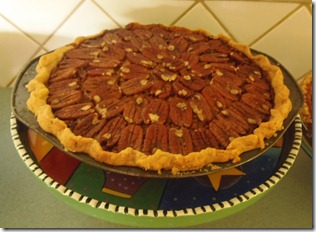 3. As I’ve said before, ever since we went to Austin for a wedding and purchased Texas Home Cooking, by Cheryl Alters Jamison and Bill Jamison, I’ve had to make this pie for EW. They call it Perfect Pecan Pie.  EW and I call it Texas Bourbon Pea-CAHN Pie. I can’t find the quote in the cookbook this morning, but I swear I had read a caution that Texans take great exception to the New England pronunciation of their favorite nut, so I’m going to put it in quotes anyway. “A PEE-can is something you keep under your bed. You eat a pea-CAHN.” Well there.

In a large heavy saucepan, melt the brown sugar, syrup, and butter together with the bourbon, vanilla, and salt. Continue heating the mixture to the boiling point, stirring frequently. Boil for 1 minute, stirring constantly. Remove the pan from the heat, and let the mixture cool.

In a bowl, beat the eggs with the half-and-half until they are light and frothy. Add the mixture to the cooled syrup, beating until the mixture is well incorporated. Stir in the pecan pieces. Pour the filling into the pie shell. top with a layer of pecan halves. Bake the pie 45 to 50 minutes, or until a toothpick inserted into the center comes out clean.

Serve warm or at room temperature. Personally, I believe that whipped cream belongs on strawberry shortcake and not much else, but if you feel differently, by all means have at it.

Barb’s Notes: I once purchased pecans in the shell. Neither EW nor Mo enjoyed the experience. Cane syrup is sometimes easy to find – but not usually in Maine. I wish I had purchased more in Florida on our way south and used the last of it yesterday. I have often purchased pure cane sugar in ethnic stores in Maine and melted it down to get the cane syrup. That works as does the chefs’ options above. I stopped buying half-and-half for recipes while cruising. We just don’t use it up and it’s hard to store in the fridge. I used canned evaporated milk. If I'd had any canned cream on board I’d have used that.  Finally, I made a note in my cookbook about a tip from Cooks Test Kitchen that suggested using vodka for 1/2 the water in a pie crust to make a flakier crust. You have to add a bit more liquid than normal if you do this. I use Bourbon in my crust for this pie. How decadent is that? No way in hell is this a healthy recipe, but is sure is good.

Just in time for Christmas -- I wrote a book. Not really. It's been out for a number of months -- but it would make a lovely Christmas gift. The Kindle edition is only $2.99. Check out The Harts at Sea -- Sailing to Windward.