Our friends and family don’t seem to worry quite so much about us as they used to. After all, we’ve been out here for two years and things have been boringly unexciting in terms of wind, waves, and weather and other dangers—particularly this year. But this morning, I received a Facebook message from a dear former neighbor who wondered where we are and if the hurricane had threatened us. We’re fine. No wind, no rain. In fact, it’s unseasonably hot in Trinidad – we know this because all of the locals are complaining about the heat. You know it’s hot in Trini when ….. well, you get the idea.

Lately, we’ve had more reason to worry about the weather for the folks back home. From that b—ch, Sandy to the earthquake/tsunami, we have friends and former sailors, and nieces and nephews in the path of potentially dangerous events.

EW and I are fortunate to have wifi on the boat. It isn’t often strong enough for SKYPE, but we can get online. Others in the harbor have to go ashore to hook up, so when someone announced on the cruisers’ net that there had been an earthquake in Vancouver and a tsunami threat in Hawaii, I dove for the laptop. Both EW and I have nephews in Hawaii, and I also wanted to find out where Sandy was in terms of the Carolinas, Chesapeake, New Jersey, and Boston – where cruiser friends and family are located.

Of course, then I find out that the bi—h Sandy is now expected to head north to the Buffalo area – where EW’s from. So more family to worry and wonder about.

Seriously, people. Maybe you all better take up cruising. It just isn’t safe back home.

So – here are a few photos from the “Fun in Trini” file. NOTE: EW is killing the work projects. Just crossing things off his list left and right. I love EW.

EW participated in a music jam with two families, one from Wales and one from France, and a few other cruisers. Singing, guitars, and recorders. Lovely. At the first opportunity, we had Doubles for lunch when in Port of Spain. 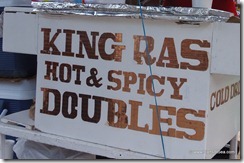 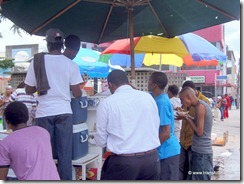 At my first opportunity, I played dominoes in the Sunday game. One of the group brought a tub of ice cream. Linda got the last of the seconds. 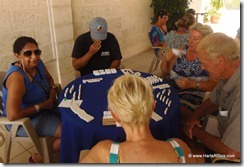 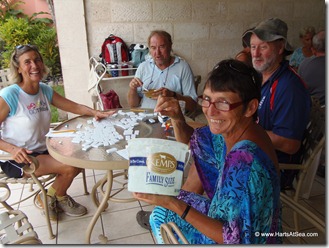 We’ve been to a pig roast at the local yacht club and two potlucks at the next boatyard. Someone brought a bag of marshmallows and Blake and Sofia enjoyed cooking them to order, while we all talked and relaxed. 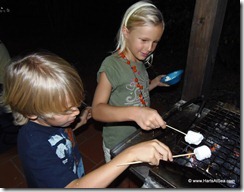 Last night, we met up with friends Chris and Jackie from s/v Higheeled. They’re from Canada, and they play euchre. We get together whenever we’re in the same port. Last night the ladies won. Big time. Victory dance and fist bumps were obligatory.

Thank you for your concerns. We’re fine. And we’re getting work done – really.

P.S. – for you euchre players – I ordered up trump when our opponents picked up the right bower and won the hand. TWICE!  More fist bumps. My mother-in-law would be so proud. EW wants me to note that we won two out of three. He doesn’t consider that “big time”.  Tough. He’ can get his own blog. Since I lost for years before we went cruising, if I’m on the winning side, it’s “big time”.